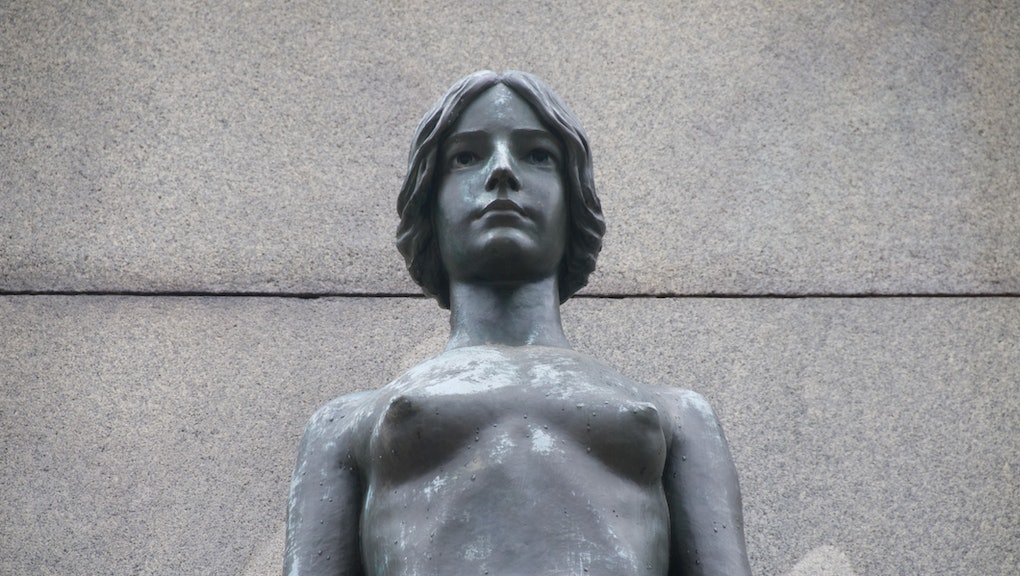 Why Young Women Are Snapping Shots of Their Boobs on Things

Mamming, verb: the act of putting your boobs on things, snapping a picture, and then uploading it online (often with the hashtag #mamming).

But it's so much more than that, says New York-based Michelle Lamont, one of the two advertising creatives behind the viral mamming campaign that hit the internet over a week ago. "Mamming is about mimicking a mammogram to show solidarity with the millions of women whose lives can be saved by awkward but important screening techniques — like mammograms and self-exams," she says. As a 25-year-old survivor of breast cancer with a double mastectomy, Lamont's personal story was behind her brainstorming of the initiative.

While most of the team behind the campaign is based in the U.S., it has gone far beyond American borders. Type "mamming" into Twitter or Google and you'll see people from Spain, France, and Italy also talking about the trend and the video:

Boobs aren't required. Anyone — men, babies, dogs — can jump on the mamming bandwagon.

The incidence of breast cancer in younger women — loosely defined as women under 40 — is incredibly low, yet the heavy use of Twitter and Instagram to spread the campaign is aimed at a social media-savvy, millennial audience. Most of the faces we see in the video and on ThisIsMamming's Instagram appear to be faces under 40. Feminist Campus, a feminist and pro-choice student network, is taking their own part in the Instagramming process.

But the youthful audience seems to be the point. Besides Lamont, I spoke to two other women excited about mamming.

"Young people, more than ever, are dealing with breast cancer," Carmen Rios from Feminist Campus told me. "This campaign uniquely allows them to confront those fears with laughter and community support."

Louise Addis, a 29-year-old based in Johannesburg, South Africa, says she thinks mamming naturally followed "the list of planking, owling, or supermanning...Mamming will hopefully appeal to the younger crowd, we all know how much we like taking selfies."

While the campaign welcomes male, female, animal, and baby mammers alike, the sexualization of breast cancer campaigns, most recently Motorboating for Breast Cancer, has raised concerns that boobs and not the women behind them are the focus. And mamming, Lamont says, has not been exempt from this same set of concerns and scrutiny.

But "taking sexy selfies" is not what most people are doing, she elaborates. "Sometimes people will take sexy pictures. We can't control that. Our vision isn't that," she says. "Obviously you can't talk about breast cancer without talking about breasts. But we wanted to talk about it in a funny way."

Since mamming's a relatively new trend, I can't quantify whether or not it will have a significant influence. I know I laughed when I saw others mamming, and I can imagine how many "likes" a picture of me mamming would get on Facebook but, more importantly, I'm more self-aware about my need for mammograms and self-exams.

Mamming is not just another pink-washing scheme. Unlike the typical internet slacktivism, mamming is more than just an "Instamoment," as Rios puts it. Mamming has the explicit purpose of educating and breaking down the stigma around breast cancer while still keeping it edgy and shareable on social media.

While the men behind Motorboating for Breast Cancer certainly did raise $7,000, and went viral, they did so at the expense of sexualizing female bodies. Mamming is proof that you can go viral and educate a young demographic without saying, "Save the ta-tas!"

"But where's the cure?" you might ask. "Where's the money going to breast cancer research?"

Lamont's doctor's response says it all: the cure is going to be prevention. That is where mammograms come in — especially early mammograms. Lamont and other mammers hope that putting boobs on things for a cause will have you laughing all the way to the doctor's office.