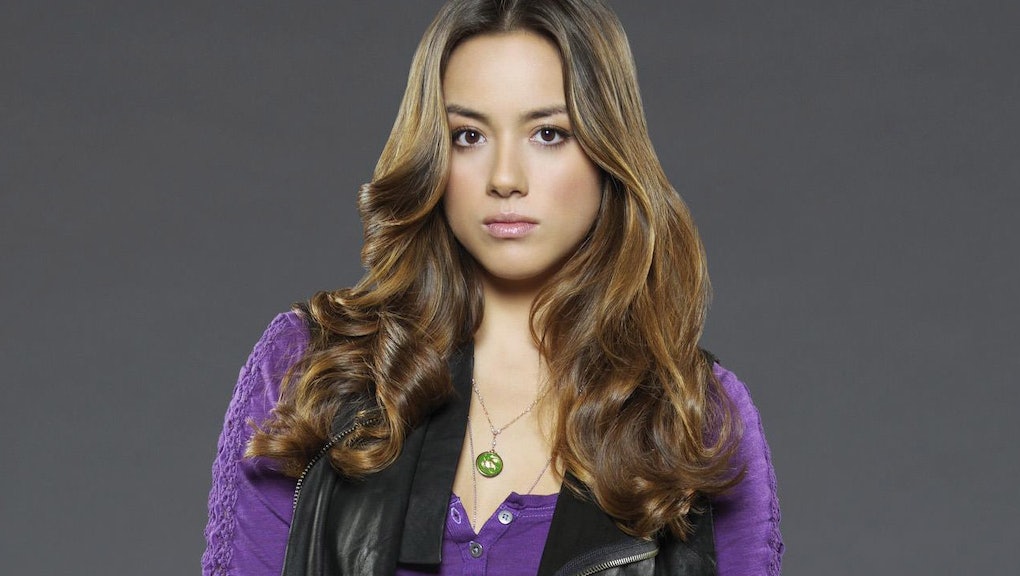 The episode opens on Chan, a street magician in Hong Kong with moderate pyrotechnic abilities. One immediately has to wonder why Chan hasn't used his powers to become the next David Blaine. As a street magician, gaining this talent seems like a miracle. But it seems SHIELD discovered Chan soon after he began to exhibit his powers publicly and added him to "the Index," a group of super-powered individuals SHIELD helps protect (by keeping their powers under wraps).

SHIELD correctly assessed that there are some who would take advantage of Chan's new found skill. That certainly seems to be the intention of the mysterious woman in a flower dress named 'N' who abducts Chan in the opening sequence.

Who are Chan's captors? None other than Centipede, the evil organization behind the experiments that gave Mike Henderson superpowers in the pilot. And how, pray tell, did Centipede discover Chan's location? The Index was leaked by the Rising Tide. Ruh-roh Skye!

Skye's loyalties have been a major question since the series premiere. The episode shows Agent Grant and Skye bonding early on; Agent Coulson brags to Agent May about how well she fits in. Pretty bad timing for a display of confidence in Skye, what with her secret organization leaking an important document that would be of most interest to an inside agent.

Meanwhile, Chan quickly becomes a willing hostage when the woman in the flower dress promises him the fame he has always desired. "They don't remember Steve Rogers, but they do know Captain America." She gives him a superhero name: Scorch. Apparently nascent supers are suckers for names because Chan lets his captors go wild with experiments.

Skye's off the hook when she helps SHIELD locate the hacker behind the leaked Index. However, the hacker turns out to be Skye's secret, sexy, bearded hipster boyfriend, Miles.

Miles and Skye have an obviously complicated past. He's a talented hacker (he leaked that shirtless horseback picture of Putin) and they got together when Skye was "really messed up." While he espouses a ton of Julian Assange-esque principles about freedom of information and respect for due process over concerns for national security, it turns out he received a million dollars for leaking the Index to Centipede and the world. "That kind of money could change my life, our life," Miles pleads to an ideologically betrayed Skye. Looks like someone is dumped (though Ward seems to be pretty hurt by Skye's secret boyfriend; sorry 'shippers).

The Centipede agents believe Chan's super-powered blood platelets could accentuate the Extremis element of the Centipede serum. However, after they've extracted them Chan cannot use his pyrotechnic powers without burning himself. Chan goes off the deep end, attacked Agents May and Coulson when they arrive on the scene to save him. Like many others who have used Centipede's experimental super serum, Chan's newly supercharged powers overcome him, but not before the girl in the flower dress escapes with a new and improved serum prototype.

What Worked: This episode helped progress this season's arc significantly. We've got a motivation for Skye. She's not a secret agent, but she does have her own agenda: she's searching for information on her long lost parents. It seems pretty darn important to her, given that she was willing to abandon her sexy boyfriend and live in a van in Los Angeles in hopes of getting swooped up by SHIELD. It's obvious she cares about her SHIELD teammates, but the obsessiveness of her search might be dangerous.

What Didn't: It's obvious now that the past three episodes felt like filler because they were filler. The writers of SHIELD were building a team to make Skye's betrayal hit harder. The fact that this tactic was so obvious is a sign of creative laziness; the writers have a lot of episodes to fill, and fans won't wade through many more episodes of fanboy pandering to get to the content that will actually makes us care.

Also, the dialogue has taken a major nose-dive since the pilot, in large part due to Joss' absence from the writer's room. It's hard to even call this a Whedon show at this point.

Easter Eggs: We finally got a post-credits scene that was worth watching for more than a nerdgasm. Who is the "clairvoyant?"

Assuming the show is going to use an established character here, there are a ton of future-seeing supers in the Marvel Universe to choose from. But we've got a couple of ways to narrow this down. First, the individual is probably a baddy. Second, Raina noted that this particular clairvoyant does not like to be touched. Given that this is a Whedon enterprise, I will bet you this character is a strong female. With all those factors, I'm guessing it is Cassandra Webb from the Spiderman books or Blindfold from X-Men (perhaps a way to weave in those Marvel titles with The Avengers?). But really, it could be anybody.

We also got a hint that Skye's mysterious parentage might be superpower related, given SHIELD's apparent involvement in her adoption. Could she be the child of supervillains, a la The Runaways (an excellent Marvel comic that Whedon has done some writing on)? I'll be looking into that more during the next week's break. Episode 6 will air November 5.