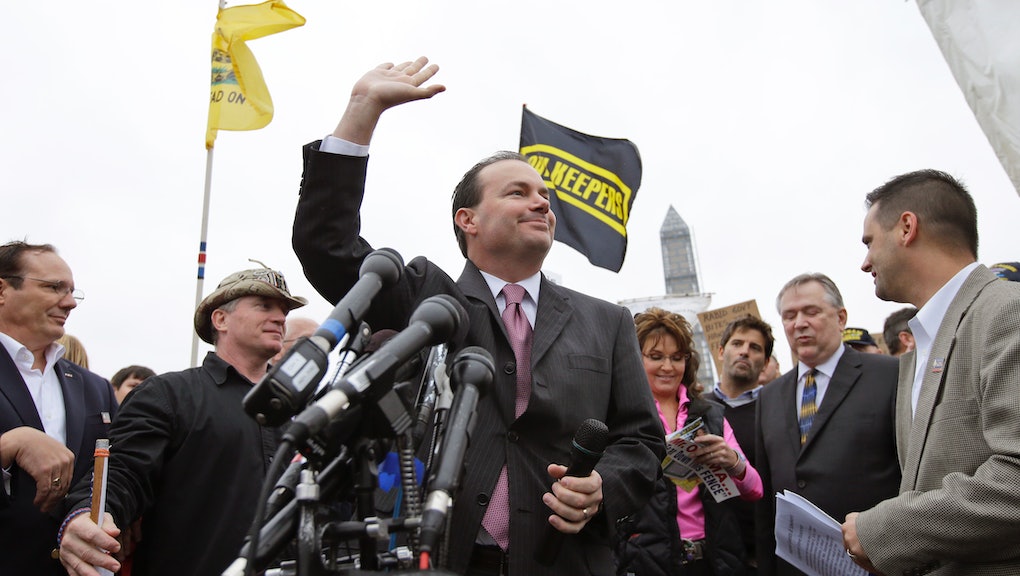 Sen. Mike Lee is So Conservative Even Utah Doesn't Want Him

It's official: the Tea Party is disintegrating faster than a box of British tea tossed into the Boston Harbor. How do I know this? Well, aside from reading polls showing that most Americans drank their fair share off tea long ago, I looked west and noticed that even Utah — probably the most Republican state in America — is getting sick of its Tea Party politicians.

That's right, apparently even the most conservative Utahns recognize that shutting down the federal government for 16 days was probably a bad idea. As a result, some prominent Utahn Republicans are rightly angry at Sen. Mike Lee (R-Utah), who, alongside Sen. Ted Cruz (R-Texas), pushed hard to prevent the government from re-opening in an unsuccessful bid to undermine Obamacare.

As the Washington Post recently reported: "Lee's approval ratings in Utah have cratered, and prominent Republicans and local business executives are openly discussing the possibility of mounting a primary challenge against him. Top Republicans are also maneuvering to redesign the party's nomination system in a way that would likely make it more difficult for Lee to win reelection in 2016."

This development is important because Lee's downfall more than anything else would demonstrate that the Tea Party's popularity has finally (thank God!) come full circle. When Lee won in 2010, his election represented the imminent rise of the Tea Party. It is fitting for his downfall to mark the party's end.

Alas, Lee has not fallen yet. An overwhelming majority of Tea Party members still support him, and he has more connections to lobbyists, and thus a larger campaign "war chest," than many senators who are his senior. Nonetheless, this might not be enough. Without the support of moderate Republicans, Lee may very well lose re-election unless he shifts to the middle. As A. Scott Anderson, one of Lee's former campaign donors, puts it: "I think people admire him for sticking to his guns and principles, but ... there are growing frustrations. If things are to happen, you can't just stick to your principles. You have to make things work. ... You've got to be practical."

Fortunately for liberals like myself, if there's one thing members of the Tea Party are bad at, it's being practical. (Just ask Cruz.) And that is exactly why Lee won't be the last Tea Partier to fall.