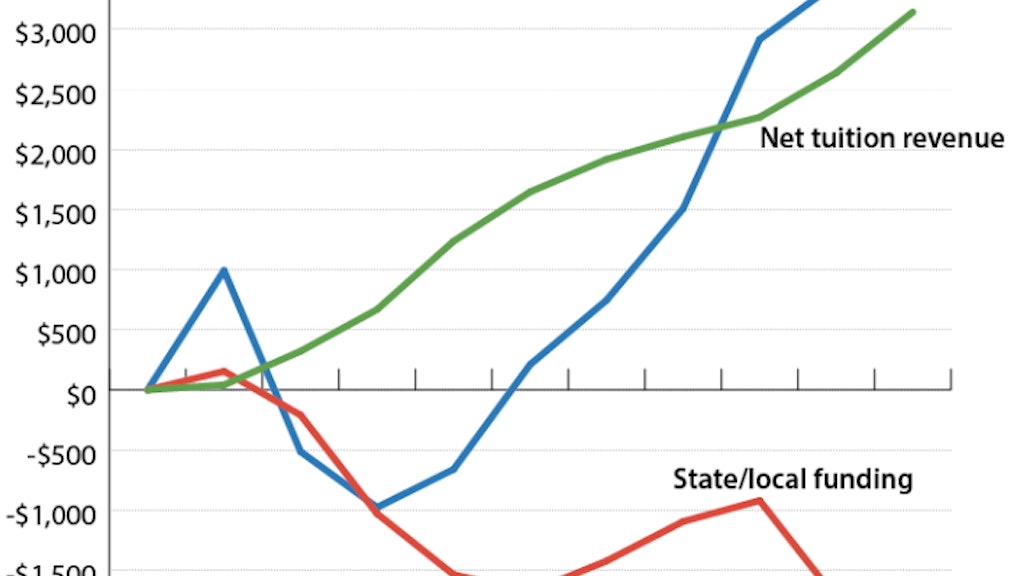 Exactly Why Today's College Students Are Screwed, In One Chart

The cost of a university degree has risen by a mind-numbing 1120% since 1978, condemning many millennials to decades of debt.

In theory, public universities are the bastions of the meritocratic American dream, allowing students from all economic backgrounds to pursue higher education and enter the field of their choosing. In practice, funding cuts over the past 10 years, coupled with increased spending, have put an undue burden on students, and caused tuition at state schools to skyrocket even more than that of private colleges.

So a new report from the College Board that shows that tuition at public universities is increasing at a slower rate than it has in 30 years is hardly cause to celebrate. What the College Board has actually said is, “Things are still getting worse, but they’re not doing so quite as fast.”

It’s the equivalent of having a firefighter tell you that your house is still burning down, but doing so less quickly. Or having a doctor tell you that a painful rash is still expanding to cover your entire face, neck, and back — but, huh, what do you know, it’s spreading less rapidly than they’d expected.

This problem is summed up in the following chart, which shows that tuition increases across all U.S. colleges (public and private) can't keep up with spending at these schools.

According to a report by the Delta Cost Project, tuition not covered by financial aid increased by well over 50% at public research universities between 2000 and 2010. And rising tuition isn't the only problem. The College Board (a company that may have ulterior motives for promoting higher education) itself acknowledges that the slowing has been accompanied by reductions in federal grants to students.

If tuition ever comes back in line with the income of the average American family, permitting people to pursue a four-year education — and even graduate degrees — without hesitation, we'll have reason to celebrate. In the meantime, we'll just be sitting here in the shantytown that abuts the charred remains of our financial history, licking our wounds.