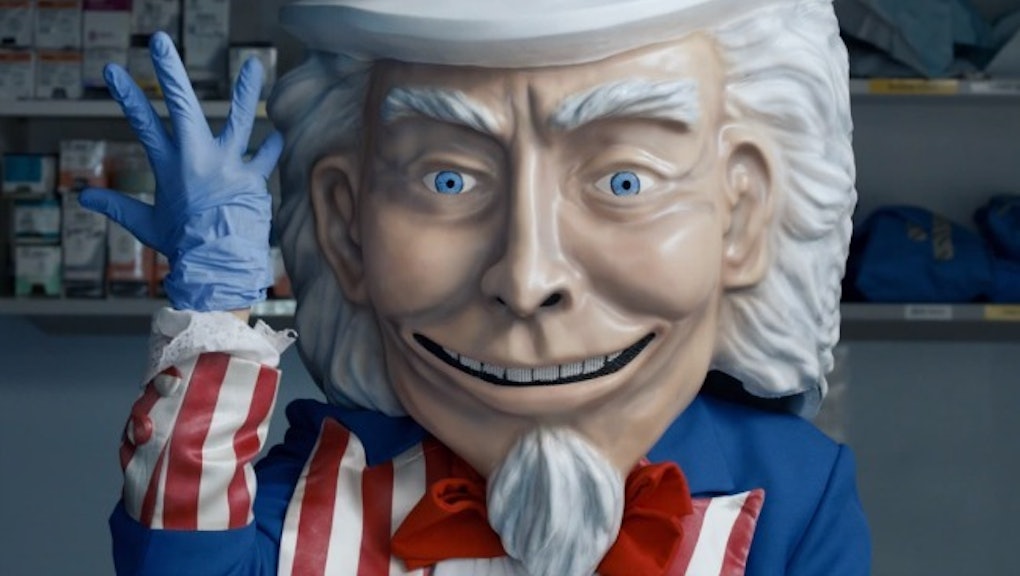 What does the Affordable Care Act mean for you? Here's a handy little guide for navigating Obamacare.

1. Can You Buy Barack Obama Bobble Heads On Healthcare.gov?

No, but you CAN buy health care.

Although the Affordable Care Act (ACA) was signed into law on March 23, 2010, it is just now beginning to take effect with the launch of Healthcare.gov, a website where Americans shop for health coverage. The website functions like a cyber "marketplace" (note the decidedly capitalist wording here) allowing customers to compare the costs and benefits of a wide variety of different health care plans and ultimately choose one that works best for their financial and personal situation. Keep in mind that while Healthcare.gov regulates the insurance marketplace, the plans you purchase on the website are private.

2. Why is Samantha Mumba's Evil Twin On the Healthcare.gov Homepage?

But whoever the smiling face on Healthcare.gov is, political consultants probably spent a lot more time poll testing her demographic appeal than setting up the Obamacare website.

The reason we're hearing so much talk about the ACA website these days is because there have been significant technical problems since its launch a little over three weeks ago on Oct. 1. Specifically, the servers couldn't support the heavy influx of traffic, which made it virtually impossible for anyone to sign up for the exchanges. The government is working to fix the problems. While this won't threaten the program, it is a major snafu.

3. I’m Bored, Can I Pleeeeease Go Back to Shopping On Gilt?

Although the problems with Healthcare.gov are frustrating if you are among the 20% of uninsured Americans attempting to sign up, you don't have to navigate the website if you already have health insurance.

Keep in mind, this doesn't mean your coverage won't change at all. Although the ACA aims to allow the approximately 80% of insured Americans to remain on their health care plans, insurers must comply with the ACA regulations.

Some of these regulations include: banning yearly dollar limits for medical treatment, allowing children to stay on their parents' health care plan until the age of 26, setting new standards for free preventative care, and requiring insurers to cover people with pre-existing conditions. This means that some individuals who purchase there own insurance will see higher prices, unless they qualify for government subsidies.

4. Wait, Does My Effed Up Nose Count As a Pre-Existing Condition?

No. A nose job is cosmetic surgery.

The most controversial aspect of the ACA is something called the individual mandate, which was ironically first proposed by the conservative think tank the Heritage Foundation in 1989. The mandate requires all U.S. citizens to purchase health insurance or pay a tax penalty (which for 2014 would be $95 or 1% of your yearly income, reaching $695 or 2.5% of your yearly income by 2016).

5. Can I Just Get That New Patagonia Instead?

A down jacket will keep you warm, but you could still get sick.

It's critical for millennials to understand, research, and read about Obamacare because its success ultimately depends a lot on them. Young people are both the cheapest demographic to insure, and the least likely demographic to want to buy health insurance, which means their participation is necessary to make health insurance affordable for those with higher health care costs, such as seniors.

The basic premise behind the mandate is that if young, healthy people wait until they're old, sick people to purchase health insurance, it will drive up the cost for everyone else. Moreover, since Obamacare limits the ability of insurance companies to deny coverage to people who are sick, without the mandate, there would be no incentive for healthy people to purchase coverage until they need it, thus raising premiums and causing more healthy people to drop out of the insurance pool. This would balloon the cost of care until it was no longer affordable.

So, long story short, I guess it's all about us again. Great…