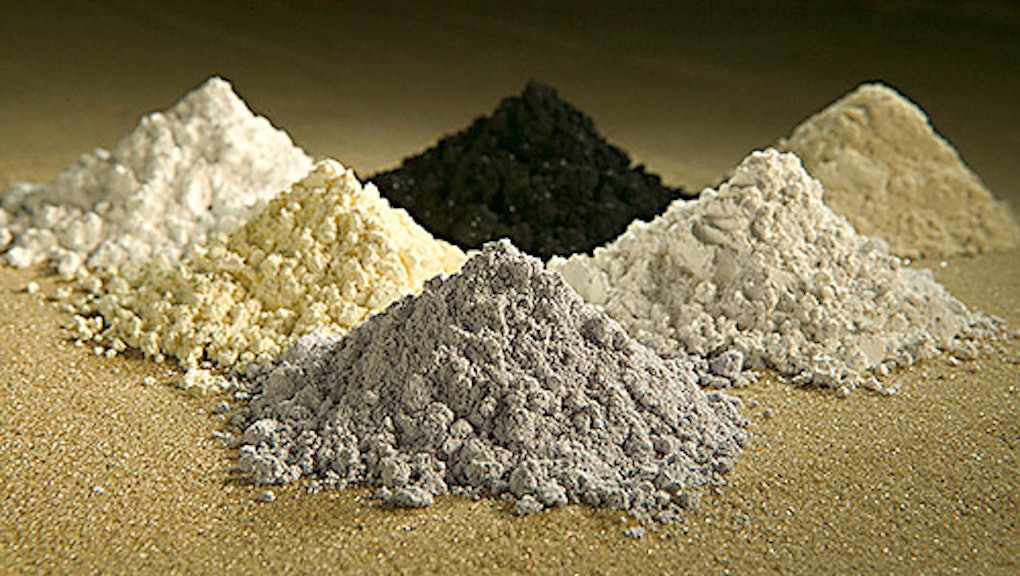 Rare Earth Elements Power the World, and China Controls Them All

You might have wondered if the meat you buy is free-range or if the coffee you buy is fair trade, but you probably haven't given much thought to the construction of the laptop or smartphone you’re reading this on. I’m not talking about plastics, aluminum, or gold: I’m talking about rare earth elements, or REEs for short.

REEs are made up of 17 chemical elements on the periodic table, all of which are used in cell phones, monitors, car batteries, guided missiles, fiber optic cables, and wind turbines, among other things. While products made with REEs have become more widespread globally, their production remains far more localized. China has entered as a key player in REE production in the past couple decades, producing well over 90% of the world’s REE supply, but the government reports it just has 23% of known reserves. So how did we get to this point?

It wasn’t always like this: India, Brazil, South Africa, and the United States all produced REEs in the 20th century, but their share of the market shrunk once China got in on the game. Speaking about the REE-rich Inner Mongolia Region, Chinese Premier Deng Xiaoping said, “The Middle East has oil. China has rare earths.” And there the story begins. The Chinese government’s push to accommodate REE production and processing, coupled with lax environmental and labor regulations, allowed China to produce cheaper REEs and over the years as output increased, prices dropped even further, causing many mines across the world to shut down.

This lopsided business arrangement did not cause much of a stir until Japan and China engaged in another spat over the Senaku Islands in 2010. Although its government denies such claims, China reportedly restricted Japan's access to certain rare earth elements, where a significant share of industry uses REEs. This sent Japan looking for alternative sources.

China’s behavior towards Japan worried some observers who feared this could become a pattern,  so the United States, the European Union, and Japan jointly pursued a complaint against China through the World Trade Organization. Unfortunately, it will likely take years for the case to be settled, leading countries and mining firms to take matters into their own hands. Plants in California, South Africa, Malaysia, Australian, and Canada are all in the process of gearing up to start production of REEs.

Bear in mind, this shift won’t take place overnight and it will take a decade or two to see any significant change. Exploration of deposits and dealing with regulations and permits, and gaining industry experience — not to mention the costs of such an operation — are all hurdles other countries will face in the coming years.

So where does this leave us in the meantime? Well that's where good old fashioned resourcefulness and innovation come in. Japan has started to religiously recycle used electronics, salvaging the various metals that would otherwise go to waste. While recycling will not put much of a dent in global dependency on Chinese REE production, REEs are not renewable resources so sustainability is applauded. Scientists in the United States and UK are working on substitutes for some REEs, particularly those used in magnets, with materials found outside of China. Doing so could resurrect dormant industries or start new ones in countries looking to break into the REE market.

The future of REE production is not entirely clear, but the implications of its geopolitical and economic value are. The expanding market that uses REEs for domestic applications is sure to put strain on these minerals' slowing production but also ensure its relevance in modern technologies. The use of REEs in military hardware translates into what some deem as a national security issue, a claim made stronger in light of the Chinese government using its monopoly as leverage against its neighbors. The geopolitical implications become even more striking when coupled with the increasing number of cyberattacks and the Obama administration’s so-called “Asia pivot” in the Pacific. As REEs play a larger role on the world stage, it will be increasingly important to watch for their effects on the global and regional level.