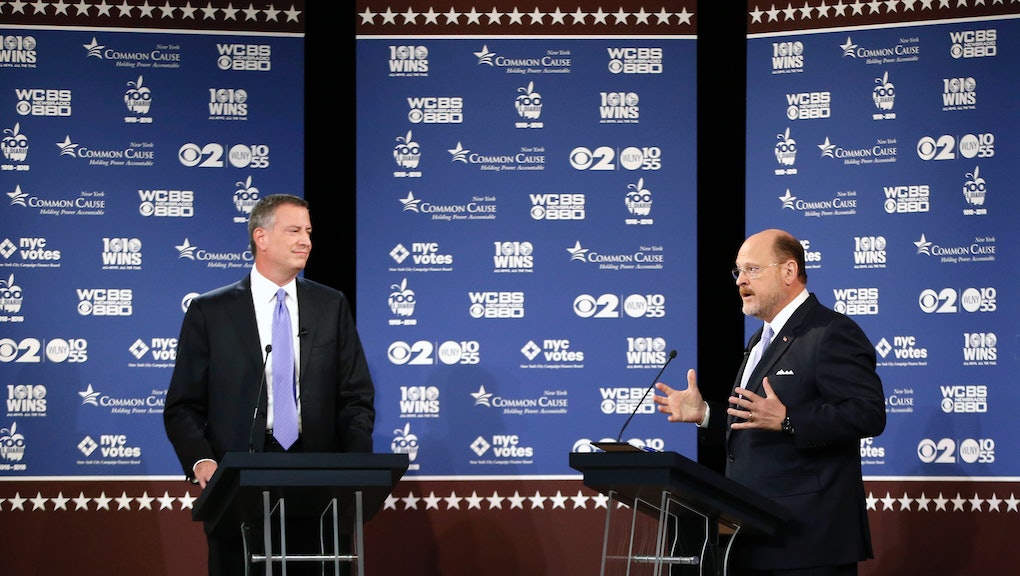 If New York City's just as a unequal and unjust four years from now, Republican mayoral candidate Joe Lhota warned us why we will have been duped.

"Don't fall into the trap that, you know, wonderful family — great mayor. And really think about it. Ed Koch — no family, great mayor. I mean, it doesn't make sense. He [Bill de Blasio] has a wonderful family. I think they're beautiful. I know they're beautiful. Great. But you know what? This is a campaign about the future of New York, not about your children. It is about everybody else's children," Lhota said in an interview earlier this week with Fox 5.

If the gist of this statement is that the Democratic mayoral candidate's endearing family shields a shallow and unqualified man, it may come too late.

New York City will know the identity of its next mayor in less than 10 days and a poll released Tuesday asserts it’s going to be the current public advocate by a mile. If there’s anything scientific to these numbers, de Blasio, Brooklyn boy and Park Slope poster child, will capture the mayoralty by a generous margin, leaving the former MTA chairman and Giuliani deputy mayor wondering if there’s way to redeem a lost year on the trail.

But just two months ago, de Blasio was another guy named William in a crowd thick with former council members and citywide officials. At best, he was a passionate and progressive yuppie. At worst, the average New Yorker couldn’t pick him out of a crowd of white guys. And then everything changed.

On August 8, the de Blasio campaign released a 30-second commercial of Dante de Blasio (and his lively afro) narrating b-roll footage about why his father would make an outstanding mayor, marking a seminal turning point in the campaign. Up until that time, de Blasio had been unable to separate himself from the pack and indeed, had been peripheral news in a campaign that had been dominated for two months by frenetic coverage of serial sexter Anthony Weiner.

Five days later, the first poll showing de Blasio separating himself from the pack emerged. At the month's end, he was holding steady. Three weeks later, he won 40% of the primary vote, (barely) escaping a run-off, and he has been trouncing Lhota since.

What do we make of this run? That it's not unfair to attribute at least a bit of de Blasio's campaign takeoff to the success of Dante's commercial, which has currently received close to 280,000 views. That the clip, to quote Chiara, his daughter, helped de Blasio overcome his "boring white guy status." That the video elicited emotion, excitement, possibility. We can analyze the advertisement ad nauseum and we're not going to, since it's already been done. But the effect? Essentially, between his meteoric rise in the primary polls, his telegenic family, and his current commanding lead over Lhota, de Blasio has become a superhero.

Thats right — Bill de Blasio, who reaches across the racial and socioeconomic divisions that scar this city; who shares none of the current mayor's aloof, technocratic, mechanical persona and is incapable of sensing the suffering of the city; who is a father of kids that we like; who will end Stop and Frisk; who will fund universal pre-K for all. Bill de Blasio, Superhero of New York.

This story of how Candidate de Blasio became Superhero de Blasio really isn't about Bill de Blasio at all. It's about how the media and their talking points take over every election and shape our views on candidates. After all, It's not like de Blasio's platform significantly changed throughout the race. The man did no about-face on issues and has stayed consistently progressive throughout. Somewhere along the lines, New Yorkers saw someone that they liked, related to, found interesting, and then found him to be capable of revolutionizing the city.

But the reality is,, no amount of driveby media impressions can actually tell us who we will get as mayor. It's close to impossible for us to actually wrap our heads around this.

In two weeks, a human will win the mayoral race of New York City. This human will carry the expectations of many who expect him to transcend systems, structures, and institutions that cling onto the status quo and fight for it to stay that way. He must figure out how to untie or slice through the Gordian knot that Bloomberg has wrapped the city in. He will have to learn how to balance the interests, needs, and desires of eight million individuals.

And actually, regardless of whether we chose him because we adored his family or admired his crisis management skills or found his governing style capable or his values vital, he will fail, or come short, or not measure up — not because we're blind, myopic, or ignorant, but because though we have thought we voted in a superhero, we've only elected a human.