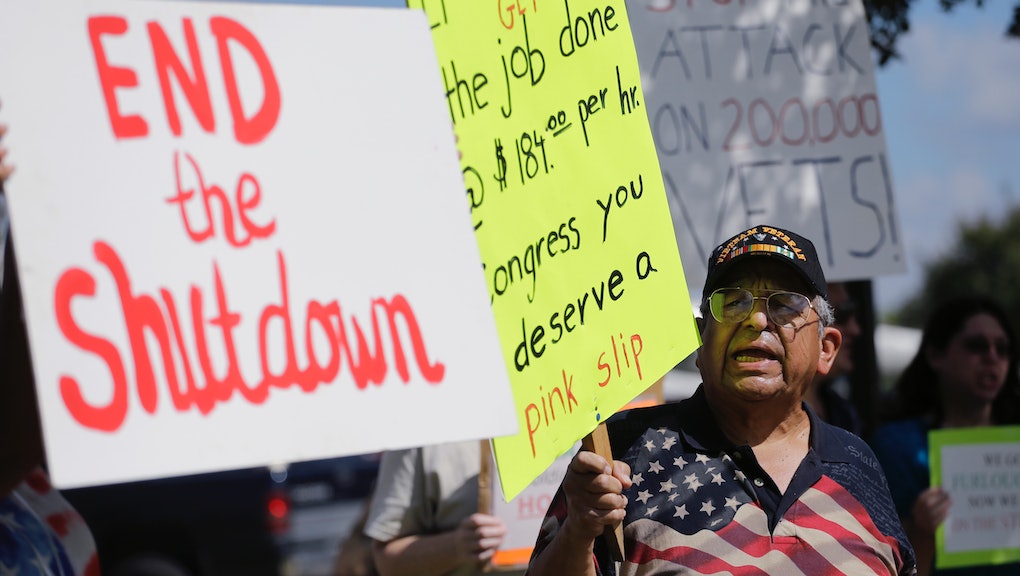 Why Thousands of Americans Want GOP Members Arrested For the Shutdown

The post-shutdown political backlash has been a nightmare for the Republican Party. Their approval ratings have hit record lows as Americans are fed up with temper tantrum politics. In the midst of a civil war between the intransigent ideologues who pushed for the shutdown and what is left of the pragmatic wing of the party, they are about to lose the governor's race in Virginia, the state that was most negatively affected by the government shutdown as many Northern Virginia residents are federal employees.

That backlash is justified and well deserved. Since taking the House after the 2010 midterm elections, the political gridlock they have delivered has resulted in what is perhaps the least competent, cooperative, and productive Congress in our nation's history. Congress went from a lawmaking institution to a crisis-making institution.

The 111th Congress Obama worked with when he first took office passed major legislation that addressed the job-hemorrhaging economy, our broken health care system, financial regulation, and many other problems. Their policy prescriptions may not have been perfect, but they did try to solve problems. That's what Congress was designed for, and that purpose seems to have been left behind. No major legislation came out of the 112th or 113th Congresses. Only 11th hour deals to avert manufactured crises and stop the bleeding from self-inflicted wounds. Whily our credit rating has not only been downgraded by one rating agency, it has been put on watch by others solely due to political brinkmanship.

And then, of course, there is the government shutdown that could have been avoided.

For some frustrated citizens, voting Republicans out is not enough. They claim arresting them is necessary for the harm they have done to our country by withholding a floor vote in the House on a clean Continuing Resolution, threatening default on our debt, and violating Section 4 of the 14th Amendment. A petition circulating on MoveOn.org calls for the Department of Justice to arrest House Republican leadership for the crime of seditious conspiracy against the United States. Over 54,000 people have signed the petition so far.

Many of these people are on the left's fringe, and are probably the same people who demanded members of the Bush Administration be prosecuted for the Iraq War. Needless to say, these sedition charges are going nowhere.

Dysfunctional partisanship is not a crime, but their frustration is shared by many.