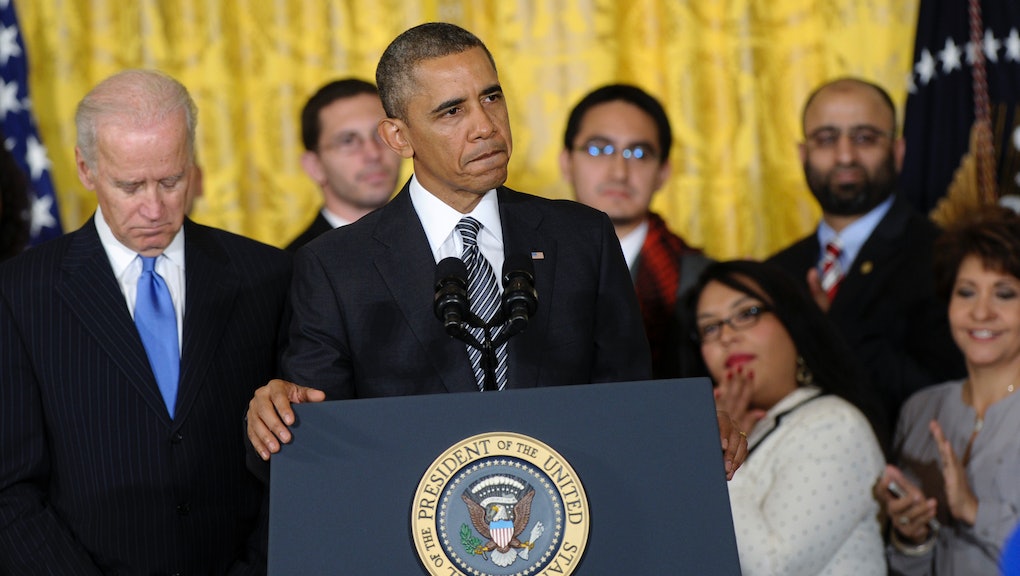 Immigration Reform 2013: Obama Speech Brings Issue Back From the Dead

Just before 11:00 am Thursday, President Obama took to the podium at the White House to talk about what’s on everyone’s mind: immigration reform. Wait, I thought we were still on the Obamacare and its website that would have been considered out-of-date in 1995? Did they already fix that?

Well, no — and if you watch any of today’s congressional hearings, it doesn’t seem like healthcare.gov’s designers and Congress are getting any closer to doing anything but playing an aggressively circular version of the blame game, but it’s no big deal.

Flanked by an eclectic mix of onlookers, Obama started his speech with the importance and need for real immigration reform in the country. Recognizing the American people aren’t particularly impressed with Washington politicians these days, the president quickly delved into the positives of immigration reform: good for national security, good for the American people, and good for the economy.

Sure, those first two things sound all well and good, but everyone knows it’s all about the Benjamins, so that’s where Obama really dug in. Eleven million illegals have no incentives to come out of the shadow economy and contribute to the system? Lame. Independent economists predict not passing a reform bill could miss out on a $1.4 trillion growth and nearly $1 trillion deficit reduction? Weak sauce.

A bill (S. 744) already passed by a wide, bi-partisan majority in the Senate calls for sweeping immigration reform that will strengthen the borders, attract entrepreneurs from outside the country, hold businesses accountable for working in the shadow economy with illegal immigrants, and provide a real path to citizenship through things like background checks, tax payments, English tests, and penalty payments, among others. So far, so good.

But Obama’s a smart guy and he knows how politics work. “If Obama’s for it, I’m against it,” the president predicted many Washington politicians might say. But pointing to the fact that his predecessor George W. Bush was for a similar bill and that he’s not running for re-election, Obama said, “I just believe this is the right thing to do,” adding that his opponents’ playing the politics game can be dangerous because in this case. “I believe good policy is good politics.”

Nearing the end of his generally benign, but ultimately uninteresting speech that was probably scheduled to divert some attention away from the congressional e-hearings, Obama set a rough timetable of “the end of this year” to pass a bill. “Let's do it now. Let's not delay. Let's get this done. And let's do it in a bipartisan way,” he said.

It all sounds very nice, but remember that time when the two parties couldn’t agree on something and shut down the government — yeah, that thing from like last week? So now that it's in the hands of Congress, what happens in there is anyone’s guess.