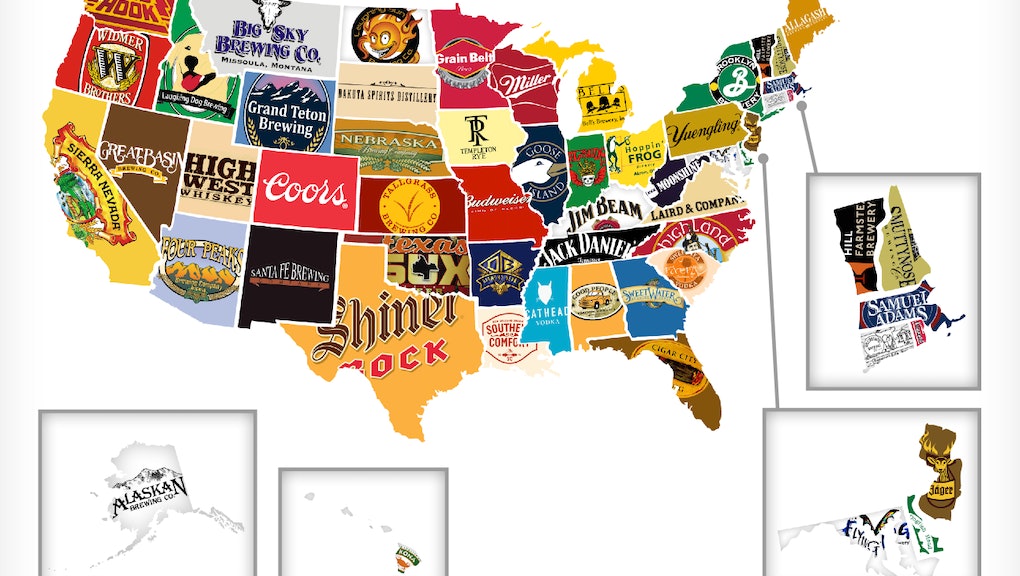 What's Your State's Most Beloved Booze? This Map Will Tell You

From Massachusetts, Boston's Samuel Adams Brewery to Louisiana's Southern Comfort, every one of the 50 members of the union has their own beloved drink — in other words, its favorite brew with which to get wrecked and regret. Above is a map from Thrillist highlighting their perception of each state's most iconic beer or hooch. Did they get your state right?

Some of the picks are spot-on, especially in the Northeast: it'd be pretty tough to argue against Yeungling for Pennsylvania (you could go with Iron City if you like vomiting) or Dogfish Head for Delaware, which is pretty much a shoe-in if you've ever had one of their 90-minute IPAs. Ditto for Rhode Island and Narragansett, a perfectly serviceable lager so generic it might as well come in a can labeled "BEER." And what self-respecting alcoholic wouldn't recognize a few Hawaiian Konas like Fire Rock or Longboard Lager?

But others are a little off. I lived in Florida for four-and-a-half years without seeing a single Cigar City beer. For better or for worse, Land Shark Lager has the market cornered on America's wang.

As for the liquor selections, they seem pretty random. Kentucky's Jim Beam and Tennessee's Jack Daniels are spot-on, and you could make a strong case for Utah's High West Whiskey (fun fact: it's made Mormon-style, back from when they knew how to have fun). But I don't think anyone outside of South Dakota would recognize Dakota Spirits Distillery.

Oklahoma's apparent flagship "Texas SUX" has some pretty dismal reviews, and I'm not sure why you'd want your flagship product to be a novelty beer with another state's name in the title. How about Marshall Brewing Company?

Word to the wise: Laird & Co. does make the U.S.'s last remaining apple jack brandy, but it's based out of New Jersey, not Virginia (though they use Shenandoah Valley apples and process them at their North Garden, Va. facility). Speaking of which, why is Jägermeister New Jersey's drink when it's made in Germany?

If you want a good drink out of Virginia or New Jersey, there's Blue Mountain Brewery and Jersey Artisan Distillery, which has the honor of being the only place that seems to be named after the state itself. But I guess Jersey is more known for consuming alcohol than making it.

Goose Island is Chicago, Illinois' best-known brewery for sure, but did you know they make Four Loko there?

Texas is listed here as Shiner Bock, which is mad tasty, but Lone Star beer clearly has the edge as the first mechanized brewery in Texas. And it's called Lone Star! Come on.

And Sierra Nevada for California, really? While I like a good sharp, hoppy American pale ale as much as the next red-blooded beer-drinker, give credit where it's due: California is the only place in the entire country that can make wine worth a damn. If California was a country, it'd be the fourth-biggest wine producer in the world. Who needs champagne when you have sparkling wine?

Finally, have some mercy on poor Colorado and Wisconsin. Coors and Miller are not a beer snob's friends, and if you're going full economy on your beer you might as well go for Milwaukee's original flagship beer, Pabst Blue Ribbon. They make it in California now, but I'll take it over a Miller High Life anyday.