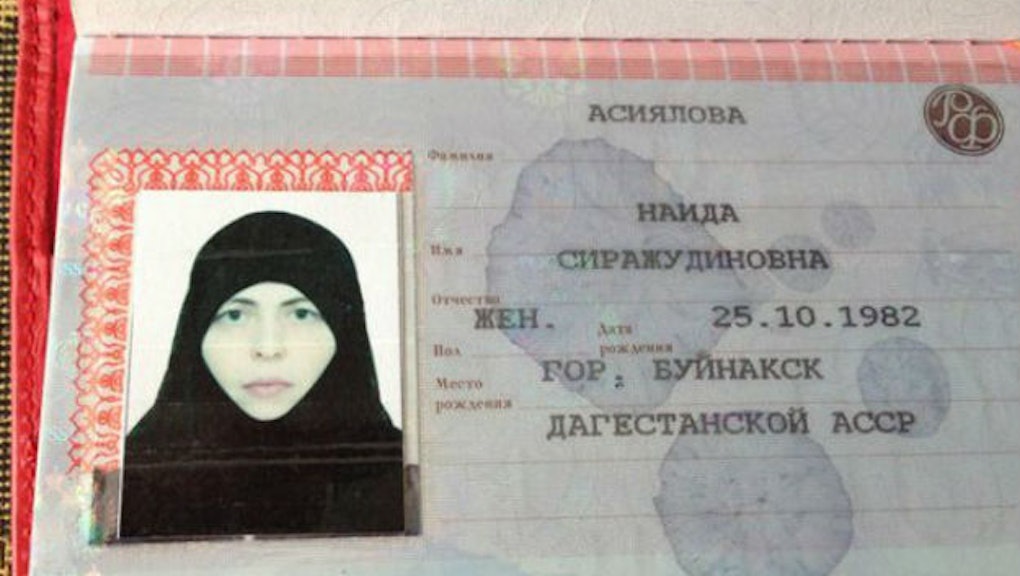 On Monday, Oct. 21, the southern city of Volgograd in Russia was hit by a bus explosion. The region Volgograd is in neighbors the restless North Caucasus republics of Russia, which are notorious for their Islamic extremism. Volgograd has its own history of terrorism, starting in 1996 when an explosion occurred in a carriage of a train arriving from Astrakhan. Since then, the vicinities of Volgograd have been attacked four times, including this latest terrorist act.

What distinguishes terrorist acts in Russia from those elsewhere, is that a great deal of them are perpetrated by the so-called "Black Widows", female suicide bombers. In Russia they are called shahidka, meaning a female martyr. So, who are these Black Widows and why have they become a curse for Russia's southern regions?

The Black Widows are a relatively new phenomenon for Russia; they first appeared at the turn of the millennium when the 17-year-old Khava Barayeva blew herself up in a truck filled with explosives at a military base in Chechnya. It's not a coincidence that female terrorism originated in this particular region at that very time. In June 1999, Russian military forces started the Second Chechen War against Caucasian militants. Losses among the militants were catastrophic; by the end of the campaign over two-thirds of them were killed. One of those who survived was infamous Shamil Basayev, a terrorist and the leader of the Chechen separatist movement.

In 2001 Shamil Basayev founded "Riyadus Saliheen," a brigade of suicide attackers. The formation of the brigade was exactly is the direct cause of the many tragedies in Russia today. Since the memory of the suppressed Caucasian insurgency and its losses was still strong, women were eager join the brigade and avenge their fathers, husbands and brothers.

In order to understand the role of women in the Caucasus, you need to understand the cultural of the region. The predominantly Muslim republics running along Russia's southern border between the Black Sea and the Caspian Sea have become extremely conservative in recent years; they are now more reminiscent of Saudi Arabia than Russia.

Although local governments, especially in Chechnya and Dagestan, are making attempts to present women as the new leaders of the society, the real state of affairs is completely different. The role of a woman in Caucasian society is tiny; only a small minority run businesses, because a woman running a shop in the Caucasus is a shame for her husband. It means that a man is unable to provide for his family. This leaves no other option for Caucasian women than to stay home and bring up children. Because bride kidnapping is widespread in the region, a young bride (often younger than 16) can find herself married to a man she doesn't know and in a family that treats her like a servant. Divorce is not an option for victims of bride kidnapping as accepting a girl back into her own family is a great shame for parents.

When a woman escapes from her husband, or from her own family, she has no other option than to join the militants who hide in the thick forests of the Caucasus. Women receive a warm reception from terrorists; they are treated as equals, "sisters in arms." Women who share food with guerrilla leaders (which is unheard of in the Caucasus) are often happy to put on a suicide vest and die for a cause they see as noble.

The Black Widow phenomenon is a nightmare for the Russian government, as it is closely tied to the traditions of the Caucas regions. Preventing women from becoming suicide bombers means intruding on the way of life of the 10 million residents of Russia's Caucasus, and this is hardly possible.

Some experts argue that Russia is going to see a surge in terrorist attacks by Black Widows, as the current leader of Chechen Islamists, Dokka Umarov, lifted the moratorium on attacking targets outside the Caucasus . He also promised to turn the upcoming Sochi Olympic Games into a nightmare. Let's hope he doesn't make good on his word.