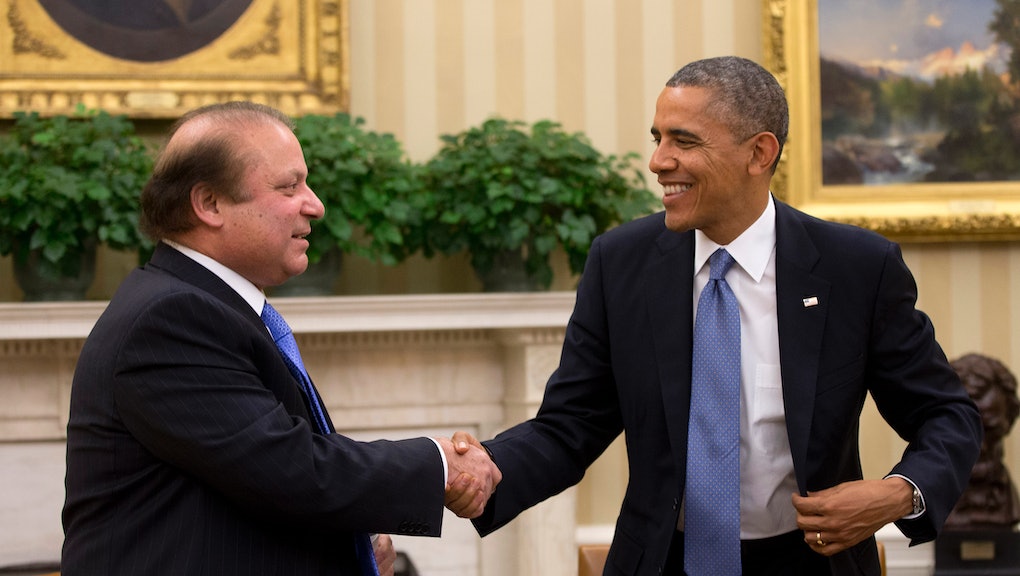 Wednesday's meeting between President Barack Obama and Pakistani Prime Minister Nawaz Sharif at the White House has attracted attention for its attempt to reset the tense relationship between the two countries. This was Sharif's first visit to Washington since Pakistan elected its new government in May. Diplomacy is more important now than ever between the two countries as the U.S. tries to ease its relations with Pakistan amid criticism for drone strikes and plans to withdraw coalition troops from Afghanistan in 2014.

The relationship between the U.S. and Pakistan has been defined by misunderstandings on the part of both Americans and Pakistanis, according to Pakistan's former Ambassador to Washington Husain Haqqani. Misunderstandings may still be abound, though, as the U.S. is in hot water over its drone strikes in Pakistan and Yemen. Amnesty International and Human Rights Watch allege that the U.S. has been involved in unlawful killings.

After the meeting, the White House released a 2,500-word joint statement about a need to respect "sovereignty and territorial integrity."

On Monday, the U.S. launched the Afghan Alliance, an initiative that was created in hopes of sustaining and expanding the role of civil society in policymaking. The initiative is "dedicated to preserving and protecting the progress made by the Afghan people since 2001" and boasts impressive leadership by former U.S. Ambassador to Afghanistan Ryan Crocker and former NATO Supreme Allied Commander Adm. James Stavridis.

Pakistan is also implicated in the region's power shake-up as a stakeholder in regional stability. The meeting between the two leaders on Wednesday focused on the region's security. Pakistan is arguably already the U.S.'s biggest ally in this situation, and in a meeting with American business leaders this Monday, Sharif stated, "Pakistan will do all it can to support the realization of peace and stability in Afghanistan, as we believe that a peaceful, stable and united Afghanistan is a pre-requisite for a peaceful and stable Pakistan."

The issue of U.S. drone attacks is still green, but Obama's response to the allegations will be critical to future relations with Pakistani leadership. The drone attacks are a pressing issue for Pakistanis. The newly elected Sharif pledged to end them, warning the Obama administration to halt the attacks on Pakistani soil.

Following the Wednesday meeting, the U.S. gave $1.5 billion in aid to Pakistan that had been held up from previous tensions to symbolize a new beginning. Forging a partnership between the two countries to ensure the successful withdrawal of U.S. troops in Afghanistan may be what it takes for increased understanding between American and Pakistani populations, but it won't be easy.