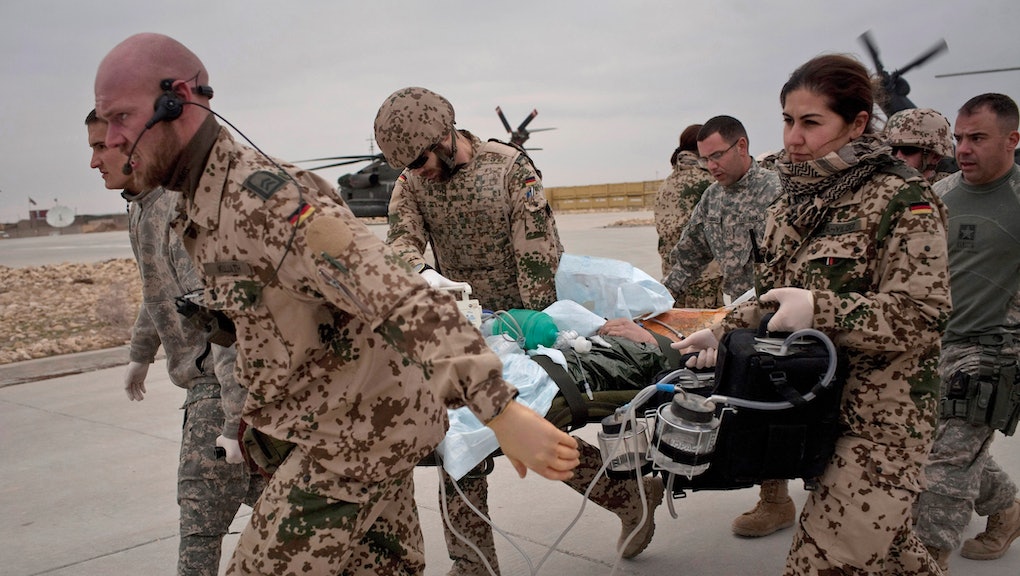 5 Drastic Ways the Sequester is Crippling Our Military

With the shutdown behind them, lawmakers have turned their attention to broader budget talks aimed at overcoming the differences that led the nation to the brink of default. For both parties, a key goal remains replacing the deeply unpopular sequester with more intelligent reforms of federal taxes and spending. While the odds of this happening are slim, something needs to be done to address the crippling impact the sequester is having on the military. Below are five examples of how the sequester is destroying America’s armed forces.

1. The Army and Marine Corps will Shrink Dramatically in Size

With the wars in Iraq and Afghanistan drawing to a close, the Army and Marine Corps were already slated to shrink from their wartime highs of 570,000 and 202,000 troops to 490,000 and 182,000 troops respectively. However, with personnel costs making up over one-quarter of the Defense Department's baseline budget, the Army and Marine Corps could be forced to shrink by an additional 100,000 and 30,000 troops by the end of the decade if the sequester remains in force. This would leave the U.S. with the smallest number of ground forces since WWII. And while many experts predict the U.S. won't engage in another ground war anytime soon, the same forecast was given after the end of the Cold War.

2. One of the Best Planes in History, the A-10, Will Disappear

The A-10 Warthog is slow, heavy, and almost completely defenseless against enemy fighter jets. But what it can do, close air support, it does better than any other platform in the Air Force's arsenal. Heavily armored and able to carry 16,000 pounds of ordnance, the A-10 uses its slow cruising speed of 300 knots to hunt down enemy armor and infantry with devastating effect. Not only does it excel at its job, but it's cheap too — the Warthog costs just $17,000 an hour to operate, the lowest operating cost of any Air Force jet. For comparison, the jet slated to replace it, the controversial F-35 (which won't even be operational until the end of the decade at best), costs $32,000 per hour to fly. Yet the sequester means the Air Force has little room for single-mission aircraft, which leaves the A-10 on the chopping block despite saving hundreds of American lives over the years.

3. There's No Money to Train the Troops

It's not enough to just have the appropriate number of troops and the platforms they need to fight; they have to be trained at a high enough level to be effective. Not surprisingly, the sequester has affected training as well. According to Army Chief of Staff Ray Odierno, the force has enough money to train only a fraction of its force, such that by Q1 of FY 2014, "78% of non-deploying, non-forward deployed brigade combat teams (BCTs)" will not be ready for "contingencies without significant preparation.” Likewise, the Air Force grounded many of its air squadrons from April to July of this year due to lack of funding for training, leaving 25% of its pilots uncertified for aerial combat, dropping bombs, and landing their aircraft. If the sequester remains in place, these types of capabilities gaps will continue.

4. Procurement Efforts will Slow Down

Thanks to the large amount of oversight it receives and the fact that it does a major strategic review every four years, the Pentagon maintains a fluid but well-structured schedule for its major weapons programs. The sequester is seriously disrupting this timetable. The branches will have to slow down purchases of everything ranging from F-18s, F-35s, and MH-60 helicopters, to Virginia-class attack subs, Ford-class aircraft carriers, and Abram tank simulators. As a result, the military will have to either forgo having enough equipment to get the job done or will have to keep using older platforms past their expiration date. Either way, it's not ideal.

5. Research and Development Spending Will Suffer

Last but not least, the sequester will lead to cuts of 15-20% in R&D spending over the next decade. According to Secretary of Defense Chuck Hagel, “The resulting marked slowdown in modernization would reduce our long-term, critically important and historic technological superiority and undermine our better buying power initiatives.” In other words, right as the world is experiencing another revolution in military technology, with drones, cyberwarfare, and advanced space technology entering the battlefield, the U.S. risks losing some of its lead over competitor states. Not only is the sequester sacrificing the current capabilities of the military in a shortsighted attempt to balance the budget, but it's sacrificing its future as well.