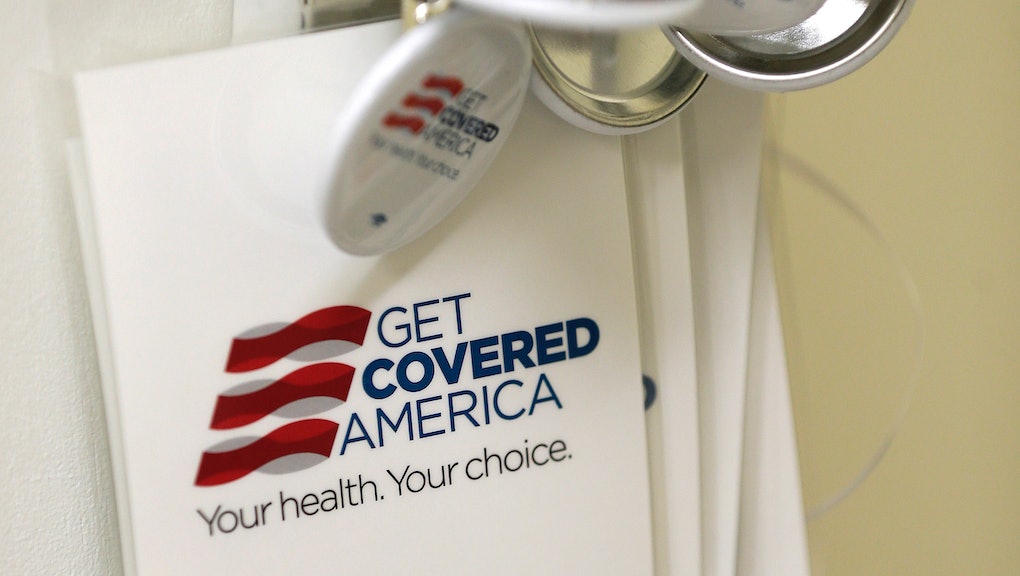 Five days before the launch of Healthcare.gov, President Obama touted the government-run online insurance store as “a website where you can compare and purchase affordable health insurance plans … the same way you shop for a TV on Amazon.” In reality, Healthcare.gov is much more like an online DMV than Amazon. Going from account creation to buying insurance means hours of website crashes, error messages, and repetitive data entry. Personally, my account is stuck in limbo — I can’t log in, but I can’t create a new account, and a conversation with the online chat helper was 10 minutes of me shouting “Hello? Hello?” into cyberspace. Maybe I will try again tomorrow.

Or maybe I won’t.

And that is the core problem. In order for the exchanges to work, young, healthy millennials (like me) need to sign up for insurance to defray the cost for older and sicker Americans. And the technical difficulties on the site are exacerbating serious policy failures within the health exchanges that make that goal all but impossible. It is these failures that will send the exchanges into a death spiral.

For starters, you have to enter a ridiculous amount of information before you can see potential insurance plans. This is by design. The administration did not want people to see the cost of health plans without government subsidies for fear that they would be subject to political attacks about the rising cost of insurance. That may have been good politics, but it was bad web design. It created unnecessary information bottlenecks where reams of information must be passed between consumers, insurers, and government offices. More transactions, more opportunities for error.

And it was bad business. Imagine the impact on car sales, if you needed a credit check before you could enter the dealership. Only those most in need of a new car would even bother. If only the most desperate buy insurance, the costs will spiral out of control. The administration now recognizes this mistake, and Healthcare.gov now provides a link to a web tool that allows you to compare prices, but the technological damage is already done — and there is no fixing how hard this makes it to sign up.

Because of all of this technical trouble, the Spanish language version of Healthcare.gov has been delayed indefinitely. Why is it so hard to translate the site into Spanish? Healthcare.gov is much more than the e-marketplace, the president described. Fifty-five different contractors built different parts of the site and the site draws data from untold state and federal databases. This octopus-like network of bureaucracies all have to speak and understand Spanish.

So delaying the Spanish site may make sense because of how complicated Healthcare.gov is, but it is terrible news for the potential success of the insurance markets. As I said before, signing up young and healthy people is the key to the success of the Affordable Care Act. The average Hispanic American is almost 10 years younger than the average American, and is twice as likely to be uninsured. The exchanges are “indefinitely” missing out on some of their most important consumers.

That mess of contractors and government databases is all channeled through the Center for Medicare and Medicaid Services, an organization whose primary function prior to running a $400 billion website was doling out cash for Medicare and Medicaid. Why the CMS would take on the task of running the exchanges instead of hiring a general contractor that might, you know, be able to run an insurance website remains unclear. But a probable reason is that, in addition to comparing insurance plans, the Healthcare.gov site is supposed to funnel those who are eligible into state Medicaid plans. The unintended consequence of this Medicaid expansion is a bureaucracy running a website that it has no technological expertise to run.

This also contributes to fewer people buying insurance on the exchanges. In Washington State, one of the relatively functional state exchanges, 35,000 people have managed to sign up through the website – but 30,000 of those will not be buying insurance, as they qualify for Medicaid. If you think that Medicaid makes you healthier (a debate for another time), then that is excellent for those consumers. But for the insurance exchanges to work people have to actually buy insurance — a rare phenomenon even on the functional exchanges.

These and other technical problems plaguing the rollout of the Affordable Care Act are really just bad policy decisions in disguise. And what now exists is a worst case scenario for advocates of the health law — people will fight through the problems to buy insurance if it is significantly cheaper than what is available elsewhere. For the young and the healthy, however, the hassle is not worth it.