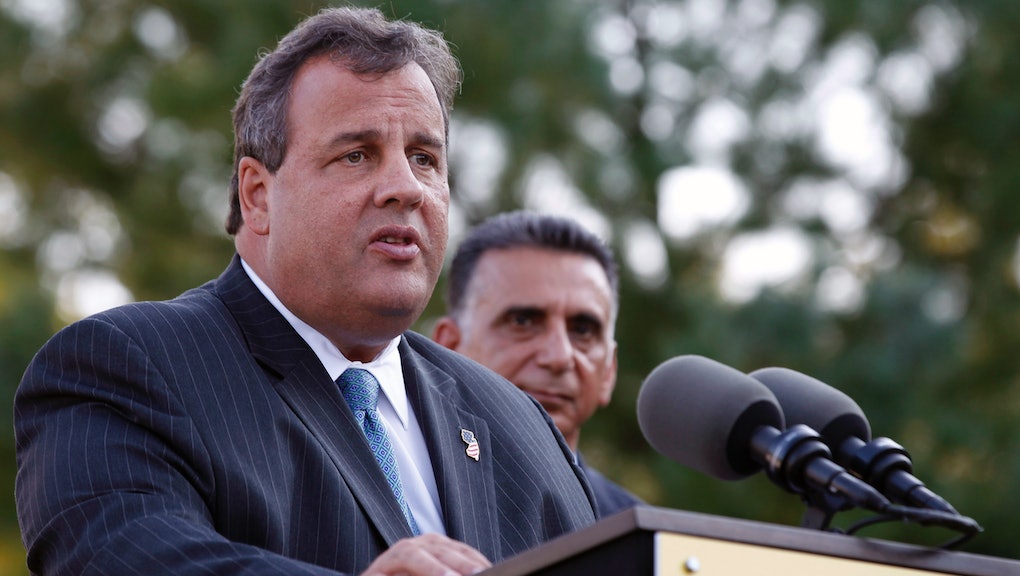 On Monday, New Jersey Gov. Chris Christie decided not to appeal the state Supreme Court’s decision to legalize gay marriage in the Garden State. Christie gave no stirring statement proclaiming his commitment to the ideals of equality. Instead, between the court’s decision— based on the June 2013 Supreme Court decision overturning the federal Defense of Marriage Act — and widespread public support, not to mention some high-profile Republicans who have yielded to the a-changing times, Christie gave in.

Christie, a talked-about candidate for the 2016 Republican presidential nomination, gets points for that decision, as do other members of his party who have stopped casting gay marriage as the great social clash of our time. Fourteen states now allow gay marriage. New Jersey is one of the most populous. Even among New Jersey Republicans, support for gay marriage is at nearly 50%. And though a little over half of all people nationwide support gays' right to get hitched, that number reaches 70% for those under 30. The youth just aren’t worried about it. Christie, ever the pragmatist, decided to give in in the face of that inevitability. And in spite of social conservative fear-mongering, that decision may not even come back to bite him in the ass in the next election.

With all the talk of Democrats leading the charge on gay marriage (and they often do, to their credit), and some Republicans timidly following, most people forget about libertarians. But back in 1972, the Libertarian Party’s very first platform voiced support for repealing all laws against consensual crimes, including “laws on voluntary sexual relations.”  As libertarian history professor Ralph Reico put it in a 1976 essay, “the Libertarian Party was born believing in gay rights.” A draft of the campaign platform for the 1976 presidential race had the party backing the “repeal of legislation prohibiting unions between members of the same sex, and the extension to such unions of all legal rights and privileges presently enjoyed by partners in heterosexual marriages.”

Now, some libertarians prefer that the government get out of the marriage business entirely, leaving love and who gets what to churches and contract laws. And indeed, some libertarians may be personally socially conservative and have some religious objection to gay unions. But no real libertarian can argue with the notion that if someone is getting the perks of marriage, there is no legitimate reason to deny that same privilege to two gay people.

The 2012 election was held a different country in terms of gay rights. Obama didn’t accept gay marriage until May. Two of the fringiest “Republicans” running were basically libertarians, and were much more accepting: former New Mexico Gov. Gary Johnson, the eventual Libertarian Party candidate, and former Rep. Ron Paul (R-Texas), whose influence in the libertarian youth movement cannot be overstated. Paul wanted to leave the issue to the states, but hinted at a voluntaryist spirit of “do what you want if it hurts nobody.” But Gary Johnson, who ended up with a million votes (great for an Libertarian Party candidate), came out explicitly for marriage equality while he was still trying in vain to get attention as a Republican. Nobody cared.

Meanwhile, President Obama was busy doing backflips on the issue. He had supported gay marriage in 1996 or maybe was just pandering really hard, then backpedaled as politicians do, saying he was for civil unions only, and then had a change of heart again in 2012. People were thrilled and grateful when the president said he had been “evolving” on the issue. It’s good that Obama became an ally, especially while he was a sitting president. And he eventually told his Department of Justice to stop enforcing the Defense of Marriage Act. He has made progress, but nobody should pretend he was throwing bricks at Stonewall. Like all elected officials, especially presidents, he carefully weighed how much political capital he had to spend before he admitted that yes, gay people should have equality.

Getting it right isn’t a a race, and you get props for getting there eventually — or even just giving in, as Christie has — but libertarianism provides the overriding principle that says it shouldn’t really be a vote, or a debate, it’s a right. And as goes gay marriage, so goes marijuana legalization, so goes the NSA backlash, and maybe the principle underlying all these will come across: The state has no business there. Libertarianism will be here when the polygamists and the heroin users start advocating for their rights, too. Not because libertarians necessarily support what they do (or don’t support it), but because nobody has the moral right to prohibit them from doing it. Some advocates for gay marriage (or pot legalization) swear their cause isn’t a slippery slope towards anarchism. Hopefully they are wrong. The more consensual activities are let alone, the more the country doesn’t fall into debauchery, the more people may learn to leave their fellow humans alone.