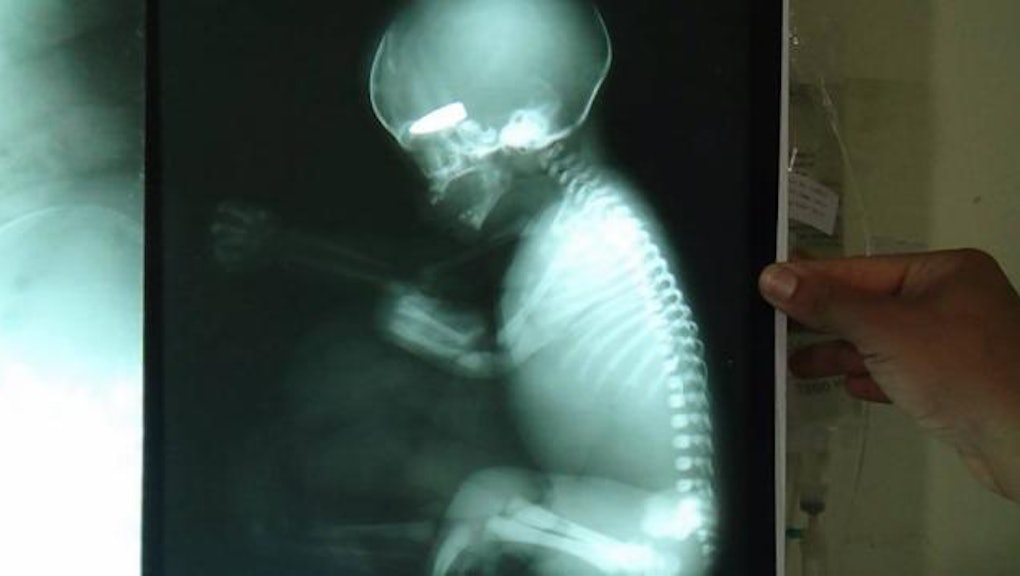 This Doctor Claims Syrian Snipers Are Aiming For Pregnant Women

The world has been obsessed with dismantling the Assad regime's chemical weapons, but the casualties by conventional means during this ongoing conflict have regrettably been bypassed in most media coverage. The most recent and horrific trend in conventional warfare has only brushed the media: the targeting of pregnant women by sniper-fire in conflict areas.

A photo of a baby with a round lodged in its skull while still in the womb has finally shed some light on this particular type of violence. There are two implications that we need to acknowledge. First, conventional warfare is as horrifying as any other form of warfare. Second, conventional warfare can target a certain gender, or those with distinct traits.

Before the image of the fetus emerged, the sniper story broke when a volunteer British surgeon, Dr. David Nott, told news sources, "Snipers were shooting women and children deliberately." In Nott's five weeks of volunteering, he encountered the trend. There were sometimes up to 15 or 16 women a day with targeted wounds. Ninety percent of wounds seen by Nott were from sniper-fire.

Based on Nott's medical accounts and discussion with civilians caught in the crossfire, a narrative of competitive violence emerged. Allegedly, snipers have turned hitting particular targets into a contest for prizes like cigarettes, according to CNN.

While no one denies the horrors of chemical weapons, it's difficult to downplay this form violence. Lost in the debate over whether or not to intervene in Syria was the question of why chemical weapons tripped the brink.

Political Scientist John Mearsheimer stated on PBS Newshour in August, "I ask you, what's the difference between killing somebody with shrapnel or bullets vs. killing them with chemical weapons?" He continues, "If we're so concerned about the fact that people have been killed, we should have intervened a long time ago in Syria." He raises a fair point.

Mearsheimer's also argues for the severity of gender-based violence. While chemical warfare is a spillover method of warfare that does not discriminate in target, the conscious targeting of pregnant women by snipers creates cultural and political conditions for Syrian society.

The targeting of pregnant women creates a kill list that not only affects the future population (already plummeting with casualties), but also the role of women in Syrian society. What do pregnant Syrian women have to do to survive?

The dismantling of chemical weapon stockpiles has already given the world symbolic satisfaction, as shown by the latest Nobel Peace Prize. The situation in Syria is far from over though, and won't be any less horrific without the use of chemical weapons. The conditions of conventional warfare still remain. Dismantling chemical weapons won't necessarily help Syrian women, and it certainly won't solve all of Syria's problem. It's time to reflect on what made the Syrian conflict a crisis to begin with.