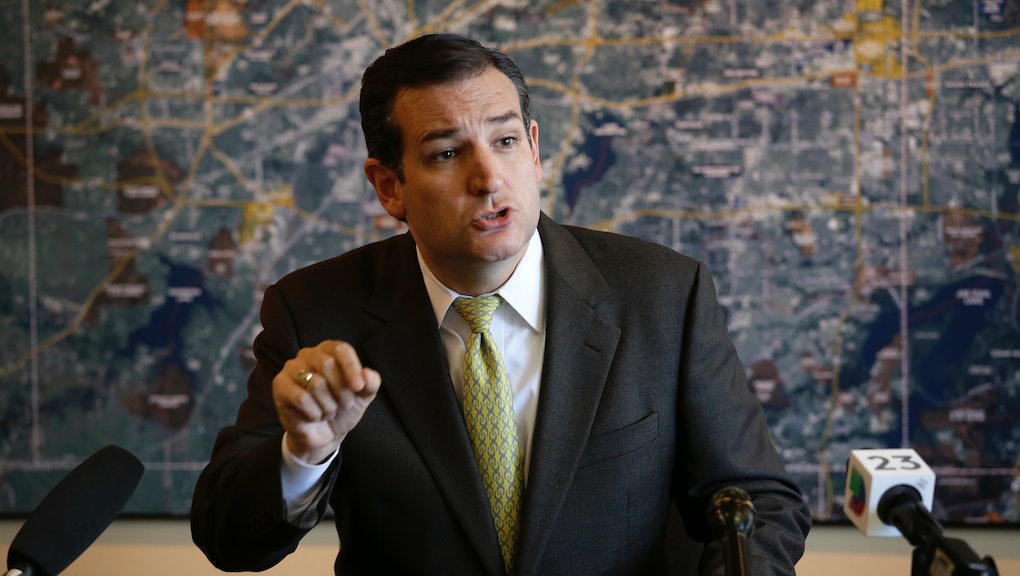 Sick and Tired Of Senator Ted Cruz? This Drinking Game is For You!

"The only shame is to have none." –Blaise Pascal

While the 17th century French mathematician may not have had Ted Cruz in mind when he penned the aforementioned aphorism, few words are more fitting for the Texas senator and his supporters. Having egged the radical right into a frenzy so fanatical that they shut down the government and drove America to the brink of financial catastrophe, Cruz is now slated to deliver the keynote address at the Iowa Republican Party's annual fall fundraiser Friday night. Since the Iowa caucuses play an essential role in determining both parties' presidential nominations, one could be forgiven for cynically assuming that White House ambition (and not a deep-rooted love of Hawkeye Staters) is the primary factor motivating the Tea Party darling's address tonight.

Of course, regardless of which speech you happen to be watching, Cruzian oratory is always a difficult watch for thoughtful people. For the particularly faint of heart or weak of stomach, such a feat may even be nigh unbearable. That is why PolicyMic has decided to publish this helpful drinking exercise. If you want to be a politically responsible citizen but don't possess the nervous fortitude (or masochistic streak) necessary to endure prolonged sober exposure to mindless platitudes and self-aggrandizement, then this is the game for you!

Per the usual rules, players are required to take a shot when...

Please note that this does not refer to a literal crucifix (although if ever a politician was to literally martyr himself, it would be Cruz). Rather it refers to Cruz's penchant for egregiously inflating the so-called risks and sacrifices he makes in the name of the Tea Party crusade. If his own self-description is to be believed, Cruz is a brave and valiant warrior for right-wing causes, one opposed not merely by the godless socialists on the left but the squishy appeasers on the Republican side of the aisle. While his more flagrant rhetorical excesses in this vein have been toned down a bit, Cruz still can't resist the occasional impulse to cast himself as Saint Ted, bravely accepting grave peril to maintain the faith despite the growing heresies of Washington.

MOST INFAMOUS EXAMPLE: When Cruz compared his ordeal in performing a 21-hour "filibuster" to the Bataan Death March.

Defined by Merriam-Webster's Dictionary as "language that describes something as better or worse than it really is" or "extravagant exaggeration," Cruz's hyperbole has become somewhat legendary these days. While lesser demagogues might be satisfied with sticking to the right-wing talking point about the evils of Obamacare or the socialist dystopian agenda secretly supported by any Democrat to the left of Grover Cleveland, Cruz isn't afraid to go the extra mile. Indeed, he has made a career embodying the "paranoid style" of American politics brilliantly described by two-time Pulitzer Prize winning historian Richard Hofstadter:

"The paranoid spokesman, sees the fate of conspiracy in apocalyptic terms — he traffics in the birth and death of whole worlds, whole political orders, whole systems of human values... he does not see social conflict as something to be mediated and compromised, in the manner of the working politician... Since the enemy is thought of as being totally evil and totally unappeasable, he must be totally eliminated — if not from the world, at least from the theatre of operations to which the paranoid directs his attention."

MOST INFAMOUS EXAMPLE: When Cruz compared those willing to work with Democrats on Obamacare to British Prime Minister (and notorious appeaser) Neville Chamberlain... and, by implication, conflating both Obama with Adolf Hitler and Democrats with Nazis.

3. Cruz tries his hand at talking like a "regular person."

Those in the know about Cruz are familiar with his elitist reputation, from his refusal at Harvard Law School to study with students who hadn't attended undergrad at Harvard, Yale, or Princeton to his obnoxiously obvious ladder-climbing while working for George W. Bush's 2000 presidential campaign. Perhaps as a way of offsetting this, Cruz has worked diligently to throw references into his speeches that he's just sure will help him relate to ordinary people. While this habit isn't in its own right unusual for an American politician, Cruz is distinguished by how forced and obvious his own attempts come off. Hence he doesn't simply denounce Congress (a popular pastime among both parties in Washington), but compares it to World Wrestling Entertainment. He doesn't just praise the American people, but juxtaposes the politics of 2013 with Star Wars, proclaiming that "just like in the Star Wars movies, the empire will strike back, but at the end of the day, I think the rebel alliance, I think the people will prevail.”

MOST INFAMOUS EXAMPLE: When Cruz read the Dr. Seuss poem "Green Eggs and Ham" during his filibuster, amusing pundits and baffling those who actually understood the poem's message.

4 & 5. Cruz describes his opponents as enemies of "freedom" and "liberty" and/or weaponizes the Founding Fathers.

While this may seem like a repetition of the earlier rule about using hyperbole, the "freedom/liberty" trope is a bird of a slightly different species. For one thing, it's one of the cheapest tricks in the political book. Since virtually everyone in American politics supports "freedom" and "liberty," positioning yourself as the avowed pro-freedom or pro-liberty pol (a) makes it sound like you're saying something when really you're saying nothing and (b) vilifies your opponents by oversimplifying their ideology instead of understanding (and through that understanding rebutting) their views. The repeated insistence that only conservatives follow the ideals of our Founding Fathers is a variation of this same strategy, but with the added component of being a classic bullying tactic. After all, because political legitimacy in America is tied to adherence to the philosophy of the Founding Fathers, there is no more effective way to discredit an opponent's argument than to claim the founding fathers would have been unanimously on your side. The fact that people who make such claims reveal themselves to be woefully uninformed about our nation's past (as I explained in one of my most popular editorials for this site), and thus discredit themselves as commentators on American history or politics, means very little. Rightists who use the "freedom/liberty" and "Founding Fathers" tropes don't do so to engage in constructive discourse, but to shut down debate altogether. The goal is not to enlighten, but to dominate.

MOST INFAMOUS EXAMPLE: Trust me, you'll know it when you see it.

And now you're ready to play the Ted Cruz Drinking Game! While it won't improve the intrinsic quality of Cruz's speeches, it will at least guarantee that you never have to listen to one while sober again!

DISCLAIMER: PolicyMic does not take responsibility for any alcoholic poisoning that may result from playing this game.