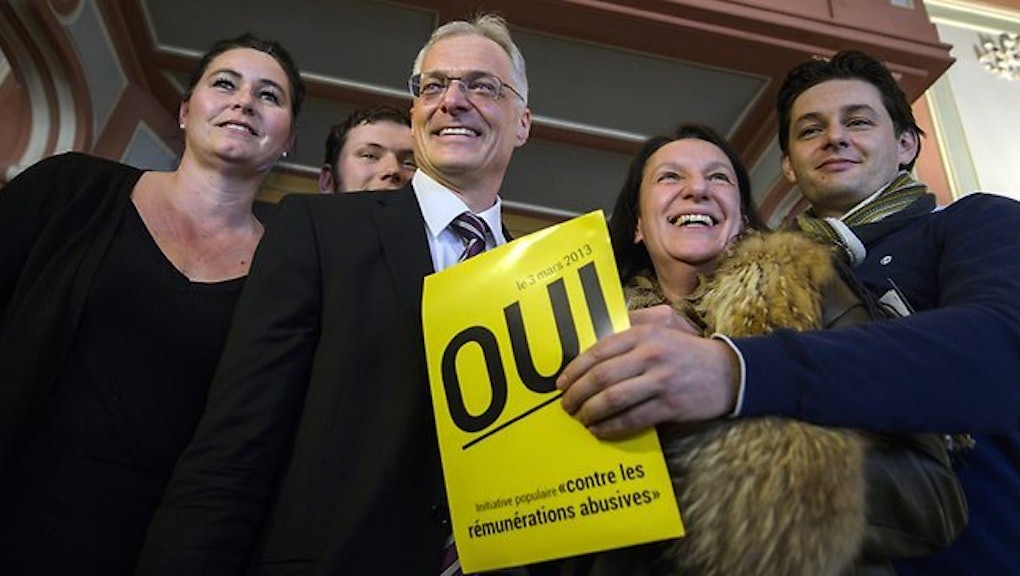 No country can call itself more business friendly than Switzerland. The small Alpine nation is perhaps best known for secretive banking regulations and low tax rates that make it an international haven for the financial industry. Nonetheless, it is none other than the Swiss who find themselves at the forefront of a movement to place limits on extravagant executive compensation.

In March, Swiss voters approved the Mindler Initiative, designed to curb lavish compensation by permitting shareholders to cast a binding vote on executive compensation every year. The law also outlawed signing bonuses and exit packages, known as golden parachutes and golden handshakes, that can result in top executives pocketing multimillion-dollar payoffs every time they change jobs.

Now, the Swiss are at it again. An upcoming referendum will present a new initiative to voters that would place new limits on executive pay. The "1:12 initiative for Fair Pay", as it is known, would limit executive salaries to 12 times those of a company's lowest-paid employee. Another initiative, would ensure that adults in Switzerland to receive an unconditional income of 2,500 Swiss francs (about $2,800) per month from the state. Both are driven by anger over growing income inequality in the country.

Supporters of the two initiatives gathered the 100,000 signatures necessary to call a referendum, which are a cornerstone of Switzerland's system of direct democracy and organized several times a year. To garner media attention for their initiative, supporters of 1:12 for Fair Pay, spearheaded by the youth wing of the Swiss Socialist Party, are launching guerrilla marketing campaigns in the country's financial hub Zurich, projecting images onto the building of banking giant UBS.

Voting for the 1:12 initiative will be held next month on November 24, with most voters casting their ballot by mail. A recent poll commissioned by public broadcaster SSR has left many political and business leaders fearful that the initiative, which had been widely dismissed, could create another "upset," with 44% support among the Swiss public.

Critics of limiting pay fear that these measures will tarnish the country's attractiveness as a location to do business and make it tougher for Swiss companies to attract top talent. They are hoping that support will taper off a voting begins soon, saying these sorts of referendum act as a release valve for public anger.

Across Europe, however, voters in many countries are demanding that steps be taken to curb the most egregious practices, hinting that these initiatives may be a sign of more than isolated Swiss anger. In the Netherlands, measures similar to the Mindler initiative are already in place and the UK, another European finance hub, has recently adopted a binding say-on-pay vote that gives investors more power to place limits on remuneration.