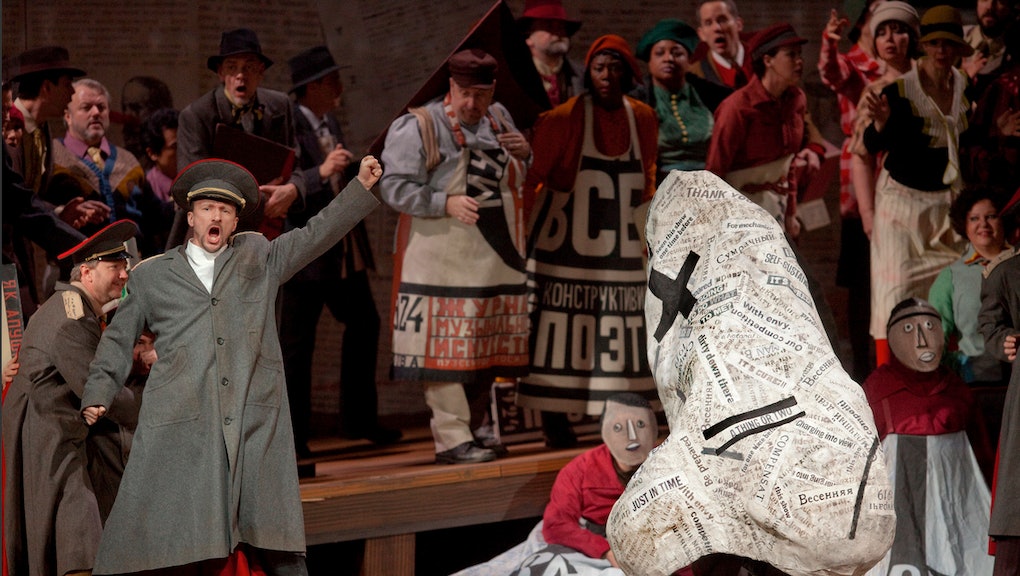 'The Nose' is a Hilarious Opera About, Well, A Nose

William Kentridge’s hilarious production of Dimitri Shostakovich’s opera The Nose returned to Lincoln Center this fall, after opening first in 2010. The opera finds the comedy of humanity and its institutions through a combination of slapstick and scintillating humor, and in the process counters the tragi-comic misconception that anything approaching the gravity of opera is too stuffy and elitist for younger generations. On the contrary, The Nose proves that opera can be one of the funniest, most dramatic, and highly engaging art forms there is. Kentridge’s production in particular evidences the art’s relevance to millennials, as its utilization of the ridiculous and absurd in everything from its set design to its score mirrors the satirical approach to life common to so many living in the “age of irony.”

Kentridge first became intrigued by The Nose after reading Nikolai Gogol's original short story, on which Shostakovich's opera is based. The plot involves a man, Kovalyov, who wakes to find that his nose has disappeared from his face and is gallivanting around town, enlarged to the size of a person and dressed as an officer above Kovalyov’s own social rank. The ensuing chase — man after his own nose — is slapstick comedy of Marx Brothers caliber.

As an artist, Kentridge is interested in exploring the absurd as a means of accessing truths about the world. Everything about his production — from the set, to the costumes, to the plot, and even to the score — illuminates the inherent comedy of a life in which ludicrous elements are accepted as natural facets of daily living (like a man is ashamed to approach his own nose because it is dressed in higher rank than himself for example). Kentridge suggests that the absurd should be understood “not as a peripheral mistake at the edge of society, but a central point of [its] construction.”

His dedication to the production of this opera derives from this "belief that the absurd, with its rupture of rationality...is in fact a productive way of understanding the world." As such, the two themes at work in The Nose — the terror of hierarchy, and a person divided — are each expressed through a sense of absurdity that uses the “universality of laughter rather than the particularity of tears” to express its truths. Laughter, Kentridge says, is a “better way of approaching…huge social shifts and changes” because we are united in the act of laughter, but isolated in the mode of distress.

In accordance with his notion of absurdity as the foundation of truth, Kentridge's set design is at once dramatic and nonsensical, paralleling the opera’s storyline. It borrows elements of angular architecture with a suggestion of German Expressionism, and plasters across its backdrop a collage of newspapers in both Russian and English. The light-hearted humor of the large, papier-mâché nose creeping around the stage is bolstered by farcical stop motion videos projected onto the background.

This sense of humor and absurdity is elemental even to Shostakovich’s difficult score, which is strident and almost completely inaccessible, rarely melodic, and dramatically comedic. Jeremy Denk, an accomplished pianist and recipient of the 2013 MacArthur genius award, has said that humor is an “under-appreciated and under-discussed element in much great classical music.” Denk underscores this point by pointing to the fathers of the classical style — Mozart, Beethoven and Haydn — all of whom have origins “built on the style of comic opera…the quick juxtaposition of seeming opposites.” That is the very definition of irony, and, in combination with The Nose's story and the design, it is precisely why young people drenched in the ironic life may find a second look at the operatic art form auspicious; the medium is perfectly suited to the levity of millennial pleasure-seekers. Kentridge has described his work as being about “the seriousness of play” and there is perhaps no better metaphor for the flippant humor that characterizes millennials. Everything is at once very serious and also a joke.