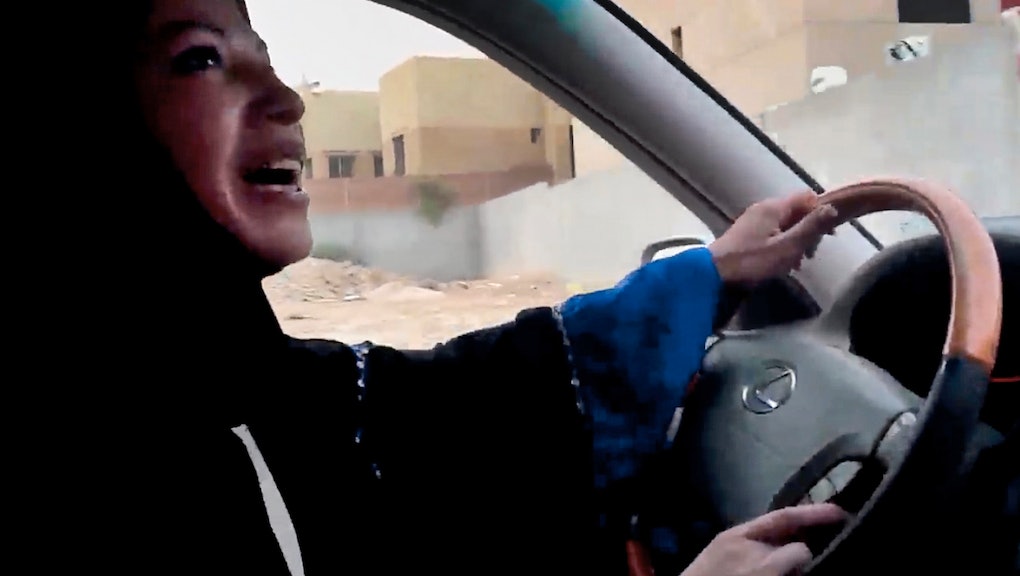 Saudi Arabian Women Driving: They're Not Just Fighting For Their Right to Drive

They may not be fighting for the right to vote, but on October 26 Saudi women activists took to the streets to demand a different right – the right for women to drive. Planned to be the third major protest in 23 years against the de facto ban on women driving in Saudi Arabia, the event was originally supposed to take place on one day but was changed to an ongoing driving campaign after the Interior Ministry threatened legal action against the activists.

Despite these setbacks, campaign organizers announced that more than 60 women claimed to have driven on October 26, making it the largest protest of its kind so far.  Even with many participants sharing videos and photos of themselves driving, claims are hard to verify, so the exact number of participants will remain unknown.

In a country where women are under the legal guardianship of men for their entire lives, (under which guardianship even young girls can be forced into marriage, among many other things), the ban on driving may initially seem insubstantial.

But these women are demonstrating for more than just the right to drive. Since all areas of Saudi Arabia except Mecca lack adequate public transportation, women must either be wealthy enough to afford a driver, or ask a male relative to drive them – in other words, they cannot go more than a mile or two without the approval of a male family member. As Eman al-Nafjan, a prominent Saudi blogger at the forefront of the campaign, explains, this dependence upon male relatives for basic mobility “is one of the main things that perpetuates the [Saudi] governmental patriarchy… This day-to-day obstacle has proven to be a demoralizing deterrent for many women from pursuing an education, a career and even maintaining their own healthcare.” In this sense, freedom to drive would influence Saudi women’s lives in many significant ways.

Echoing Nafjan’s concerns, Madeha al-Ajroush, who participated in the first driving protest in 1990 as well as the 2011 demonstration, explained, “I am doing this for all the women who can’t [afford a driver]. Who can’t go to school, who can’t go to university, who can’t even go to a grocery store without waiting for some man to take them.”. Despite losing her job at an NGO because of her involvement the 2011 protest, Ajroush not only participated in the demonstration this Saturday, but was even driving prior to it.

Despite the challenges they have faced, many Saudi women activists seem cautiously optimistic. Fawzia al-Bakr, who participated in the original demonstration in 1990, said that the country has been edging towards lifting the ban, because society’s views on the issue are shifting and because social media has allowed organizers to spread their message to a wider audience.

Ajroush, a veteran protester as well, acknowledges that it has been a long, tough battle, but also believes they have made real progress. She observes, “Fighting for women’s rights has never been easy, whether it is in the Middle East or elsewhere in the world… There is something different in the air now. Perhaps this time, the ban will finally be lifted.”