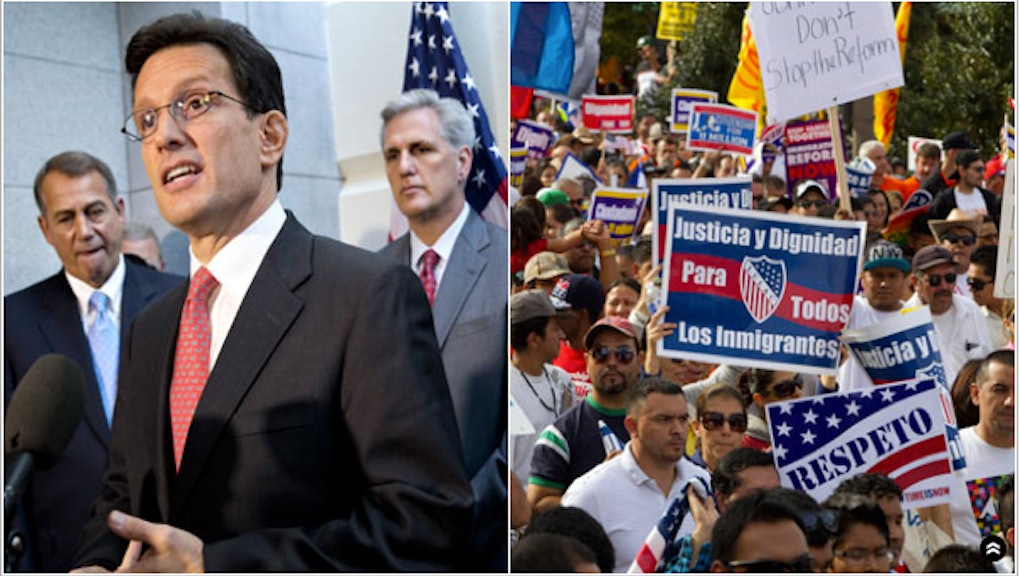 Immigration Reform 2013: Why the House GOP Refuses to Vote On It

The Senate immigration bill could be brought to a floor vote in the House right now and it would likely pass with universal support from Democrats and more than enough Republicans to form a majority (much like how the bill that raised the debt ceiling and re-opened the government was passed). Then, if no language is changed from the Senate bill, it could go straight to President Obama's desk and it would be law.

It won't happen that way for a couple reasons. One, the House wants its own version of a bill, be it piecemeal or comprehensive, because after all, the House are its own duly elected legislative body and not a rubber stamp for the Senate. That's understandable. The other reason is the Hastert Rule, which means Boehner wants not only a majority of the House, but a majority of his caucus to vote for the bill in order to maintain credibility as speaker. Essentially, Boehner is operating as if he's the speaker of the Republican Caucus instead of speaker of the House of Representatives — a mindset that prolonged the unnecessary government shutdown. Ridiculous as that may seem, the real question is, why don't the majority of congressional Republicans support comprehensive immigration reform when the majority of the power players in their party and the majority of the American people do?

The establishment is for immigration reform. The Tea Party wing for the most part is not. The majority of those in the third group probably are, but are afraid of losing their seats via a Tea Party primary challenge. That is why immigration reform in the House will likely not happen until next summer after most of the congressional primaries, once many in the third group have secured their nominations and are set to coast to reelection. It's also worth noting that while the Senate immigration bill was passed with bipartisan support, only one in three Republican senators actually voted for it, which makes trying to get a majority of the majority in the House seem only more far-fetched.

Though contrary to the general consensus that House Republicans would invite primary challengers if they vote for immigration reform and are seen as compromising with Obama, there is quite a bit of evidence that Republican primary voters actually support immigration reform. While they oppose blanket amnesty, the majority of Republican primary voters polled support a pathway to citizenship that comes with conditions attached and increased border security — which is exactly what the Senate immigration bill is.