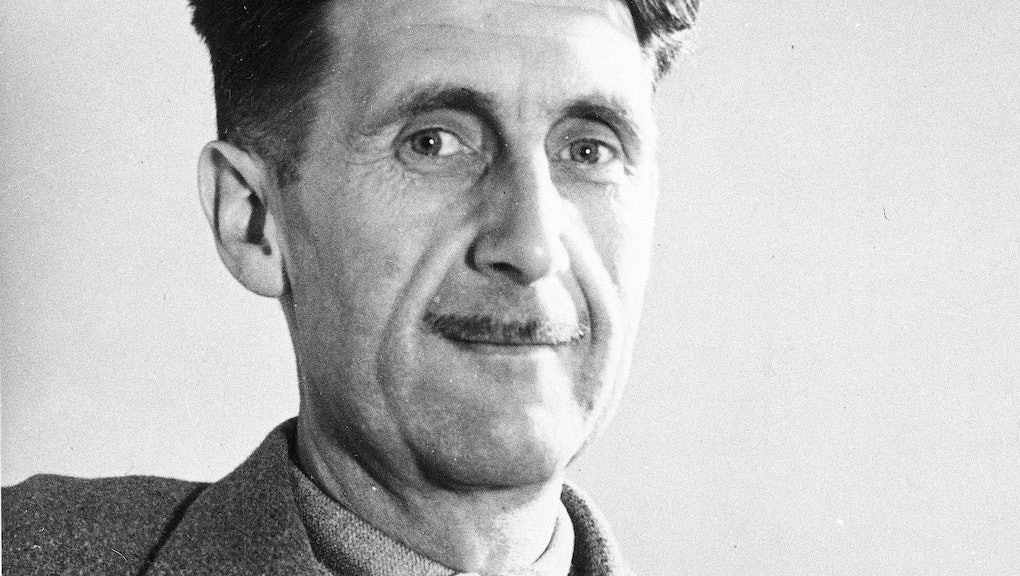 Dystopian narratives have a particularly prominent place in the Young Adult canon. It's unsurprising that narratives featuring individuals struggling against a system would appeal to young adults navigating between the pressures of conformity and their emerging individuality. In this, I was no exception. Throughout my childhood and early adolescence, my penchant for dystopian fiction drew me towards curriculum staples such as Lois Lowry's The Giver and John Wyndham's The Chrysalids. It wasn't until high school, however, that I encountered the full spectrum of dystopian fiction.

George Orwell wrote 1984 in the years following World War Two, inspired by the 1943 Tehran conference, which Orwell saw as an attempt by Stalin, Roosevelt, and Churchill to divide post-war world between themselves. In the book, three fictitious super states exist in a kind of cold war (a term that Orwell coined in an earlier essay). While the population is relentlessly monitored for any signs of criminal dissidence, the protagonist, Winston Smith, attempts and fails at an intellectual and emotional rebellion against the Party and its leader, Big Brother. Orwell's most famous work is now so closely associated with our understanding of our own surveillance societies that its role as a work of literature is sometimes overlooked, but at the time I encountered it in high school, the book marked a major turning point in my own appreciation of the function of fiction. I had read Orwell before (the result of which had been a confused book report on Animal Farm for my fifth grade class). But, unlike Animal Farm, which went more or less completely over my head, I read 1984 at the right time. Since my adolescence, I've come to better understand the role Orwell's masterpiece has played in shaping our perception of contemporary society, but at the time it was the human element of the story that was most powerful: the pathos of Winston Smith and his fellow citizens that is evoked when Smith's interrogator tells him "If you want a picture of the future, imagine a boot stamping on a human face — forever."

The idea that the human spirit may not always prevail, that there are forces stronger than human personality, was a reverberating wake-up call for someone who, like many millennial teenagers, had been raised to believe in boundless possibility. Neither Winston Smith, nor Julia O'Brien (his lover), nor any of the other characters with which they come into contact are caricatures of political ideologies. They're individuals, and it's as individuals that they suffer. For me, bearing witness to such believable distress gave license to my own teenage angst. In a way that was paradoxically liberating, it validated an occasionally gloomy outlook by showing me there was reason to worry about the future: that hardship was real, and that things don't always work out. Most importantly, it showed me what can be done with that angst, as it's impossible to read 1984 without getting a sense of Orwell's own struggles. As he states in the essay 'Why I Write': "Writing a book is a horrible, exhausting struggle, like a long bout of some painful illness. One would never undertake such a thing if one were not driven by some demon whom one can neither resist or [sic] understand."

As I've gotten older, my appreciation of 1984 has changed. Orwell's elegant prose — a reflection of his own aphorism, "good prose is like a window pane" — may no longer stand up to such lyric dystopias as Kazuo Ishiguro's Never Let Me Go, but the book contains nuances that merit closer examination. This is particularly true of the appendix to the novel, which suggests that, far from being inevitable, the world of Big Brother and the Party is fundamentally unstable. While there's no salvation for Winston Smith, the appendix indicates that 'Newspeak' — the reductive shorthand that the Party attempts to impose as language — fails, along with the entire Party structure because the ideas expressed in art, literature, and everyday human interaction defy simplistic expression. Although it's doubtful that Orwell could have foreseen the exact ways in which his masterpiece has remained relevant, it's nonetheless true that literature, which works like 1984 have helped myself and others appreciate, is still part of what makes us human.

This story is part of an ongoing series on the "books that changed our lives." Read more from pundits here, and e-mail elena@policymic.com if you are interested in contributing.