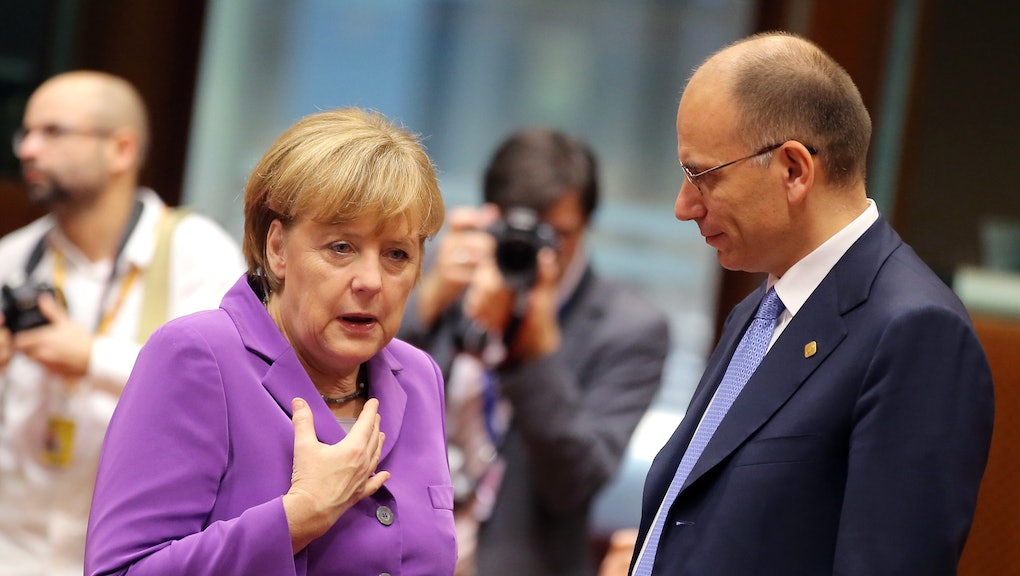 Angela Merkel Wiretap: How NSA Spying is Hurting the Fight Against Terrorism

These days, it seems that just about everyone is mad at America over its worldwide spy net. And amid new reports that the National Security Agency has been spying on German Chancellor Angela Merkel's cell phone since 2002, it seems like the world at large has goodreason to be resentful — as do our allies. Not only has that lead to a severe "lack of trust" towards the U.S., it now risks undermining the U.S.' foreign policy and threatens to do major, and perhaps irreparable damage to America's transatlantic relationships.

A prime example of that is Secretary of State John Kerry's trip to Europe, where he had went to talk about Syria, Iran, and Mideast peace, but instead, spent his time being confronted by the understandable outrage over U.S. spying and quelling the furor of his European counterparts.

And although spying amongst allies isn't exactly new, according to former French Foreign Minister Bernard Kouchner, it is the "the magnitude of the eavesdropping" which is shocking and impassable. And Kouchner isn't off the mark. Spying amongst nations is fairly normal. However, this type of high-level intrusive and invasive spying is most definitely not. In fact, it is reminiscent of Watergate and McCarthyism and makes the U.S. look weak and paranoid.

Moreover, this type of weakness threatens the U.S.' foreign policy and the weight of its words and decisions within the global community, as well as its relationships with its allies — especially its transatlantic relations. According to former secretary of state, Madeleine Albright, a lot of the news that has come out regarding the U.S.' practice of espionage is "specifically damaging" because it has the power to "negotiate positions."

A clear indication of this already happening is in the upper hand that the Europeans already feel like they have gained from this news coming out. According to a former French counterintelligence officer, and now director of Brussels-based European Strategic Intelligence and Security Center, the controversy came at a good time for Europe, as they now have "… a lever, a means of pressure ... in these [upcoming] negotiations."

Perhaps most devastating to the U.S.' current interests, the revelations could potentially threaten the U.S' fight to end terrorism. By carrying out espionage against some of the very countries that have supported the U.S.' efforts in the past, the U.S has undermined its allies' leadership and created an atmosphere of severe distrust. It is now unlikely that American allies will continue to put their militaries at risk when they neither like nor trust the U.S.

Thus, if the U.S. wishes to keep its high-footing in the international community and preserve its national interests in terms of foreign policy, the U.S. will certainly have to rebuild trust with its allies. And perhaps a start to that would be to agree to Germany and France's new rules that would likely curtail American eavesdropping on foreign leaders, companies, and innocents abroad.