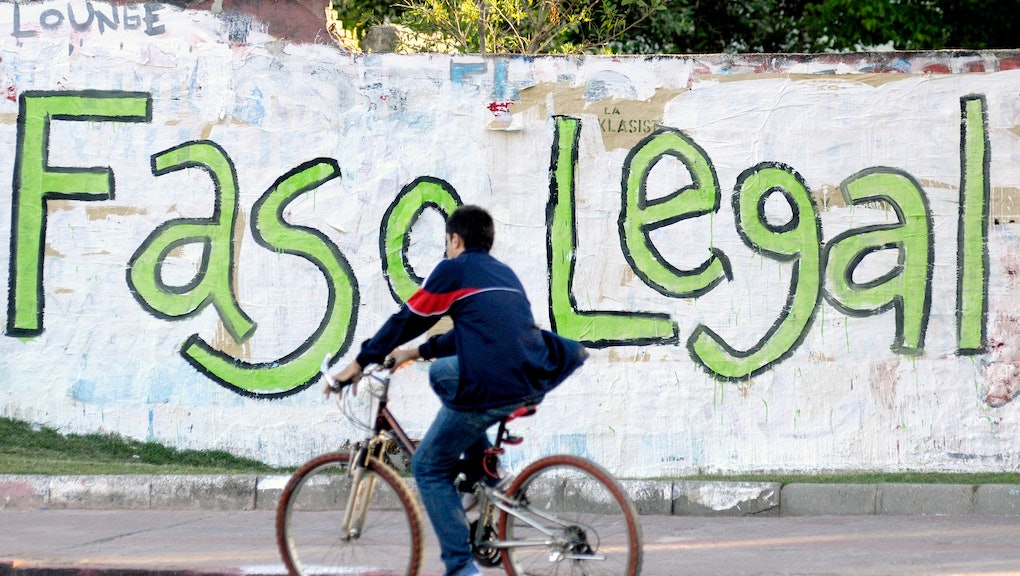 Marijuana Legalization Should Be a Success in Uruguay, But It Wouldn't Work Everywhere

Speaking before the UN General Assembly last month, Uruguayan President José Mujica invoked the Global South to pursue an alternative to a global order dominated by cutthroat capitalism, colonial powers, and environmental degradation. It was not the first time the president has bucked international norms: his coalition is poised to defy UN drug conventions by legalizing recreational marijuana. The move will likely embolden other leaders, especially in Latin America, to question current drug policies. But should – and could – the region follow Uruguay’s lead?

When it comes to drugs, public institutions matter a great deal. Quality healthcare facilitates addiction treatment. Vigilant policing keeps violence relatively low, even along trafficking routes. (Honduras’ homicide rate is over 10 times that of neighboring Nicaragua, in large measure due to Honduras' inferior law enforcement). Consequently, harm reduction becomes exceedingly difficult in places with low-performing bureaucracies, lack of funds, or weak police forces. A policy that is effective in one country may be a colossal failure in another due to differences in institutional capacity. So while the region should pay close attention to what transpires in Uruguay, other Latin American nations should take pause before rushing to replicate the initiative.

The legal framework under consideration in Uruguay is an ambitious undertaking from both a bureaucratic and law enforcement standpoint. The proposed legislation calls for the government to create a new regulatory agency tasked with licensing marijuana producers and managing a federal registry of users. The bill would also require authorities to prevent foreigners and minors from purchasing pot, and guarantee that Uruguayan product – intended to be both cheaper and higher quality than the black market alternative – does not travel into neighboring countries. The law applies strict penalties, including jail time, when these rules are broken.

Uruguay is an ideal laboratory for this experiment, though the country is hardly representative of the region. Corruption in Uruguay is comparable to that in the United States, and is one of the hemisphere's safest and most development nations. With 3 million inhabitants, it is the smallest Latin American country by population and is home to a scant 25,000 habitual marijuana users. These factors set Uruguay apart from its neighbors, which generally suffer from higher levels of corruption, poverty, and insecurity, and must govern much larger populations. These elements make a complex proposal like legalization more difficult to implement.

No doubt, Latin America's institutional weaknesses are partially due to the corrupting influences of the drug trade. But in order for legalization to have a lasting impact on organized crime, law enforcement must ensure that criminals do not offset lost profits by turning to other sources of revenue, or to the black markets that result from regulations (in Uruguay’s case, sales to minors, tourists, and neighboring countries). Legal drugs are not a substitute for effective police and judicial systems, both of which are still sorely needed throughout the hemisphere.

Uruguay’s initiative is also notable in that consumers will only be able to buy marijuana from the government or produce it themselves. The advantage of this system is that it keeps the drug from becoming commercialized, and thus avoids private marketing that could increase use. But, obviously, a state monopoly excludes private companies from profits, so the government must resist industry pressure to privatize. Security expert Alejandro Hope notes that in his native Mexico, pharmaceutical companies have effectively manipulated prescription laws to increase the legal sales of their medications. The Mexican government’s “limited capacity to impose and implement regulations in the public interest,” he concludes, “should inform the debate over the future of marijuana.” Uruguay has a strong tradition as a social democracy – experts laud the country as the region’s “poster child” of redistributive policies – and is likely in a better position than its peers to resist corporate influence.

Drug policy is in serious need of reevaluation, and we should encourage the Western Hemisphere’s leaders to evaluate all available options, including legalization. Chile, which also ranks relatively well in governance indicators, is likely to consider following Uruguay’s example. Policymakers in other territories may choose to follow suite as well, despite the challenges. But whatever the ultimate strategy, alternatives to the status quo must be based on a realistic appraisal of a country’s institutional capabilities.