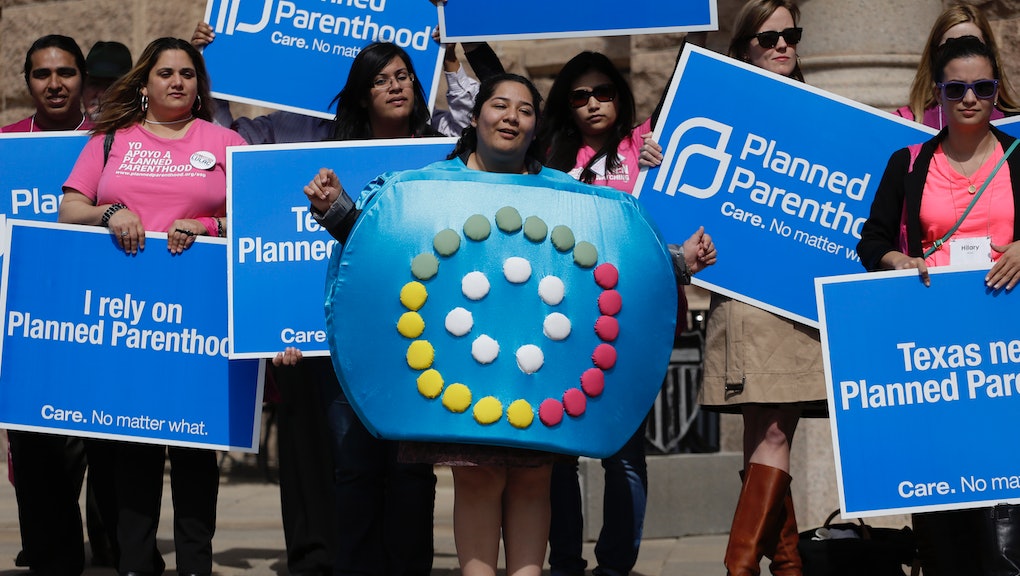 If Congress Keeps Messing With Our Birth Control, We'll Make Sure They Lose

Members of Congress who are launching attacks on birth control will regret it come election time. American families benefit from copay-free birth control and will vote against those who try to take it away.

A recent CDC study found that virtually all sexually active women will use birth control at some point in their lives. Even Catholic women whose religious leaders advise against it are using birth control at a rate of 98%. Planning pregnancy correlates with the unprecedented number of women attending college and graduate school. Forty percent of women are now the primary breadwinner in their families. Family planning is a crucial tool to provide for education opportunities and secure economic stability. Attempting to weaken or end copay-free birth control provided by Obamacare will cost the Republican party women’s votes.

This will be a big problem for them. Women are not only majority of the population but they have outvoted men since 1964. In 2012, female voters were a decisive factor in Democrats retaining their Senate majority. In seven key races where exit polls were conducted, men favored the losing Republican candidate, and a majority women voted for the winning Democrat candidate. Democrats like Tammy Baldwin in Wisconsin and Elizabeth Warren in Massachusetts were elected to office because they were strongly favored by female voters.

Female voters are key to winning elections not only because they are more likely to vote, but also because they are more likely to be undecided until late in an election. Late deciding voters have enormous potential to change the direction of an election and many campaigns spend enormous amounts of money courting them. Women are also giving more in elections than they did 20 years ago, and are overwhelmingly giving to Democratic party candidates for Congress.

While women are not a monolithic voting bloc, three out of five women nationwide believe that health insurance companies should be required to pay the full cost of insuring birth control. Republicans may think they are courting the Christian votes with their attempts to undermine Obamacare, but 67% of Catholic and 57% of Evangelicals support full coverage. Fifty-seven percent of women who identify as independent — a population that is more likely to vote and more likely to be last minute deciders — side with Democrats on fully covered, copayless birth control. Even 72% of Republican women believe that birth control should be included as preventive health care, covered without any out-of-pocket costs.

Affordable birth control is a basic middle class pocketbook issue. Nearly half of women between the ages of 18-34 with incomes less than $75,000 have delayed or limited childbearing due to experiencing economic hardship. While many people assume contraception is inexpensive, affordability is the primary barrier to contraceptive access. Even though three out of four women of childbearing age have private insurance, prior to the Obamacare birth control provision, many still paid as much as 50% of the cost of birth control out of pocket. One in three female voters, including 55% of young women, have struggled to afford it. More than half of young women say they have used their birth control method inconsistently because of the costs. The average woman between 18 and 34 is earning $27,458, but the average low cost birth control method runs at $1,210 per year.

Women spend an average of 30 years trying to prevent pregnancy, and prior to Obamacare, if a woman stayed on the pill that whole time, she would spend an average of $36,300 without insurance and as much as $18,150 with insurance. The Institute of Medicine specifically cited the high cost of birth control when it recommended that it be covered without copays as part of Obamacare’s provision for copay-free preventative medicine.

American women need access to low cost birth control. If the economic security of American families isn’t enough to get members of Congress to support copay-free birth control, then the possibility of losing their jobs should be.