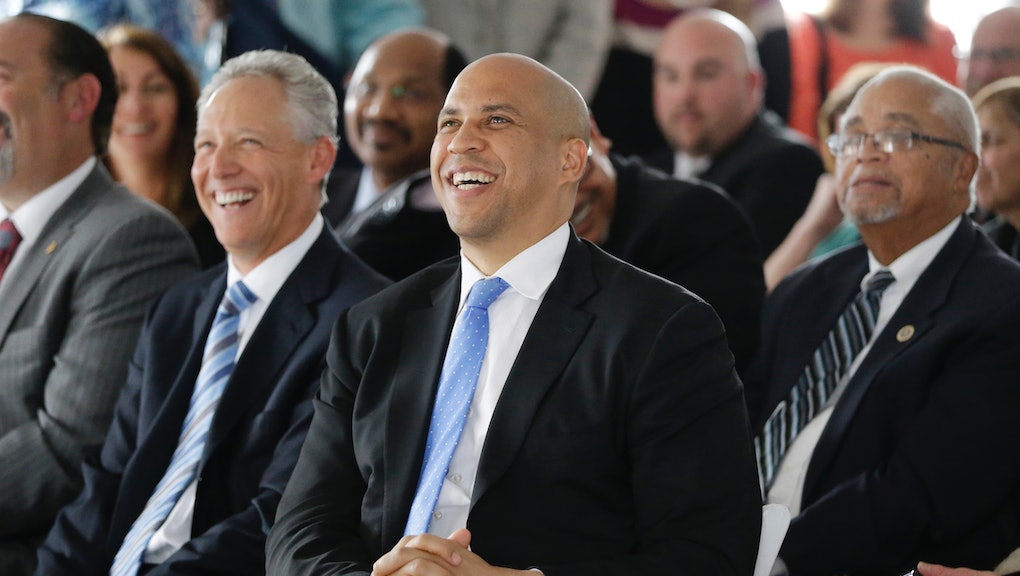 15 years ago, a bright-eyed young man fresh out of law school looked for a way to shake up city politics in Newark, New Jersey.  In the spirit of change, the newly elected Newark city councilman decided to go on a 10-day hunger strike. As it turns out, depriving his stocky body of food for almost two weeks led to the kind of success the politician envisioned. In addition to raising a local and national awareness about issues of drug dealing and violence, the reputation Booker established propelled him to the mayor's office 2006.  In fact, on Oct. 16, Cory Booker became the United States Senator-elect from the state of New Jersey – the first African American to do so.  So, as we track the rise of Booker, the ninth African American senator and only fourth elected by popular vote, one must ask, “What does Cory Booker’s election suggest about today’s black politics?”

Reaching the upper chamber slightly less than a decade after Barack Obama, Booker’s story is inextricably linked to the lanky Chicago politician. Throughout his campaign, Booker borrowed heavily from Obama’s 2008 message of unity. “Too many people are forgetting that the lines that divide us are nothing compared to the ties that bind us,” said Booker upon his election. However, it is not just his verbiage that connects him to the nation’s first African American president; it is Booker’s story. In fact, Booker’s chronicle actually solidifies Obama’s narrative as the blueprint for today’s black politician to be successful on the national stage. Here are four steps from that blueprint.

1. A middle-class upbringing topped off by education at elite private universities

Just like Obama, Booker comes from a middle-class background (well, upper middle class). While Obama spent his childhood running the beautiful shores of Hawai'i under the guidance of his middle-class maternal grandparents, Booker matriculated out of a wealthy suburb in New Jersey; Harrington Park to be exact. Similar to how Obama would go on to earn degrees from Columbia University and Harvard, Booker, too, inundated himself in elite academic pedigree by earning degrees from Stanford and Yale. Furthermore, while Obama successfully became the first African American President of the Harvard Law Review, Oxford University awarded Booker with one of the most prestigious academic awards on the planet – the Rhodes Scholarship.  The similarities in socioeconomic background and educational experiences indicate a trend in the lives of these two black politicians building up to their careers in office.

Barack Obama’s historic 2008 campaign made headlines for its use of social media to change the domain of voter mobilization. The New York Times described his campaign as “an online movement that begot offline behavior, including producing youth voter turnout.” Similarly, Booker amassed the strongest Twitter following of any local political figure in the country as he responded to local constituency complaints via the social media platform.

During Obama’s run for presidency, he faced scrutiny for his time spent as a community organizer for a predominantly black housing project in Chicago's South Side. In fact, Sarah Palin slammed the then-presidential hopeful by suggesting that community organizers have no real responsibilities. Booker also involved himself in organizing efforts in Newark,  a predominantly African American city, by mobilizing residents in a housing project into which he moved. Thus, Booker, like Obama, established himself as a leader within a large black community en route to public office.

Despite public and intellectual rumblings about an American post-racial society, the under-representation of African Americans in government suggests that race stands as an obstacle for black candidates. How Obama and Booker navigated their racial identity highlights an interesting difference between the two. While Obama constructed his black identity as something he sought after through learning, organizing, and community interaction, Booker vindicates his blackness through a sort of inheritance – anecdotes of his parents and grandparents that channel African American cultural tropes like the black church. Despite the differences in approach, blackness becomes a humanizing aspect for both Obama and Booker, something that makes them “real.”

When Obama swept onto the national scene in 2007, he caught the nation by such a surprise that very few knew what sort of affect the success of his candidacy would have on black politics moving foreword.  The rise of Cory Booker behind Obama answers this question.  Booker’s election shows what type of story Americans are willing to embrace when considering black politicians in the 21st century. He is an organizer with an Ivy League degree to his name. He embraces social media and uses blackness to show that he is not aloof. He is the national black politician in our day and age.