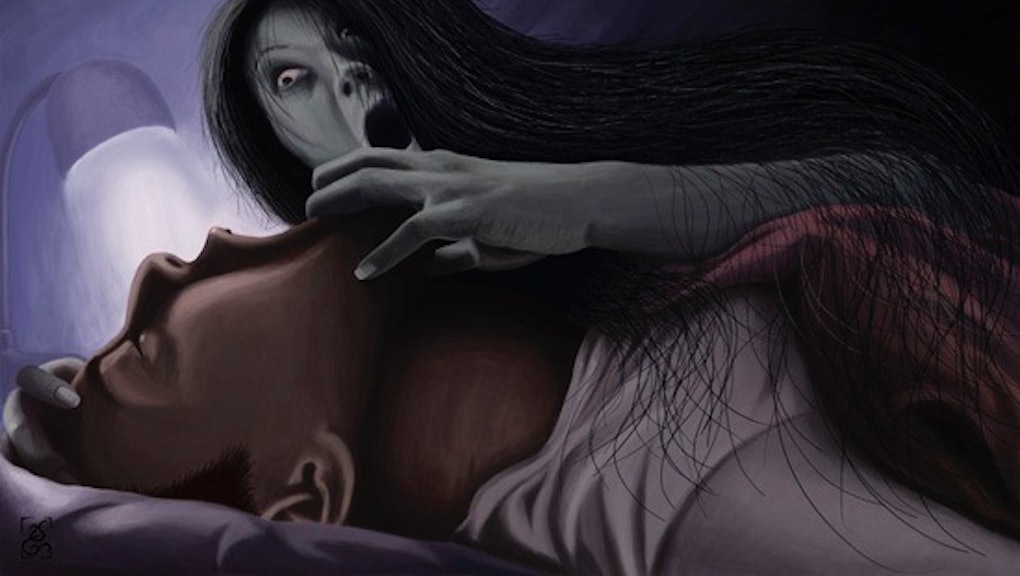 The Bizarre Science Behind Your Favorite Horror Films

With Halloween quickly approaching, our inexplicable obsession with horror films has reached its yearly pinnacle. In recent years, the influx of flicks based on terrifying "true" paranormal events has gripped audiences in theaters and homes across the nation, but how true are these hauntings? A little research and some personal experience revealed the shocking reality of these supernatural occurrences that, often, are even more bizarre than the films they inspire.

From A Nightmare on Elm Street to The Haunting in Connecticut, most tales begin with some eerie experience during a "victim's" sleep. People feel a strange presence in the room — something touching them in the night, voices whispering in the dark, a demon stalking around their bed. While these are all extremely frightening, they are, in fact, extremely explicable by science and commonly experienced. Stick with me, this is where it gets weird.

The Haunting in Connecticut is an excellent example. The film details the chilling experience of a family who is terrorized by an otherworldly menace in their new house. The movie is based on a real family, the Snedekers, who investigated a strange presence in their house with the help of a real paranormal expert, John Zaffis. Zaffis spent a lot of time in the house with the family and was convinced that a malevolent force was indeed haunting the family. In an interview with Chiller, Zaffis said that, during supernatural episodes, the mother, Carmen, was overcome by a "deep paralysis" in which she was conscious but could not move or call out for help. Thank you, Mr. Zaffis, that's all the evidence I need.

Zaffis called this phenomenon "phantomania," but I had undergone something remarkably similar that I am positive had nothing to do with ghosts or ghouls. There is a very real and well-documented sleeping disorder called sleep paralysis. When the brain enters REM sleep, the period in which we dream, it paralyzes the muscles to prevent the body from acting out dreams or harming itself. When REM sleep breaks suddenly, the body can get temporarily out of sync with the brain, allowing the person to be conscious of their paralysis.

I speak from experience when I say that sleep paralysis is absolutely terrifying. It feels as if a weight is pressing down from above, gluing your body to the bed. Not only can you not move, but also there are hallucinations. Yes, hallucinations. The stress of the sudden paralysis and the half-sleep state can conjure visions of figures sitting at the end of the bed or walking around the room, an acute sense of danger, the feeling of someone touching you, the feeling that someone is attacking you, the feeling someone is sexually assaulting you, the sound of footsteps or voices, and even out-of-body experiences. Is this starting to sound more and more like your favorite horror movie? These hallucinations can be seen depicted in paintings dating back to the 18th century and, to the uninformed dreamer, can seem like an actual visit from a demon or spirit.

Now, I can't explain pictures falling off the wall or doors swinging shut (though I would suggest maybe some routine maintenance), but, to me, these Hollywood hauntings sound like a classic case of sleep paralysis. The hallucinations may have only been the beginning of the story, but tell a few people about your experience and introduce an "expert" into the situation and people start seeing and hearing things in a different way. When you are looking for something to be scary, odds are you will find it whether it is there or not.

While surveys struggle to pinpoint just how many people suffer from sleep paralysis, Scientific American estimates that 5% of the population has felt this strange sensation multiple times. The rest of you don't get off so easily, though. It is also thought that anywhere from 20 to 60% of the adult population will experience sleep paralysis at least once in their lifetime. Get ready, folks, it is a better fright than any horror movie you will ever see.

I wake up paralyzed relatively frequently — a couple times a month. Some of my stories would probably make you think twice about going to sleep again, and, as a child, I was certain that my room was haunted on several occasions. The best way to combat sleep paralysis is to prepare yourself. If you know what is happening and can relax during the process, the ordeal is much less stressful. For you horror junkies, though, maybe you will get a front row seat to the inspiration behind your favorite thrills. Sit back, relax, and enjoy the show. You aren't going anywhere.