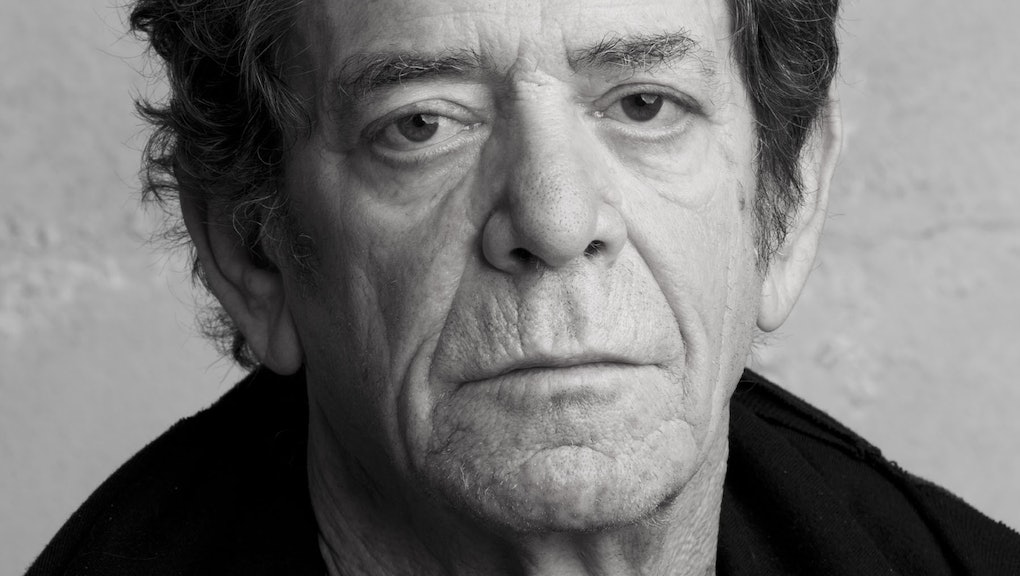 An Elegy For Lou Reed

The early Christian Church believed that if all the books of the gospels, all the letters of Peter and Paul, and all the records of the early ministry were destroyed, Christianity could be reconstructed using the book of Isaiah. Everything that those works made explicit was already implicit in Isaiah.

Today, I've thought a lot about that idea. Lou Reed is the Isaiah of so much of the past 40 years of music history. It seems that, between the chugging piano chords of "I'm Waiting for the Man," under the sighing lamentations of "Jesus," or behind the gauzy background vocals of "Walk on the Wild Side" lay the entire future of rock music. He was the inspiration for punk, college radio, grunge, and indie. Lou Reed's influence on rock music is incalculable because the very term "rock music" refers to something that we can't even conceptualize without Reed. Writing about his influence on music is like writing about rain's influence on the water cycle.

But I'll try. Lou Reed was the singer, guitarist, and principal songwriter of the Velvet Underground. He released four albums with them; none of those albums includes a bad song. They broke into minor prominence via their association with Andy Warhol, and were sort of the house band at his Factory. They played droning songs about heroin and BDSM while Factory Girls danced and strobe lights flashed, and Warhol watched over the whole thing like some pale, awkward wizard. They were cool — wearing all black or, for one show, all white. They wore sunglasses and sometimes Nico, a tall model with a vaguely German accent, sang their songs. They were Greg Corso to the hippies' Allen Ginsberg, and they played rock and roll with the detached cool of Miles Davis during his Kind of Blue period.

But they also wrote songs — or mostly Lou did — and they hold up damn well 45 years on. The Velvets are probably best known for their art school cool and their flagrant, unrepentant exploration of the themes of sex and drugs, but Lou Reed could write a song that would wring tears out of a stone. He wrote some of the sweetest songs of that time, from "Who Loves the Sun" and "I'm Sticking with You" to "Pale Blue Eyes" and "Sunday Morning." These songs ache with longing and pure, honest love. The dirty secret of Lou Reed is that he wrote his best work when he just sat down and wrote old-fashioned love songs. He wrote,

I'll be your mirror,

reflect what you are in case you don't know

I'll be the wind, the rain and the sunset,

the light on your door to show that you're home

And then passed it off to Nico because he knew his pen had written a check that his Brooklyn sneer couldn't cash.

Help me in my weakness

Cause I've fallen out of grace

And nobody, not even Reed himself, knew if he was kidding.

He wrote lyrics you could crochet on a throw pillow and give to your grandma, and other lyrics you wouldn't want your grandma to ever catch you singing. The Velvet Underground was a band whose name came from a dirty novel and whose songs came from the heart. They came from the broken, brittle heart of Lou Reed.

Lou Reed never recorded a solo album that was as good as his work with the Velvets, but he came close. Transformer was his attempt at glam rock, and it mostly works, featuring the hit "Walk on the Wild Side" and the song "Perfect Day." The latter is vintage Reed. He sings "You made me feel like someone else, someone good," and he's leaning on the sweet half of that lyric, letting the bitter self-hatred seethe in through the bottom. Berlin is a crazy Cold War concept album, but it's also got some great songs. Coney Island Baby sounds like it would be Woody Allen's favorite album if Woody Allen didn't, for some reason, hate rock music. New York is the only great album of Lou Reed's later career, but it's as good as any of his solo work. It's a love letter to the city that raised him and that he helped define. He wrote it in 1989 while the city was mired in crime, white flight, and AIDS. It's elegiac and ecstatic, and it could only have been written by Lou Reed.

Lou Reed will be primarily remembered as the main creative force behind one of the greatest bands of the 60s, and that's fine. So will Paul McCartney, RAM notwithstanding. He was more than that too, as the best of his solo work attests. He was as diverse a songwriter as anybody alive today, despite his reputation for being that old hipster who talk-sings over blues progressions. He could be angry, or sarcastic, funny, or heartbreaking, sweet, or bitter. He could be all at once, in the same song, in the same note.

I first bought The Velvet Underground and Nico when I was fifteen. I bought it at a record store in downtown Seattle, and I brought it home and stuck it in my CD player and it never left. I loved its cover; I loved how the big, yellow banana was at once totally innocent and flagrantly dirty. That was Reed. He was a saint and a sinner, a moralist, and a junkie. He was the best.

You'll probably read a lot about Lou Reed in the coming months. If you get anything from this article, or from the thousands like it, let it be this: listen to these songs. Pass them on to your friends like they're some secret gospel, because these are songs that change lives. Make lists of your favorite songs, and debate which solo album is the best, and whether or not Transformer is more of a Bowie album, anyway. But mostly listen to these songs. Listen to them until your life, too, is saved by rock and roll.