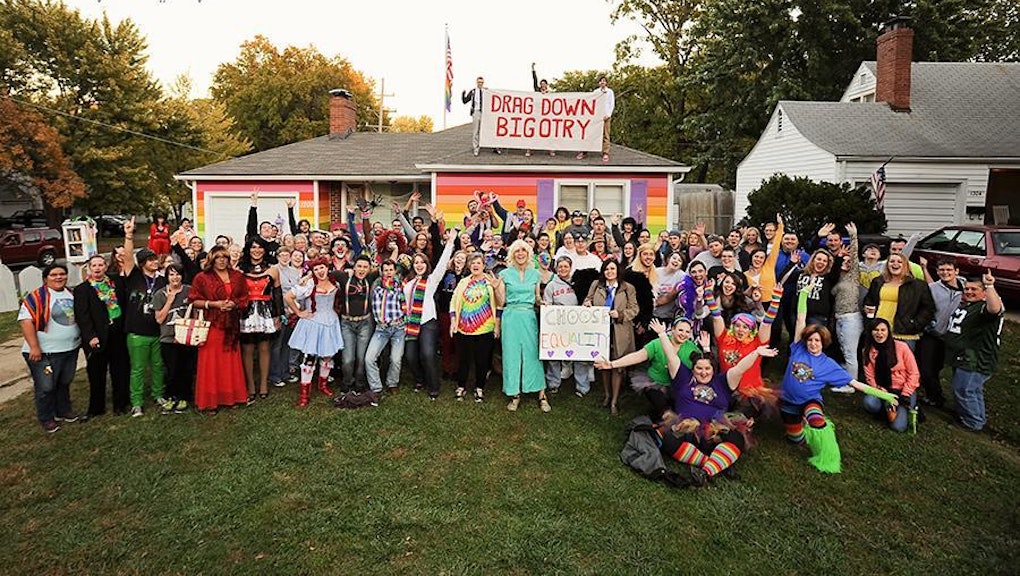 The Equality House of Topeka, Kansas put its most fabulous foot forward last Saturday with a drag parade in Westboro Baptist Church's front yard, reported both the Huffington Post and the House's Facebook page. Iconically painted in rainbow stripes, the tribute to queer rights stands as a tribute to queer rights and as a symbol of opposition to Westboro Baptist and their belief that homosexuality is not only wrong in the eyes of God but is responsible for the weakening of America.

The "Drag Down Bigotry" Halloween drag parade raised awareness to the frightening rate of LGBTQQ teen suicides that result from bullying. Many in the community, including Equality House's parent organization Planting Peace, maintain that queer teens are drastically more likely to take their own lives. The House argues "the fact is that teenagers across the country are taking their lives every year at an alarming rate." Queer activists and allies gathered at the Equality House to celebrate what the group's Facebook page entitled the scariest thing on Earth: equality.

1. Crowds Gather At the Equality House

An activist dances on a stage at "Drag Down Bigotry," a Halloween-themed drag queen parade at the Equality House across the street from Westboro Baptist Church.

One activist (left) dresses to mock the Westboro parishioners (who often protest funerals with incendiary signs); the other dresses in a rainbow body suit labeled 1200, referencing the House's address on SW Orleans Street in Topeka, Kansas.

The Equality House is painted in the rainbow stripes of the Pride Flag and serves as a resource center for the LGBTQQ community. Standing across from Westboro Baptist Church, its mission is to stand against the hatred of the church while promoting anti-bullying campaigns.

5. Dressing in Drag For a Cause

A man in drag poses for the camera at Equality House's drag parade on October 26.

6. Get 'Em While They're Young

A man carries a smiling young girl on his shoulders at a drag parade in Topeka. Young people are critical in the battle against bullying.