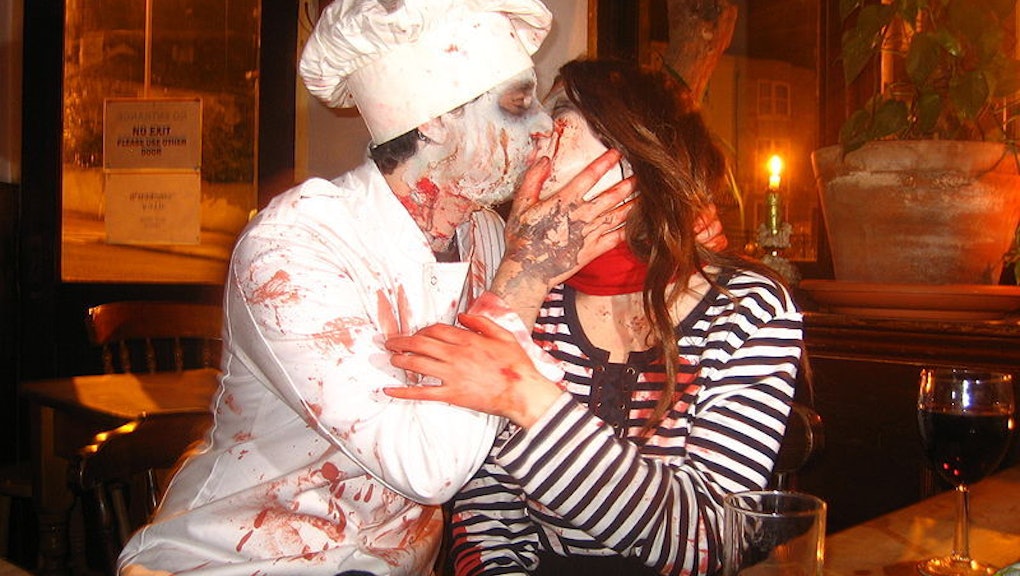 I love Halloween. Since I was kid, every Halloween has been the chance to be someone or something completely different. At 9, I was a zombie and got featured on the local news. At 12, I was Al Gore and got mistaken for a Jehovah’s Witness. Last year, I went as a cop and unintentionally was perceived as a stripper.

Sexy or not, serious or hilarious, as a guy at Halloween, much like life the other 364 days of the year, there are no limits to what I can be.

And yet, every year, it’s the same charade: We market nearly only sexy or sexist costumes to girls and women and then turn around and mock their choices as “Sluttoween.”

As The Daily Show’s Kristen Schaal wryly noted, we may as well just trot out vagina costumes.

While women should absolutely be encouraged to wear whatever they wish, it seems the hypocrisy is that we act as though women aren't objectified on a constant basis throughout the rest of the year, as Soraya Chemaly brilliantly lays out here. Therefore, the vast majority of costumes marketed to women are hypersexualized, whereas men have this wide range of selection from which to choose, with varying levels of sexuality.

Schall's annoyance with the double standard is evident when she sarcastically observes, "Isn't it great? The fact that women get this one night — only one — to be viewed as sexual objects, and we get to choose what kind!"

To counter that, I present to you five sexy costumes for sexist men:

Believes that government should have no power in a person's personal life and therefore, strongly supports a woman's right to choose. Would never dream of forming a panel on women's issues that is solely composed of white men. Loves making money and realizes that breaking barriers down for women not only is the right thing to do but also doubles the available talent for industries and record-breaking profit. Believes in "American Exceptional Equality."

Believes that patriarchal values hurt men, too, and sees feminists as essential allies in undoing all gender inequity. Would never threaten a feminist with rape or murder under any circumstances. Does his homework and realizes that many of the issues supposedly affecting men are actually myths.

Not only does this guy understand privilege, but he consistently works to point it out when discussing current events. He also adamantly questions why more women and people of color aren’t hired for top gigs in his world.

Has a nuanced understanding of his company’s sexual harassment and assault policies and strongly enforces them. Sets the tone for a respectful work environment. Allocates space for breastfeeding mothers. Encourages mothers and fathers to use maternity/paternity leave. Holds women and men under him to the same standards and pays them equally for their position.