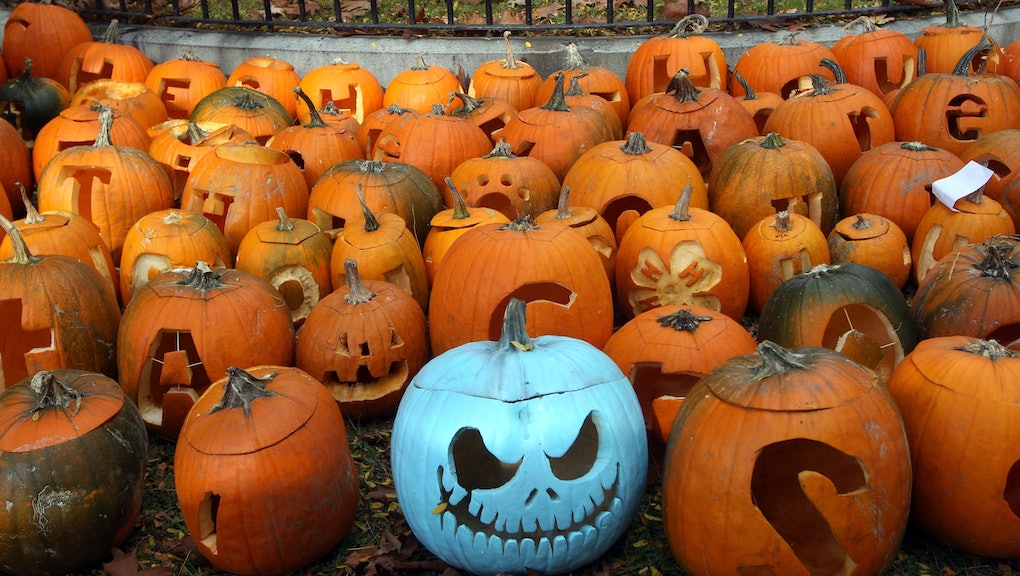 Halloween History: These Drunken Games Date Back to Ancient Times

With the exception of the 4th of July (who doesn't love combining patriotism and explosives), Halloween has always been my favorite holiday. Sure, there aren't any gifts or glittery trees like at Christmas, but what Halloween does have is chocolate — and lots of it. The ability to put on a costume and become someone else for a night was always appealing, too. When I transitioned from trick-or-treating to college Halloween parties, the costume part stuck and the games really put spirit (of the liquid variety, mainly) into the holiday. I doubt I'm the only one with memories like that.

In fact, there are a lot of people throughout history with memories like that. The versions of Halloween games and activities we played as children — and then with alcohol added as adults — are not new inventions. Take bobbing for apples, for example. If you go searching looking for its origin on occult leaning websites and sites that thrive on traffic driven by tourism interest, you may be persuaded that apple bobbing dates back to the pagan festival of Samhain and celebrates the end of the harvest season. Or you might find it originates in rituals venerating Pomona, the Roman goddess of fruit trees. Apple bobbing may not actually be an ancient practice, but it does definitely date back to before the 1800s in the British Isles where it was a dating game.

Another staple of Halloween parties is racing to make friends into toilet paper mummies. The exact opposite was a popular party activity during the Victorian era. Mummy unwrapping parties were all the rage and often special invitations were sent out for the occasion. The practice had a resurgence in 1950s Germany. This resurgence likely explains the mummy — complete with sarcophagus and death mask — found in a German attic earlier this fall. Dealing with constantly ripping off toilet paper seems a lot nicer now that I know the alternative would be unwrapping a corpse.

Competitions to carve — or draw, for those too young to wield a blade — the best pumpkin are a fun Halloween tradition. And while making pumpkin carving a true art has really only come into fashion in recent years, jack-o-lanterns have been in existence for centuries. The practice stems from the Irish myth of "Stingy Jack" who, according to myth, cheated the devil and has to walk the earth forever with only a carved-out turnip for a lantern. This inspired the first faces carved into root vegetables to ward off evil spirits.

Enjoy Halloween this week. Carve a pumpkin. Drink some creepy themed cocktails. Maybe even find a special someone because you bit into the right apple. And be vigilant for vengeful mummies looking for descendants of the jerk who unwrapped him.