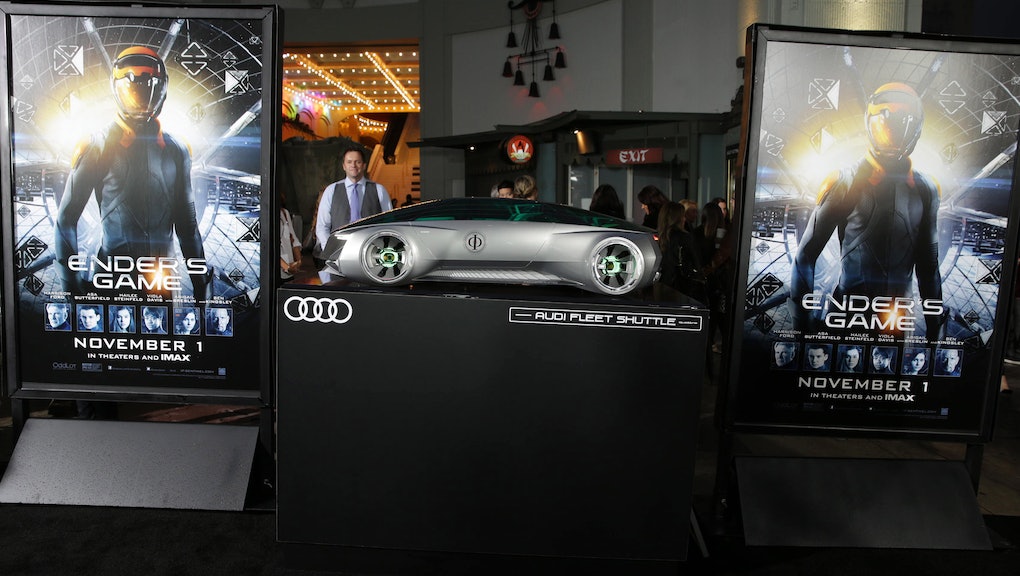 Why We Shouldn't Feel Guilty About Seeing 'Ender's Game'

I was in middle school when I first read Ender’s Game. I’m not going to lie: I loved it. I was entranced by the Young-Male-Hero- is-the-Chosen-One-to-Save-Everything storyline. Other books I loved at that time were Dune and The Power of One, both about young boys who could almost never lose in their struggles against evil, even though they had some tough breaks in the beginning.

These were satisfying stories because early on in the narrative you get a glimpse of what’s going to happen: battles, sure, but there's no chance your hero will suffer any major defeats.

I had an easy life myself, but many of the heroines I identified with in my early, girl-literature phase, didn’t end up so victorious. Jo March marries a random old man. Francie Nolan marries her second choice. Anne of Green Gables has a million babies and just gets boring. These sci-fi and sci-fi-esque (the The Power of One is more like historical fantasy masquerading as a novel) heroes may have been men, but I liked their trajectory; it fit more with the way I imagined my life turning out, even if I was a girl and not a boy and my world was a college town in Oregon in the 1990s. My parents and the important people around me told me I definitely could do whatever I wanted to do and none of it, ever, had to be related to who I married. So it wasn’t even as if I read these books wishing I was the boy protagonist, I read them AS the boy protagonist. I didn’t make a distinction.

Now, with Ender’s Game coming to movie theaters FINALLY this Friday, a lot of us who loved the book when we were in our center-of-the-universe phase of adolescence are having to do some soul searching.

You know the story: Orson Scott Card, who wrote the book, is a homophobic Mormon who actively campaigns AGAINST the right for everyone to get gay married. He’s already super rich and every person who goes to see his movie is putting money in his pocket, which he will surely put towards his anti-gay-rights campaign activities.

Now, I’m not a Orson Scott Card apologist, but I think it shouldn’t surprise anyone that a man who writes such obvious adolescent fantasies has the emotional maturity of an adolescent and, to be honest, the tiny bit of work he can do with his money fighting an absolutely losing campaign against the right of gay people to get married, is a drop in the bucket against the good work he has already inadvertently done with his writing.

The truth is, it doesn’t matter what his political feelings, religious leanings, or intention was with Ender’s Game, or any of his books for that matter. Once he wrote his stories, they stopped existing in his mind and they started existing in the minds of the people who read them. And that story, for most of us (and probably for Card), is basically apolitical. It’s the story of a young person learning to deal with jerks and harness his great power.

The reason it resonates with so many young people is that he told it well. He created a character that felt honest, probably because he was plumbing his own humanity. Even if he is a jerk on our planet, he is still a human who went through the torment we commonly call the early teens.

Orson Scott Card has written a lot of books and I certainly haven’t read all of them. However, the one I remember most vividly is called Pastwatch: The Redemption of Christopher Columbus. In it, people of the future basically come back in time and inoculate and arm the native people of the Americas so that the fight is more fair against old Christopher and his band of conquerors. The main character of this story is a woman, and I did a book report on this book in middle school. It completely jibed with my worldview at the time which was: it would be AWESOME to fix these horrible wrongs our ancestors did.

Of course, this is a very simplistic way to look at the world and I am an adult now who knows now that life is suffering and inequity and there are no quick fixes. There are no perfect heroes, either. Life is a mixture of success and disappointment and no one wins every battle and everyone eventually dies. But I remember feeling energized by Pastwatch, just like I was by Ender’s Game. And it was only later that I looked back and thought, "Ugh, maybe I shouldn’t have liked those books."

No matter. Orson Scott Card isn’t my dad, so he wasn’t able to hand down his dogma to me. Instead he handed down his personal narrative, his dream narrative, of a world where kids kicked ass and where you could actually change history through big acts, caring about what was good, and beating the bullies.

So who cares what he thinks about gay marriage? He’s on the wrong side of history and he probably knows it. There’s nothing he can do to stop the inevitable.

Ironically, he probably actually helped it along by telling kids to believe in themselves and be superheroes and do what they knew was right.

He gave us the structure. Luckily for us, he doesn't get to fill in the details.