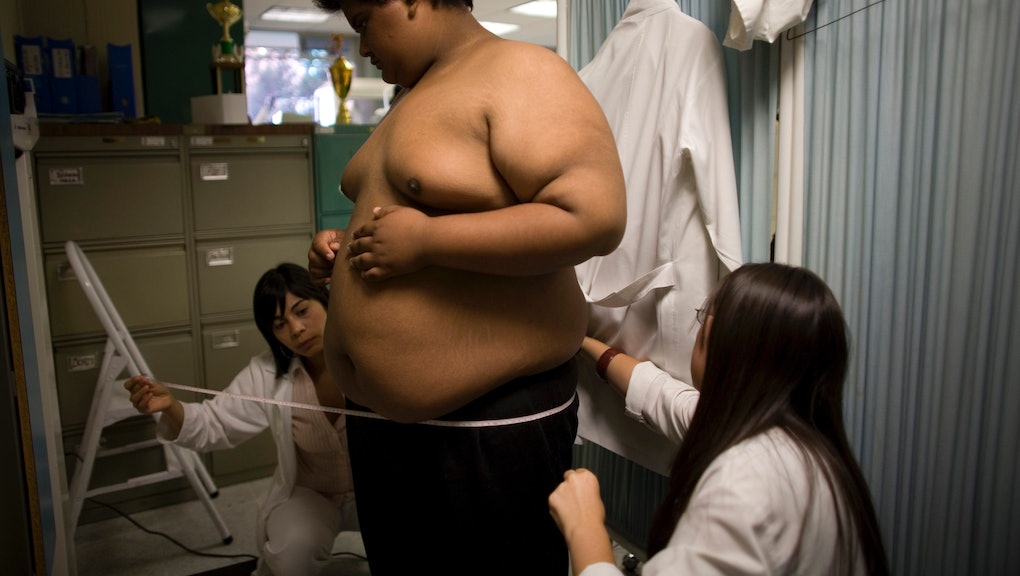 Moobs: Not What You Think

I was recently brainstorming masculinity issues with a friend who suggested investigating the term "moobs" — and I laughed out loud.

Now I wish I could retract that laugh.

As it turns out, moobs are a serious body image issue for men and sometimes even a medical condition. Perhaps it’s time we revisit their comedic value.

Moobs, is a contraction of the term "man boobs" — a reference to a man’s chest that has extra tissue on the pectorals, giving the man what sort of look like small boobs. It is unclear when and where the term actually originated, but it probably came from the United States, and it made its first print appearance on the BBC in the United Kingdom in 2004. It has since been championed by tabloids and comedy websites. In fact, Funny or Die has an entire topic area dedicated to it.

So what proof do I have that a man's chest is a body image issue? The first is the fact that there is a push-up bra-like shirt that gives the appearance of having large pecs. The second is an undershirt that suppresses moobs like a corset, and is marketed to men with gynecomastia: a medical condition that is definitely not a joke.

According to the Mayo Clinic, gynecomastia is "swelling of the breast tissue in boys or men, caused by an imbalance of the hormones estrogen and testosterone." In other words: medically caused moobs. Matt Cornell wrote about his struggle with the condition for The Guardian last year, recounting his anxiety as an adolescent poignantly and highlighting the ridicule and bullying he faced.

And while I’m sure fewer people would be comfortable insulting a man with gynecomastia, many people feel totally fine doing so with overweight people.

A 2012 Harris Interactive/HealthDay poll found that 61% of people "do not consider negative remarks about a person’s weight to be offensive." Indeed, simple Google searches such as "ridiculing fat people" yield almost as many articles supporting fat- shaming as articles calling for more respectful treatment of bigger bodies. A recent Psychology Today article confirmed what previous studies have shown: in the United States, fat people are often viewed as symbols of sloth and a lack of willpower, which is how thinner people feel justified mocking them.

See: the near-universal use of moobs as a set piece in bro-films.

And there is a cost. A University of the West of England study found that moobs and beer bellies were two of the top body image concerns among British men. Additionally, male breast reduction surgeries have steadily been on the rise in the U.K. since the mid-2000s. Up to 66% of these surgeries are attributed to gynecomastia, suggesting that insecurity with the benign condition can be so significant that many men are taking extreme measures to remedy it.

As for me, the Austin Powers movies are some of my favorite comedies of all time (don’t judge me) and "Fat Bastard" is one of my favorite characters; but I’m reconsidering the hilarity of his comical reference to his own "titties." The mere fact of the term "moobs" indicates a bullying society comfortable making fun of people for not having the ideal body. That doesn't seem right.

Laugh if you want, but at least be real about what's making you laugh.