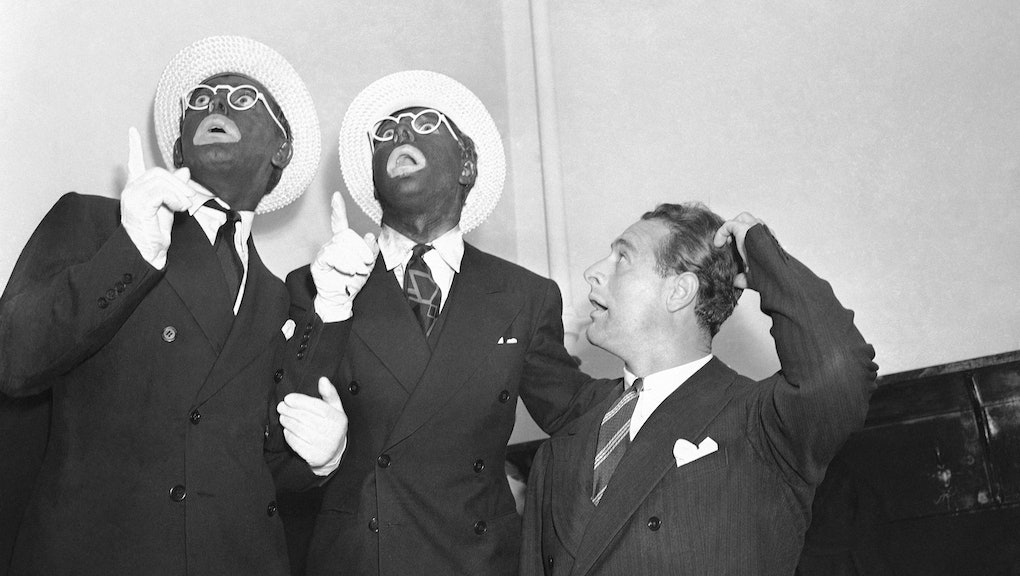 It's a Happy Halloween For Racists

Hough could've simply worn an orange jumpsuit and pulled her hair into Bantu knots, but she painted her skin a strange bronze-ish hue instead. Her stunt was an act of cultural appropriation, defined by fellow PolicyMic pundit Arielle Newton as "what happens when dominant culture misrepresents elements of a subjugated cultural group."

Hough wasn't the sole offender this year. Greg Cimeno and William Filene made fodder of a teenager's tragic death when they decided to dress up as George Zimmerman and Trayvon Martin, complete with red paint marking the spot where a bullet pierced Martin's 17-year-old heart.

Cultural appropriation — especially when it’s marketed as entertainment — reminds me just how ridiculous and false post-racial discourse is. Post-racial theorists tout desegregation, interracial marriages, the election and re-election of President Barack Obama, and other milestones as proof that racism is a cultural travesty that was abandoned in 1863. But racism is still rampant, long after the ink dried on the Emancipation Proclamation.

Racism arises from its shallow grave on a daily basis, haunting the chambers of Congress and the aisles of Barney's New York. Yet, Halloween especially troubles me. October 31 isn't just a harmless date for children to don cute costumes and sing for candy at the doors of their neighbors. It's often used to caricature marginalized groups for entertainment.

It is a disgusting behavior that Dr. Brittney Cooper, an assistant professor at Rutgers University, theorizes as white bodies seeing black bodies as a "permissive site for the expression of trauma, pain, and illicit pleasures." Wearing black, red, and yellowface allows white people to "do everything they are uncomfortable doing in a white body: being lewd and crude, celebrating violence, acting sexually promiscuous, [and] using racial slurs."

I am familiar with the appropriating of black American culture for the distinctive purpose of liberating white women. Miley Cyrus’ "transformation" is a good example. Twerking, wearing grills, and associating with rappers gives Cyrus an edge that she can use to distance herself from the image Disney manufactured for her. However, it is done at the expense of Southern black American culture, without regard for how her white and female privilege shields her from the criticism ordinarily associated with twerking performed by black American women.

What's worse is most people don't even consider cultural appropriation until backlash ensues. Hough tweeted her apologies, and claimed that she never intended "to be disrespectful or demeaning to anyone in any way."

Oppressive Halloween costumes — like the one Hough wore — and her apology reveals a sinister concept that I'm still struggling to grasp: Most people wearing these costumes and taking pictures for social media aren't members of the Ku Klux Klan or open supporters of destroying the 1965 Voting Rights Act.

We live in a world where racist acts are committed by people that don’t see themselves or their behaviors as racists. There is a gap between what racism is and what we've been culturally conditioned to perceive it as. Dr. Eduardo Bonilla-Silva, a sociology professor at Duke University, deems modern understanding of race relations as "colorblind racism." Racism wasn’t eradicated when schools were successfully desegregated; instead, it’s reformed and reshaped to exist in our current moment.

In his book, Racism with Racists: Color-Blind Racism and the Persistence of Racial Inequality in America, Bonilla-Silva argues that "compared to Jim Crow racism, the ideology of colorblindness seems likes 'racist lite.'" There are no police officers hosing down peaceful protesters. There are no "whites only" signs hanging in front of public restrooms. But that doesn’t mean racism isn’t still impacting the lives of people of color. Because racism is conflated with the Jim Crow South — and often excludes analyses of how Northern states were also prejudiced and invested in white supremacy — modern perpetuators of racism don’t see their behaviors as racist.

Bonilla-Silva outlines four central frames to the development and circulation of colorblind racism. One of those frames is minimization. Minimized racism views it as a past issue that is only relevant when it's unburied and discussed. It is the minimizing of racism that produces terms like "playing the race card" and "reverse racism" and disregards contemporary examples of racist behavior, like Hough's Halloween attire.

Seeing racism as a historical issue with no modern imprint creates a gap between how millennials view racism versus what it actually is, and how it is produced in this moment. Hough's blackface costume has a lineage that includes the degradation and oppression of black Americans, so she may not be a racist, but her behavior reproduces racism. Millennials can't divorce her behavior from its origins, even if it is simply a costume.

We are not living in a post-racial world; Halloween is simply a sad reminder of how far we are from it.