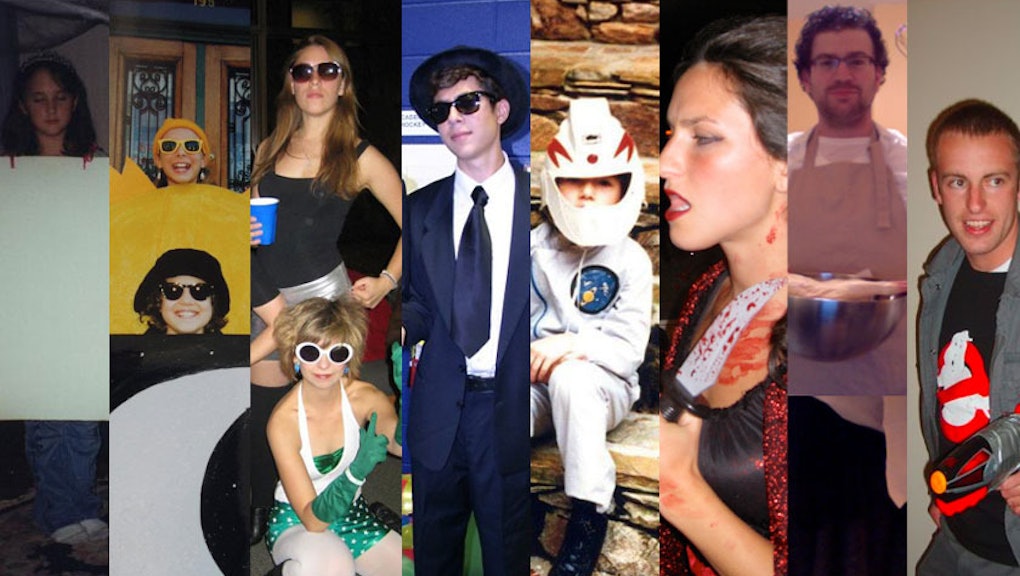 Happy Halloween PolicyMic readers! This most hallowed of holidays has auspiciously fallen on a Thursday this year, meaning its the perfect time for the second installment of our PolicyMic Staff #TBT!

This round, we've dug up some photos of the most memorable costumed moments from our pasts. Scars, blood, poultry, jorts — we've got a little something for everyone. So take a look at our getups, and then answer this question in the comments: What is the greatest Halloween costume you ever wore?

I wanted desperately to go to Space Camp (who didn't?), but instead I got an elaborate astronaut costume and a helmet with a super sweet red flashing light. And probably the best picture of my brother and I on record.

I think I'm about 11 here. My best friend and I went as the sun and the moon (I'm the sun). It took us forever to make these and I still have an X-Acto knife scar on my leg from trying to cut perfect sun rays out of cardboard.

Strong Female Characters FTW. I believe I tried to drag my roommates to a riot grrrl cover band show at [Harvard Square hotspot] Tommy Doyle's in honor of my birthday (November 1st!). The noise was terrible, but wearing spandex in public was great.

My bologna sandwich costume was not conducive to walking up the neighbors' steps for candy.

This was the year I went as Julia Child, after spending lots of time in her reassembled kitchen at the American History Museum in D.C. Extra credit to my roommate at the time, who got the brilliant last-minute idea to cut out rectangular strips of paper, write "BUTTER" on them in huge letters, and have me throw them into the mixing bowl all night.

This was a recurring costume from second grade on, well into college.

I think that year, I was feeling pretty low key and just wanted to be myself. So I dressed as Lady Macbeth: a sadistic, sociopathic, conniving, bloody, psychopathic, badass, Scottish OG. Except I'm not Scottish. And this isn't from Halloween. It was probably just another Monday afternoon.

My friends and I went as Never-Nudes one year. We realize now our costumes were insensitive. We did not mean to mock such a serious condition that millions live with every day.

I've been a clown three times in the last six years. The messy make-up was intentional. My mom sends me a "drinking cup" (that I am holding) for Halloween every year. I believe playing the part is a necessity to a  good costume, and given I was a psycho clown, I had a lot of fun.

This was for a Game of Thrones thing.