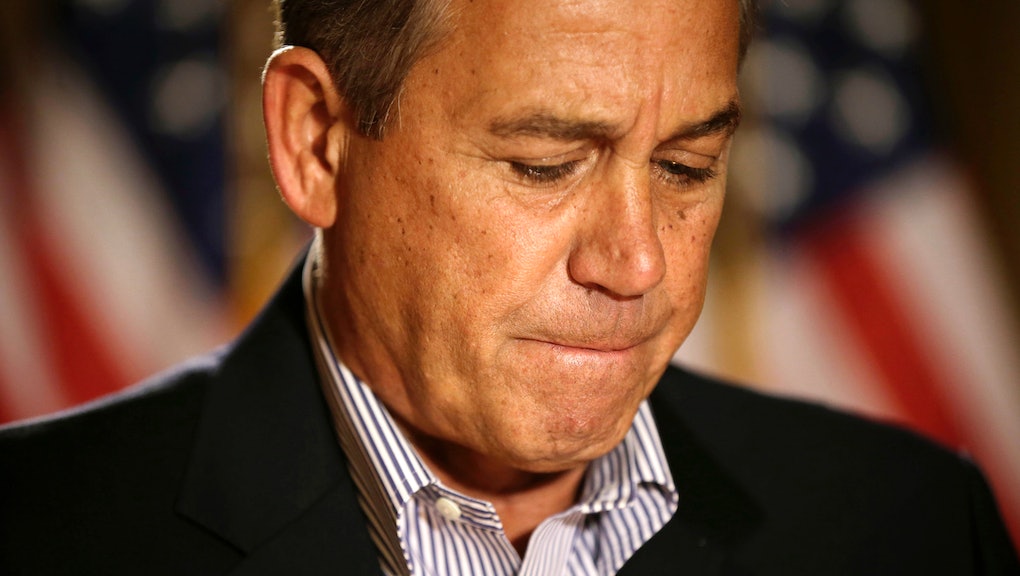 Consumer Confidence Index: Is This Massive Drop What the Tea Party Wanted?

Too bad they can't separate out a "government confidence" component. In a shock to no one, American consumer confidence dropped historically in the wake of the shambolic shutdown of the U.S. government.

Perhaps American consumers know better than to plan for an economic recovery during this brief interregnum between manufactured fiscal crises.

Predicted by Bloomberg's survey of economists to be a 5-point drop, the actual nosedive from September's revised 80.2 to October (shutdown territory) was 9 points, to 71.2. This represents the largest single-month drop since August 2011. If you cast your wincing memory back those 26 months, you'll arrive at the previous instance when the Tea Party's House of Representatives threatened to default our government. There seems to be a relation.

"What we're seeing is more hesitancy among consumers given the fiscal policy uncertainty and the absence of confidence about future employment prospects," said Wells Fargo economist and Chief Captain Obvious Michael Brown.

In fact, a crisis-induced dip is really all it could be. Between Obamacare's debut, the Treasury's threatened default, and the government shutdown, what would conceivably have pushed confidence up this month? Consumer confidence had been climbing fairly steadily in the first half of the year before plateauing as this month's much-hyped trio of uncertainties loomed closer — followed, of course, by the obvious plummet down to 71.2 upon actually hitting those deadlines. All three of these movements strongly implicate the drama in D.C with the flagging economic indicator. This measurement doesn't even begin to consider the shutdown's direct economic impact.

What we have here is the worst type of government intervention: clumsy, unintended, and without direction or limit. Sadly, the goal of the irresponsible Tea Party minority who caused the shutdown was precisely to limit the government's ability to intrude on society. In addition to the well-covered political repercussions of the Tea Party's illogical stand, this economic data details an even fuller backfiring of their agenda.