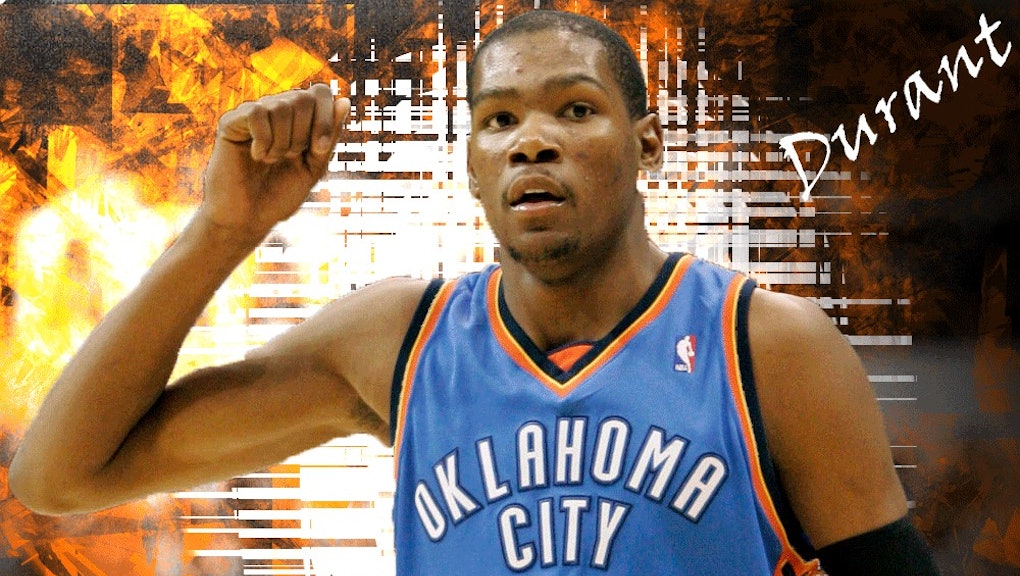 Basketball season is finally upon us and it is time to unveil predictions for this year’s incredibly competitive race for the Western conference crown. There is no clear cut favorite, which makes this season all the more exciting to watch!

With the loss of Russell Westbrook for the first 4-6 weeks of the season, Kevin Durant will have to step up his production to make up for his sidekick. Is Jeremy Lamb ready to replace James Harden as the Thunder’s sixth man? If he is, the Thunder can very likely make another finals run in 2014. With the core of the 2011 finals team mostly intact with the exception of Harden, the Thunder are an experienced squad that can overcome adversity. Durant is poised to overtake Lebron as the best player in the league, and will make this clash of superstars one of the biggest storylines of this season.

Bold Prediction: Kevin Durant will average 35 points per game until the return of Russell Westbrook, and will lead the league in scoring for the season.

Kevin Love is one of the best all-around players in the league. Although he has been plagued with injuries, 2014 may be the season that Minnesota Timberwolves fate can be reversed. With great role players such as point guard Ricky Rubio, Kevin Martin, and Nikola Pekovic, the wolves are poised to finally make the playoffs this year. Assuming the team remains healthy, the Timberwolves will be one a great show to watch for fans. The team may barely make the post-season, but as recent history has shown seeding is virtually irrelevant in the Western Conference playoffs. Do not be surprised if the Timberwolves pull a first round upset on one of the West’s powerhouses.

Bold Prediction: Ricky Rubio will the lead the NBA in assists

The progression of rookie of the year Damian Lillard will determine the viability of the Trailblazers in the West. Alongside a frontcourt that includes Lamarcus Aldridge and Nicolas Batum, the Blazers will be competitive up until the final week of the regular season. Among the Blazers off-season transactions was the addition of Robin Lopez purely for defensive purposes and Mo Williams to provide the team with scoring off the bench. Lastly, Batum is a fantasy stud and will provide help in a number of stat categories.

Ty Lawson and Javale McGee lead a squad that had considerable success in last year’s playoffs. With the departure of George Karl and Andre Igoudala, the Nuggets are without one of their key role players from last season. The much anticipated coaching debut of Brian Shaw will play an interesting dynamic for this young team. Lawson is clearly the fastest point guard and McGee is one of the most athletic big men in the NBA. If McGee keeps his composure during the season and if the roster adapts to the mid-season return of Danillo Gallinari, the Nuggets could make a run for the 8-seed in the Western. In the end, the Nuggets will be mediocre this season and will miss the playoffs.

Derrick Favors recently had a big payday signing a four-year $49 million extension with the Jazz. With the departures of Al Jefferson and Paul Millsap, Favors and Enes Kantor will have solid seasons, as they will lead the team in minutes. Also, fans should sleep on Gordon Hayward as he has the potential to lead the team in scoring this season. With rebuilding on the horizon and draft pick Trey Burke injured for the start of the season, expect the Jazz to finish at the bottom of their division.

Bold Prediction: Gordon Hayward will average 20 points per game, and lure the Jazz into grossly overpaying him.

With the hiring of former Celtic head coach Doc Rivers, the Clippers finally have the leadership they need to make a deep run into the playoffs. Chris Paul, Blake Griffin, and DeAndre Jordan make up one of the most athletic combinations in the NBA. They also have the ability to stretch the floor with a great arsenal of three-point shooters in J.J. Reddick, Jamal Crawford, Jared Dudley, Matt Barnes, and Antawn Jamison. However, it will be up to Coach Rivers to make sure that the team does not get soft during when facing aggressive frontcourts during the season. The Clippers have the players to be legitimate championship contenders. The question is, do the have the heart to win it all in June?

Bold Prediction: The Clippers will sweep the Lakers in their regular season matchups for the first time ever

Steph Curry and Klay Thompson make for the best shooting backcourt in the NBA. Their ability to spread the floor with their shot making ability provides opportunities for their big men in the paint to score easily. With Andrew Bogut, David Lee, and newly acquired Andre Igoudala manning their front court, the Warriors have a myriad of weapons to showcase this season. A number of questions linger for this squad such as who will be the sixth man: David Lee, Harrison Barnes, or Klay Thompson? Additionally, the Warriors’ season rests on Steph Curry’s ankles. Can he keep up his historic shooting and lead the NBA in three-pointers yet again? The young Warriors are taking the NBA by storm and have the potential to make a strong playoff push this year.

Bold Prediction: The Warriors will be playing in the Western Conference Finals

After a long off-season that included a change of ownership to Vivek Randivé and Shaq, the Kings are officially going to be staying in Sacramento. On the court, Demarcus Cousins is by far the best player on this team. Greivis Vasquez is a substantial pick up as he is a pass first point guard that will provide Cousins and Marcus Thorton with great looks at the basket. If Jimmer Fredette can find the three-point stroke he had in college, and is awarded more minutes, the Kings could be in playoff contention.

Coming off a gruesome Achilles injury, Kobe Bryant and the Lakers are facing their worst outlook since his days playing alongside Smush Parker and Kwame Brown. Although Steve Nash and Pau Gasol are a significant upgrade, the question is a matter of health. Can these two former all-stars stay healthy and provide Kobe enough support to will the Lakers to the playoffs? Following the departure of Dwight Howard and an embarrassing 2013 campaign, its hard to see the Lakers improving at all this season. Futhermore, do not expect the Lakers to make the playoffs.

Bold Prediction: Pau Gasol will be traded to a contender by mid-season

The Suns are hands down the worst team in the NBA. Even though the Sixers are “riggin for Wiggins”, the trade of Marcin Gortat for Emeka Okafor proves that the Suns are not trying to compete at all this season. Expect Goran Dragic and Eric Bledsoe to be the only scoring options on this team. Otherwise, unless you are a true Suns fan, you will not be tuning in to watch any of their games this season.

Bold Prediction: The Phoenix Suns will finish the year with 15 wins or less

Can the Spurs rebound? (Get it?) After being a rebound shy of winning a fifth championship for Tim Duncan, the Spurs are looking to regroup and take on the Heat once more for NBA dominance. Last year’s playoffs proved the worth of young star Kawhi Leonard, who is developing into Duncan’s protégé. With Tony Parker coming off the best season of his career and Duncan turning back the clock 10 years, expect the Spurs to once again finish with the best record in the Western Conference. Having a bench that is incredibly deep with newly added Marco Belinelli, the Spurs are among the most talented teams in the NBA. Not to mention, they have the longest tenured and best coach in the league with Gregg Popovich. They may be one year older, but the Spurs are still top to bottom the best in the west.

The addition of Dwight Howard was by far the biggest move of the offseason. Joining a team with the likes of the best shooting guard in the NBA in James Harden, this dynamic duo will take the league storm. Even though Dwight Howard is criticized for not taking the game seriously, he will be back to his 2008 form when he carried the Orlando Magic to the NBA finals especially since he is under the tutelage of Kevin Mchale and Hakeem Olajuwon. With a plethora of talent including Jeremy Lin, Chandler Parsons, and rebounding machine Omer Asik, the Rockets have great role players supporting their superstars. The dwightmare is over folks, and the Rockets are now among the NBA’s elite.

After surprising the league last season by making it to the Western Conference Finals, the Grizz have a much tougher challenge in this year’s loaded west. Reigning Defensive Player of the Year Marc Gasol leads a squad that includes veteran Zach Randolph and emerging star Mike Conley. This tandem can compete with the other “big 3’s” in the NBA. However, this team has significant weaknesses as it completely lacks a perimeter shooting threat. This inability to spread the ball will hurt their opportunities in the paint and make it difficult to navigate a Western Conference that includes a rejuvenated Dwight Howard.

Aside from having one the most ridiculous sounding names in the NBA, the Pelicans have considerable upside. Anthony Davis’ preseason stats are foreshadowing a productive season in which he could average 18 points and 10 rebounds per game. With the additions of Jrue Holiday and Tyreke Evans, the Pelicans have added more young talent to their depth chart. The major question for the Pelicans is can Eric Gordon stay healthy? If the answer is yes, the Pelicans will be the 8th seed in the Western Conference.

Two years removed from their championship season, the Dallas Mavericks quickly sunk to the bottom of the Western Conference. Their inability to make the playoffs last year brought many questions regarding the ability of Dirk Nowitzki to continue to lead the team. Bringing in Monta Ellis and Jose Calderon should ease some of the burden off Dirk’s shoulders, however you should not expect the Mavs to go far. Their center Samuel Dalembert is well past his prime and no longer has the ability to keep up with the West’s big men. The Mavs had a great decade of success, but its about time that they start rebuilding.

Bold Prediction: Monta Ellis will lead the Dallas Mavericks in scoring this year

In the end, this will without a doubt be one of the most exciting seasons as teams have more depth than anytime in the history of the league. Just sit back and enjoy the show as basketball is back!