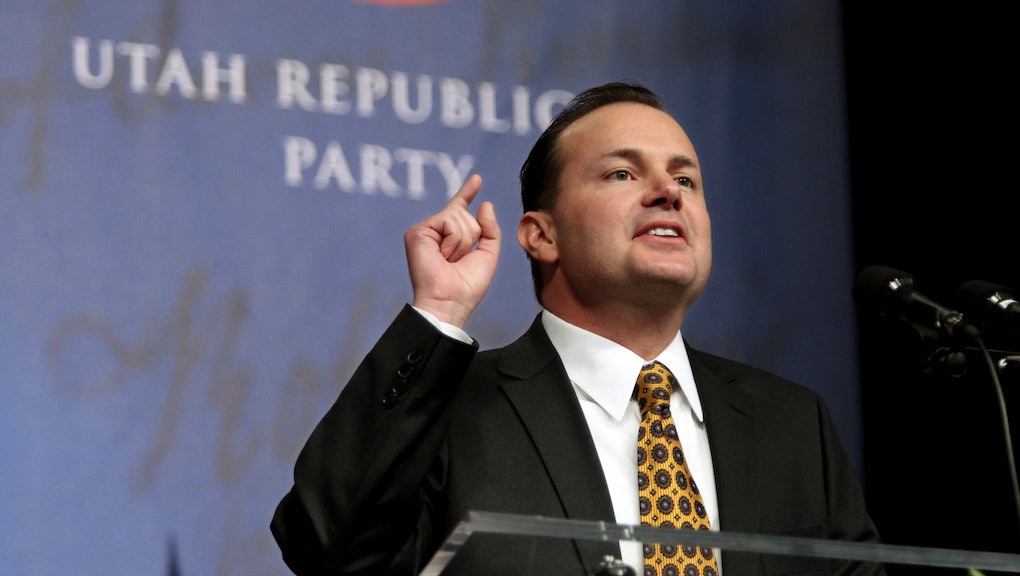 Mike On Tuesday, Senator Mike Lee (R-Utah) gave a speech titled, "What's Next For Conservatives." The speech, which can be read in its entirety here, outlined some fundamental beliefs and characteristics Lee believes are crucial to the future success of the conservative movement. With members in my generation in mind, I've highlighted five key ideas found in Senator Lee's speech that I believe set the tone for a coming conservative reawakening.

The conservative "revival" that came following President Reagan's election in 1980 did not happen overnight. It began in 1976 with the planning and adopting of a new conservative message to fit the times. Senator Lee points out that now is the time for us to build out own agenda for the 21st century. In no way should we abandon our principles, but we should find ways to showcase them through channels that are relevant to today's society.

2. "We understand that, as it is lived in America, freedom doesn’t mean you’re on your own. Freedom means we’re all in this together."

Contrary to what big-government advocates would have you believe, government is not the answer to the poverty problem facing this country — in fact, it contributes to the problem. When so many individuals are relying on government support in order to survive, the system eventually becomes too crowded and collapses. When too many people are jumping in the wagon and few are left to pull it, what happens to the wagon? It stops moving. In the same way, neighbors should be helping neighbors through tough economic times. Churches, charity groups, and other such organizations in communities should be the primary source of help for struggling individuals. Being free doesn't mean you only look out for your own interests — it means you help your friends out when you see them struggling and know that, were the tables turned, they would do the same for you. We're all in this together.

3. "Too many in Washington seem to believe that on any issue, Republicans should either have one plan — one that everyone supports in lockstep — or no plans. But unity cannot come at the expense of creativity."

Debate is healthy. It encourages creativity and at the same time builds the strongest possible plan for any given issue. With regard to the health care issue, numerous Republican politicians and organizations have developed their own alternatives to Obamacare. Rather than view this as a rift within the party, it should be viewed as a vetting process to produce the strongest possible final product. Groupthink has no place in conservative thought and politics. Individualism shines when healthy debate occurs amidst a unified coalition.

4. "For us, optimism is not just a message — it’s a principle. American conservatism, at its core, is about gratitude, and cooperation, and trust, and above all hope."

Conservatives must take on a more optimistic tone if we hope to win elections in the future. A constantly negative outlook on the future does little but drive people away from our ideas. Rather than focus on attacking the ideas of the other side, we should be enthusiastically advocating the adoption of conservative principles and values in issues that affect everyday life. Ask a parent who they would prefer to have making important decisions regarding their child's education: themselves, or the government? The answer is clear, and consequently the opportunity has arisen to share conservative ideas for education, which will leave a majority of the decision power in the hands of parents and local school districts. This enthusiastic approach is what wins policy issues and, ultimately, elections.

5. "If our generation of conservatives wants to enjoy our own defining triumph, our own 1980, we are going to have to deserve it. That means sharpening more pencils than knives."

In other words: stop fighting amongst ourselves on minor issues. Don't vilify a good elected official because you disagree with him on one issue. Don't sharpen your knife in preparation for a fight that will leave both of you wounded, sharpen your pencils and prepare for strategy and thinking sessions with fellow conservatives that will leave both of you encouraged and motivated.

Similar to what occurred in the space between the 1976 and 1980 presidential elections, today's conservative movement must define a clear set of goals for the future. Without compromising our principles, we must change the way we convey those beliefs so they coincide with today's environment. These are only five of a set of concepts that must be adopted and put into practice going forward, and millennials will play a huge part in their implementation.