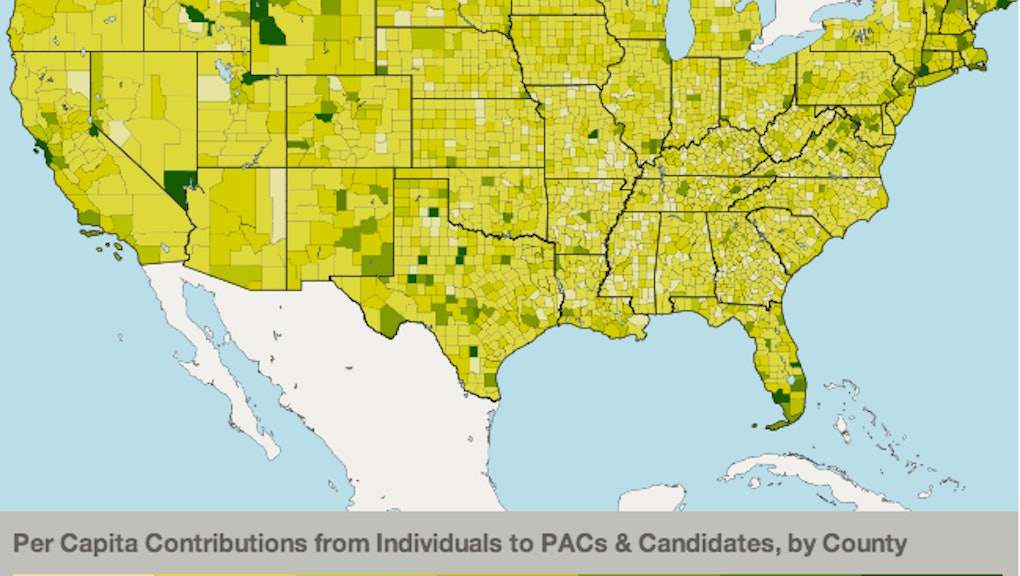 These Stunning Maps Prove Just How Much the Rich Control U.S. Politics

Earlier this month, Republican donor Shaun McCutcheon argued at the U.S. Supreme Court that his First Amendment rights are being violated by current limits on the total amount of money he can contribute to federal candidates. McCutcheon and the Republican National Committee claim that the Federal Election Commission's $48,600 limit on individual campaign contributions hinders wealthy citizens' right to support as many groups or candidates as they would like. But a new campaign finance study by the Sunlight Foundation and Azavea, a Philadelphia-based geospatial analysis firm, debunks this argument.

For example, individual contributions from the sparsely populated Sublette County in western Wyoming, which include donations from TD Ameritrade CEO and billionaire Joe Ricketts, amounted to about $12.8 million in 2012, or an incredible $1,234 per person. In Billings County, North Dakota, which has a population of only 905 people, political giving amounted to $55.23 per person. In comparison, contributions from Cook County, Illinois (where Chicago is located) totaled $102 million, but with a population of 5.2 million, that amounts to only $19.45 per person.

What does it mean that big donations from small counties have more “weight” than contributions from more populous regions? Big donors in sparsely populated counties are able to exert a disproportionate degree of political influence.

The map below shows each county’s contribution share by major political party during presidential elections. Cook County in northeastern Illinois is light blue, with 68.03% of contributions going to Obama in the 2012 election cycle. Billings County, on the other hand, is dark red because 100% (yes, 100%) of donations went to Mitt Romney’s campaign. In other words, a few wealthy GOP donors in Billings County are painting the town red.

McCutcheon claims that the current overall limit on individual contributions to federal candidates infringes on his free speech rights. However, even if we overlook the fact that Citizens United already lets him make unlimited donations to as many super PACs as he wants, this campaign finance data clearly shows that wealthy individuals are already spending huge amounts of money to express themselves in national politics.

So, why is McCutcheon really complaining? Well, let’s take a look at McCutcheon’s own county: Jefferson County, Alabama. The county’s 600,000 residents contributed more than $1.5 million to federal candidates and PACs in 2012, or $9.69 per person. On the map that shows the share of contributions to major parties, we can also see that Jefferson County is a lighter shade of red — about 75% of giving went to the Republican Party. McCutcheon has plainly stated that if the Supreme Court strikes down the overall limit, he will spend more money. Presuming that all that money goes to Republican candidates, Jefferson County would turn a deeper red. So when it comes to politics, McCutcheon doesn’t just want to speak more freely, he wants to speak more loudly.

McCutcheon believes that wealthy people spending more money on campaigns will “improve” politics. Yet the Sunlight Foundation’s data analysis shows that even with current regulations that restrict individual political contributions, wealthy Americans and their sizable donations have an enormous impact on the country’s political landscape.

Unless your definition of an "improvement" in politics is to ensure that the wealthiest Americans can give even greater amounts of money to political campaigns, we need more, not less, campaign finance regulation.