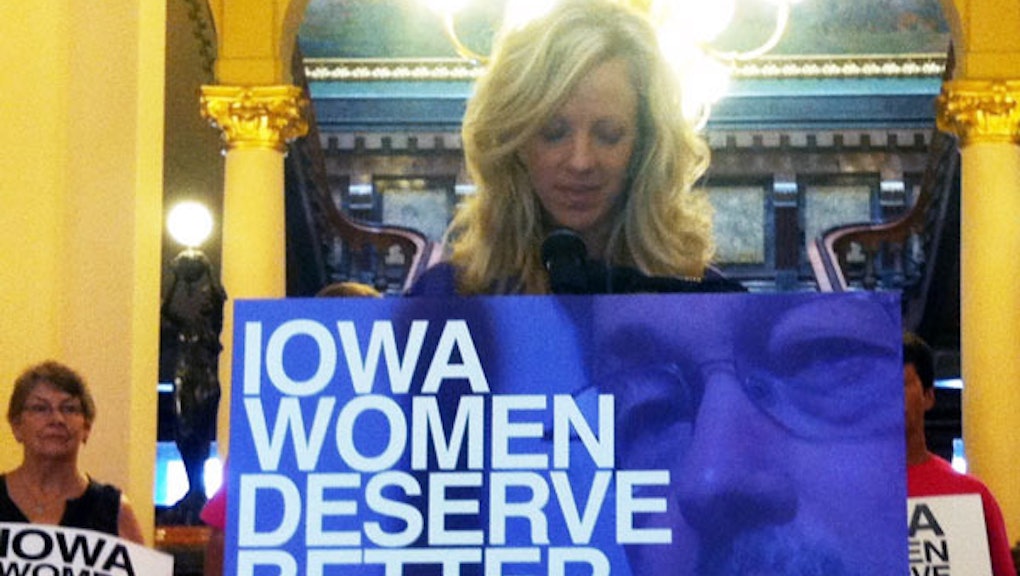 There are several reasons why a woman who wants to have an abortion would opt for abortion pills instead of surgery — and should have the right to do so. But this week, Iowa state lawyers and Planned Parenthood representatives will battle it out in the state courts to determine whether giving a prescription for abortion pills via video-conferencing is safe.

This is how video-conferencing works: If a woman chooses to go through this procedure, she would need to go to the nearest Planned Parenthood in the state and have a check-up. After video-conferencing with an abortionist in Des Moines, where Planned Parenthood's headquarters are located, the abortion pills may be released to her remotely if the abortionist is satisfied with the consultation. The patient can then take the mifepristone component at the abortion clinic and misoprostol at home to terminate the pregnancy. If she has any problems, she can contact a 24-hour hotline.

The battle comes on the heels of an Iowa Board of Medicine August declaration that a doctor must be physically present while administering these pills. This unfair tactic will make it more difficult for women to access these vital health care services, and continue to demonize helpful organizations like Planned Parenthood. In September, Planned Parenthood sued the Board of Medicine, contending that their decision to end tele-medicine in the state was a result of political motivation, with the aim to prevent access to early abortion. Conveniently enough, Iowa's governor, Terry Branstad (a conservative Republican opposed to all forms of abortion) chose all 10 members of the board. However, state lawyers are criticizing Planned Parenthood's claim of politicization, seeing that this "cannot satisfy petitioners' burden of proof." To politically confuse things even more, the board's response to Planned Parenthood was submitted by Attorney General Tom Miller, a Democrat and strong supporter of abortion rights.

Both sides are doing their best to defend their opinions. The Board of Medicine has declared that this process as dangerous, raising questions about the safety of the practice. Women who have taken these drugs have experienced hemorrhaging, ectopic pregnancy, and infections, which are sometimes fatal. It has also stated that they do not intend to limit access to abortions; in fact, they are now recommending the hiring of doctors in the 10 satellite clinics that currently administer video-conferencing abortions.

Planned Parenthood has a more passionate argument, suggesting that this rule would in fact limit women's access to abortions, especially those living in rural areas. Planned Parenthood also argues that women do have follow-up appointments and are properly examined by clinical staff. They also suggest that only a very small number of women have complained to state officials about their experience with the video-conferencing system.

It is fair to say that women in Iowa have easier access to abortion pills and other contraceptives due to the innovative nature of video-conferencing. More importantly, it allows women who may not be close to an abortion doctor to receive safe and careful treatment. Video conferencing allows women access to birth control consultations, birth control method changes, and information about sexually transmitted diseases, all of which is needed to help women maintain their sexual health.

The statistics speak for themselves. Dr. Jill Meadows, Planned Parenthood's medical director, stated that this tele-medicine system has helped more than 3,000 women in Iowa. She said, "While the number of abortions in Iowa has not increased since we implemented our tele-medicine program, the number of women accessing abortion before 14 weeks in pregnancy has. As a physician, I know that an abortion early in pregnancy is safer than an abortion later in pregnancy.”

Planned Parenthood's fight is far from over; in fact, even if the judge agrees to a temporary stay of the medical board's decision, it will face an uphill battle trying to overturn the rule. Appealing a government agency's decision in court is no small feat.

However, there may be some good news. University of Iowa law professor John Reitz suggested that the courts usually defer to the opinions of administrative agencies, as it is not the court's role to doubt the agency.

This debate is now on the national stage, with activists on both sides of this divisive issue paying close attention. It deals with the politics of reproductive rights, but more importantly, it deals with the lives of everyday women. Planned Parenthood is fighting for justice for these women. This week will tell if they get it.