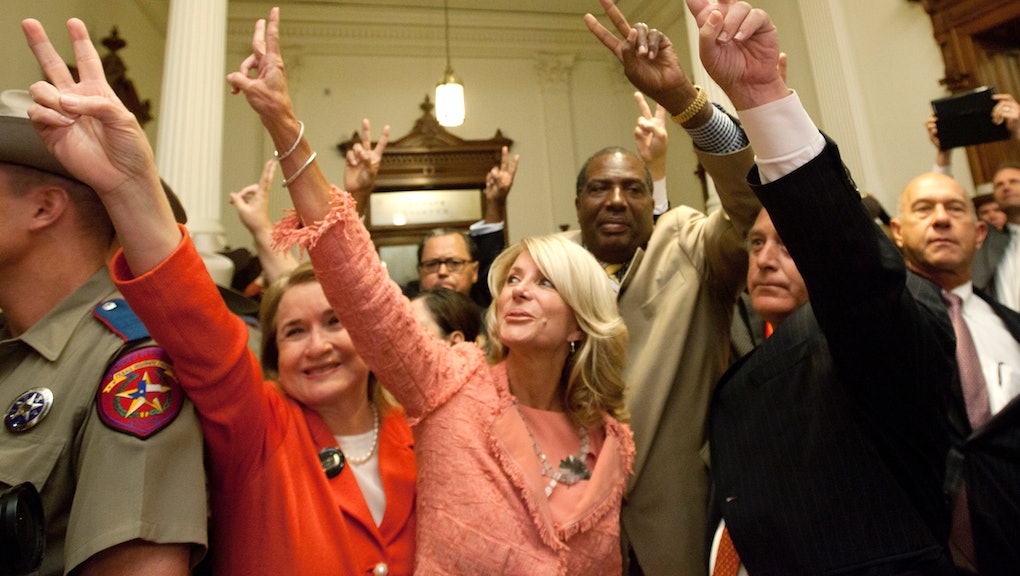 This Week Reminded Me Why I'm a Wendy Davis Fangirl

This week, a federal judge declared parts of famously filibustered Texas HB2 legislation unconstitutional, thus offering a temporary end to the emotional roller coaster that has been #TXlege. Basically, the court declared making that abortion providers obtain admitting privileges at hospitals within a 30 mile radius is unnecessary and would put “undue burden” on women seeking abortions. (Shout out to Wendy Davis for spending 13 hours explaining all of the other undue burdens women continue to face and initially blocking this misogynistic legislature.)

The state appealed (big surprise) and the court did not block the other challenged part of the law, which had to do with medication abortions. RH Reality Check has really wonderful coverage and explains the specifics of the case much better than I ever could. What I am prepared to explain, however, is why this state legislation in a traditionally red state thousands of miles away matters so much to me here in dark blue New York City.

Time Magazine recently said Texas is the future of the United States. A few years ago, that prospect would have absolutely terrified me, but a few years ago, I never would have believed that I’d spend all night streaming and livetweeting anything from the Texas State Senate Floor. The pundits are focused on the purple, but what’s happening on the ground in Texas is even better.

Wendy Davis was married, divorced, living in a trailer park as a single mother and was like, “Oh I changed my mind; actually I think I want to go to Harvard Law School.”

... and now Texas is doing the same thing.

As always, though the true power lies with the voters, whose faces are also changing. Today, MSNBC sites experts who say Wendy Davis can win if she bring together minorities, moderate and liberal white people and, you guessed it —women.

Wendy Davis’ filibuster was a battle, the appeals and counter-appeals on HB2 legislation is a battle. But the future of Texas? That's the war — and it's one that Wendy Davis will help us win.