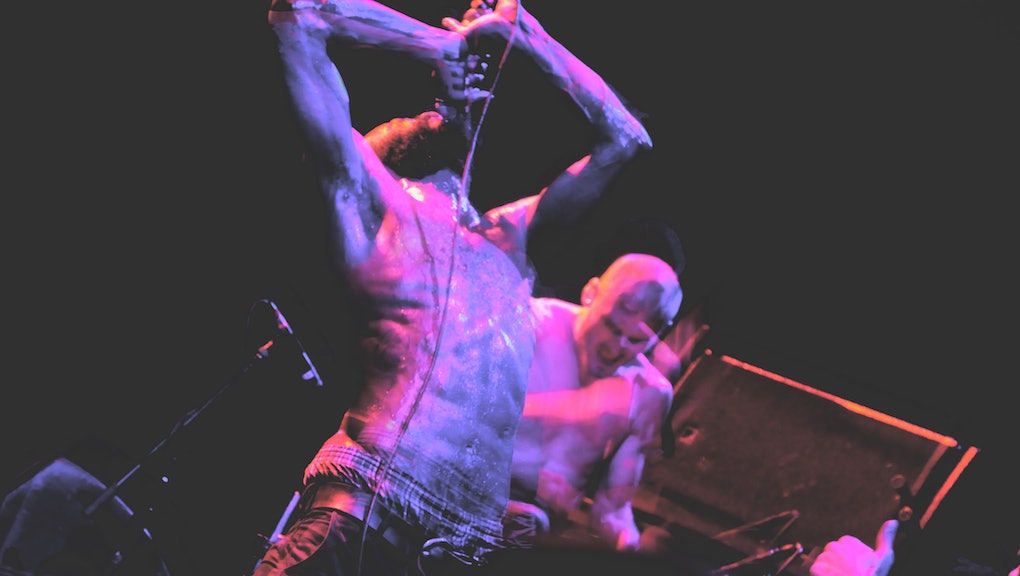 Music is what makes horror movies scary. Try watching a horror movie with the sound off and you will see how laughable the monsters really are. That music is usually dissonant, highly dynamic symphonic music, and — while it's extremely disconcerting and creepy — it's difficult to listen to on its own. It's stimulating, but it has no inherent musical meaning. No host, no matter how much of a boss he or she may be, can keep a Halloween party popping with the soundtrack to The Exorcist creeping past the keg. In order to craft the perfect psyche-shattering Halloween playlist, one must first understand the different varieties of fear.

"The three types of terror: [1] Gross-out: the sight of a severed head tumbling down a flight of stairs .... [2] The Horror: the unnatural, spiders the size of bears, the dead waking up and walking around .... And the last and worst one: [3] Terror, when you come home and notice everything you own had been taken away and replaced by an exact substitute. It's when the lights go out and you feel something behind you, you hear it, you feel its breath against your ear, but when you turn around, there's nothing there ..."

Terror comes from ambiguity. When the brain can't gather enough information to decide whether or not the creepy element in question is a threat or not, the terror rises. (For a deeper look at the psychological factors involved, check out Vsauce's video lecture "Why Are Things Creepy?"). For every one moment of horror in all the best scary movies, there are three moments of terror to build the tension and start the imagination reeling. A Halloween playlist must do the same.

Different genres of music are better suited to terrify, others better suited to horrify. The more aggressive musical genres — metal, punk, gothic rock — are confined to the horror realm. The blaring beats, double bass rolls, and screamed lyrics can only be translated by the brain as raw danger. These genres cannot reflect the eerie, ambiguous terror that makes horror movie music so thrilling and unbearable. Hip hop — as with the more odd varieties of electronic music like witch house, industrial, and grime — is more flexible and can produce terror, horror, or revulsion. Those beats have less of that stampeding feel, and more of a lurching gait that's danceable, but often disconcerting. The lyrical precision in hip hop allows for more exhaustive descriptions of disturbing scenarios and deranged characters that may be threats, or may be figments.

That vague and haunting hook is the sound of Earl's corrupted consciousness. Earl's character hasn't lost his conscience, he's merely letting it step aside so that Earl can loot and terrorize. Considering the rest of the Doris, it will definitely return to torture Earl later. Enduring this kind of selective sanity is an even more frightening prospect than losing sanity altogether.

The verses and hooks are so innocuous: Croissants are not scary. But those screams ... who do they belong to? Are they Kanye's voice as the boundaries of his mind stretch to the breaking point in an attempt to accommodate his godliness? Are they Kanye's inner demons dragging him down from the heavens, back into the torments of mortality? Is Kanye disemboweling his haters? Or is that just what God sounds like in the ears of the unenlightened?

Check out that album art: they look ready to trick-or-treat. Humans are capable of doing some pretty unspeakable things when they're lost. This song explores how low they can go.

This track takes those Reefer Madness vibrations to the next level. Children, if you smoke that herb, you're going to become a vile, sex-crazed madman with no teeth and only half a head of hair.

The original zombie rap gods. Gravediggaz are a 90s horror rap supergroup led by Wu-Tang mastermind RZA (the RZArector), Prince Paul (The Undertaker), and Frukwan (The Gatekeeper). A heavy dose of dark humor balances the death threats and demon summonings: "Intellectual killa, special majestical / Ropin' up the devils, have 'em hangin' from my testicles." Laugh in the face of death these guys.