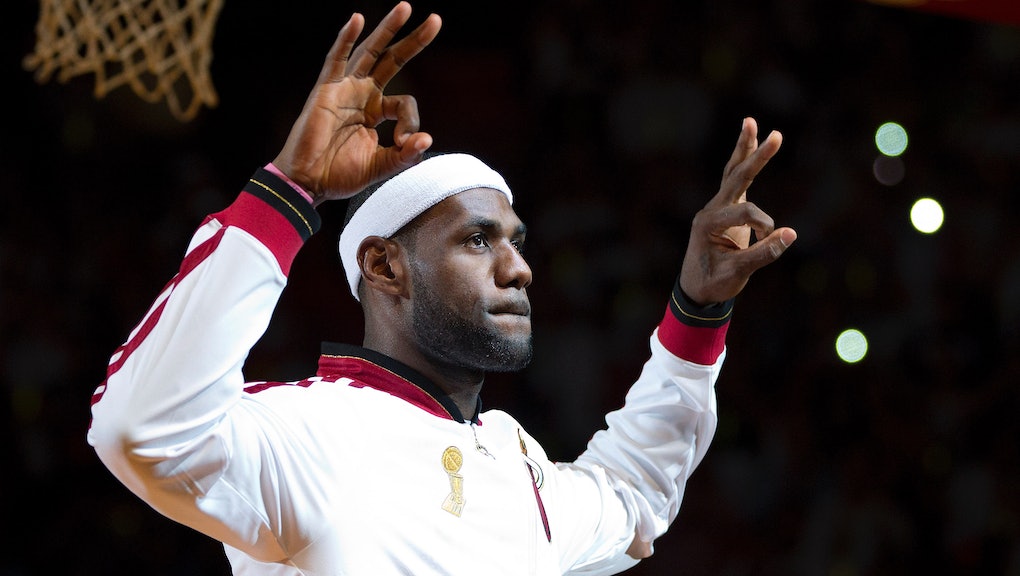 New LeBron Ads Do the Impossible: Make Him Appear Likeable

A few short years ago — hell, even prior to the 2012-13 NBA season — you couldn't surround LeBron James with enough cute children to make him a likable figure. It started in 2010 when he burned Cleveland and they burned his jerseys; it worsened when he wore diamond studs, postured like a famous rapper, and predicted "Not two, not three, not four, not five, not six, not seven ... ey" championships; it hit its peak in 2011 when we were all witnesses to his acceptance of his role as the "villain" of the NBA, and even pro sports in general.

Many of us faced that uncomfortable balance by the 2012 NBA Finals between sort of wanting LeBron to get the championship monkey off his back, kind of wanting to project our own shortcomings onto watching him fall short a second year in a row, and simply wanting to watch the neophytes of the Thunder upset the Heat.

But the first attempt at humanizing LeBron largely failed. Samsung released this ad at the beginning of last season for the Galaxy Note II, but LeBron comes off as nothing but holier-than-thou. Not to mention that nobody needs a phone the size of their face, and no one has used a stylus since the PalmPilot.

We get it. You have a huge home in South Beach, Magic Johnson has your number, kids in low-income communities chase after you like a god, and you drive your Porsche into the bowels of American Airlines Arena before strolling through the tunnel in custom Beats by Dre and sunglasses, Instagramming your gold kicks, and walking out to your "loyal" fans.

When the Miami Heat won their second title in a row this past summer, however, many of us felt at least an ounce of pride in LeBron — even a superstar can play with a chip on his shoulder, and that redeeming sentiment of proving critics wrong is something we can all sympathize with. But the champagne, the clubbing, the cigars, and we were somewhat lost again beneath him.

But prior to the start of this season, this happened:

First thing's first: Even Miley Cyrus can't go wrong with a beat from Mike Will Made It; but getting John Legend to sing over the top of a piano-heavy, emotionally stirring track called "My Shoes?" The song is plenty.

But this ad's genius and significance is its ability to humanize King James for the first time. You get to the end of the commercial without even realizing he was wearing that dorky bike helmet or that backpack that made him look like an oversized 16-year-old. But that's the point.

LeBron is a truly likable person in the ad, and just about every frame feels genuine.

This time, the children don't chase after the lofty image of the player as he drives by; they bike alongside the actual man. He enters American Airlines Arena this time to perfect his craft and he is imperfectly hard on himself (even the candy-red Lebron 11's come off less as fancy accessory than training tool). When he gives daps to those teens after the pickup game, it feels so much more real than when he "humbly" takes pictures with fans in last year's ad. And when he returns to his mansion and the gates swing shut, it's so much less a slap in the face from his wealth than it is a warm apology for returning home.

Samsung apparently wanted to redeem their ad campaign from last season and momentarily remove the King from his pedestal (or throne) as well. If you were watching the tip-off to the NBA season Tuesday night, you caught more than a few glimpses of this one, too.

This commercial is just as brilliant as Nike's "Training Day". It captures LeBron doing what we somewhat wish he really does when he is not nightly threatening a triple-double. No more awkward stylus and Galaxy Note II; instead, he and his wife look at family pictures on a tablet like normal people (who can afford tablets).

The ad's title, "At Home," is a perfect metaphor, too. We get this amazing glimpse into LeBron's home life, whether it is realistic or not, and we finally feel comfortably at home with the King.

Were the ads superfluous and painful after the 25th time during breaks in the games on Tuesday? You bet. But do they mark a significant turning point in the way we might begin to view — and actually like — LeBron James? Absolutely.

For the first time we almost feel like we are no longer holding up or looking up at (or negatively upon) LeBron. As the two ads perfectly symbolize, we are finally with him in a way. I'm not saying we're rooting for the Heat to win a third title in a row, but there is something so starkly different and cunningly timed about watching all those kids surround LeBron now.