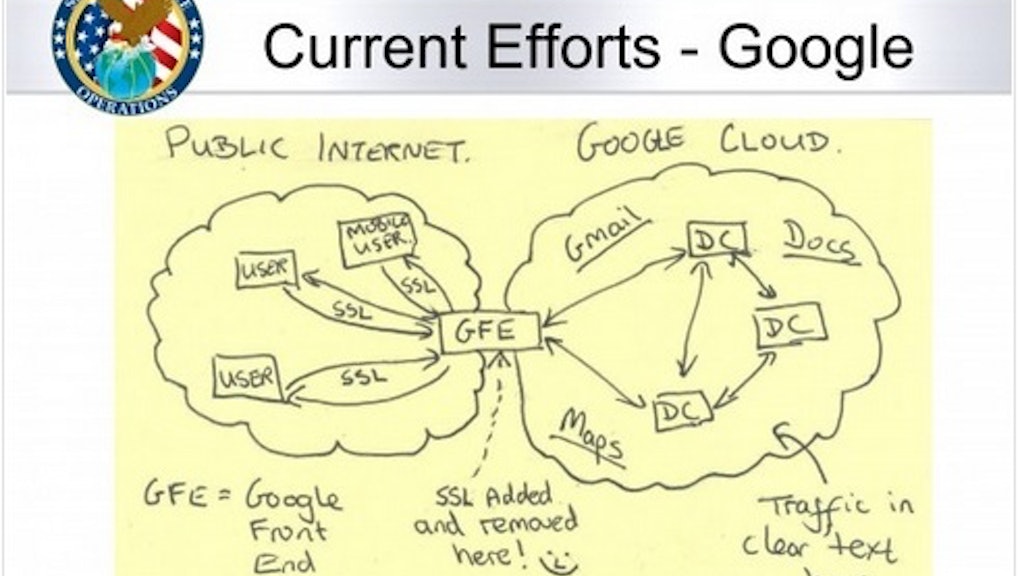 Were These NSA PowerPoints Made By Fifth Graders?

Another day, another major NSA revelation. The Washington Post has reported that the NSA has been secretly intercepting communications between the international data centers of Google and Yahoo. Both tech companies deny having knowledge of the NSA's activities, and the agency itself did not comment on the story.

First of all, this diagram looks like it was drawn on a sticky-note. Seriously? This was the best way our secret intelligence agency could convey its infiltration of Google?

But more important is the arrow in the middle that points to GFE (Google Frontend Server).  As is evident, the GFE connects users to the cloud containing a mass of information. The other end of the arrow states, "SSL added and removed here." A smiley face appears next to it.

Yes, this official government slideshow comes with a smiley face.

For you non-techies, SSL stands for "Secure-Socket Layer." It is a security technology that protects data transmitted across the internet. And the NSA is breaking through it. This is bad enough, but they are doing so carelessly, which the smiley face indicates.

This isn't the first time that an NSA slideshow has been revealed and found to be terrible. When PRISM first broke, some of the slides there were nearly just as awful. Here's an example:

Look at all the company logos scattered across the top. This timeline is almost unreadable. What's the y-axis exactly? The rest of the slides in the presentation aren't any better.

Needless to say, the NSA's clandestine activities are certainly more worrisome than their poor digital skills. But if it's going to collect vast amounts of personal data about us, can the agency at least present itself in a more professional manner? It shouldn't be that hard.