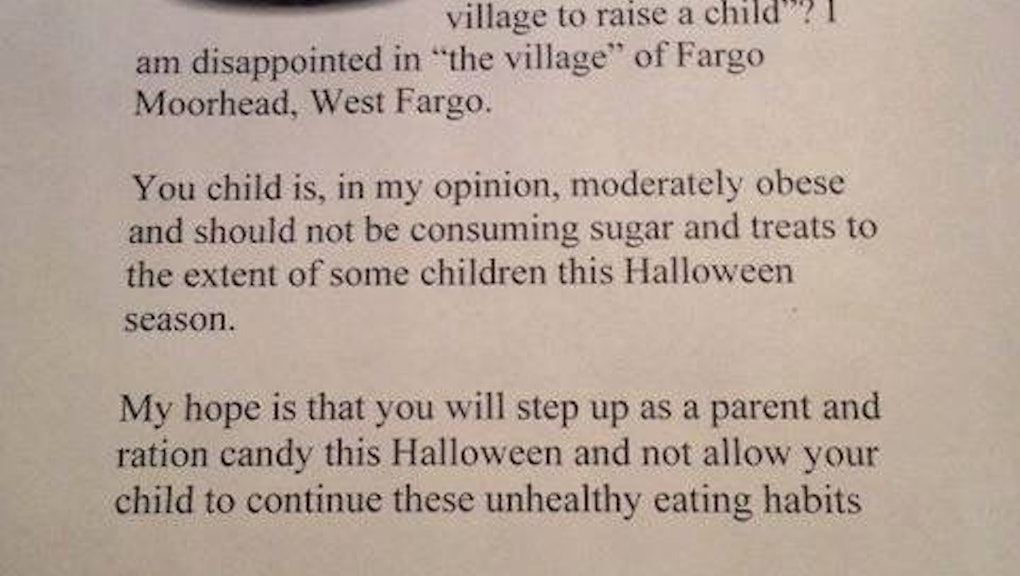 A woman in North Dakota is concerned with the weight of kids in her town, and has decided to show it in most cruel way possible.

Instead of giving kids candy on Halloween, she's giving them a note chiding their parents for allowing their children to take part in the night of tick-or-treating. Seriously. Here's a picture of the note:

Her words, "My hope is that you will step up as a parent" are utterly condescending and inappropriate to utter on Halloween. Why does this woman think she can criticize parents like this? The letter is outrageous to distribute at any time, but it is even worse on Halloween.

The woman took to the airwaves as well she told a Y-94 morning radio show, "I just want to send a message to the parents of kids that are really overweight ... I think it's just really irresponsible of parents to send them out looking for free candy just 'cause all the other kids are doing it."

Is Halloween the most healthy night? Of course not! But, it's an annual tradition. Rationing candy intake during that night will do little to curb obesity. Instead, it will deny children one of their favorite activities of the year. If some parents want to send a message by doing that, so be it. Telling other parents to do so crosses the line. This letter is simply a disgrace.