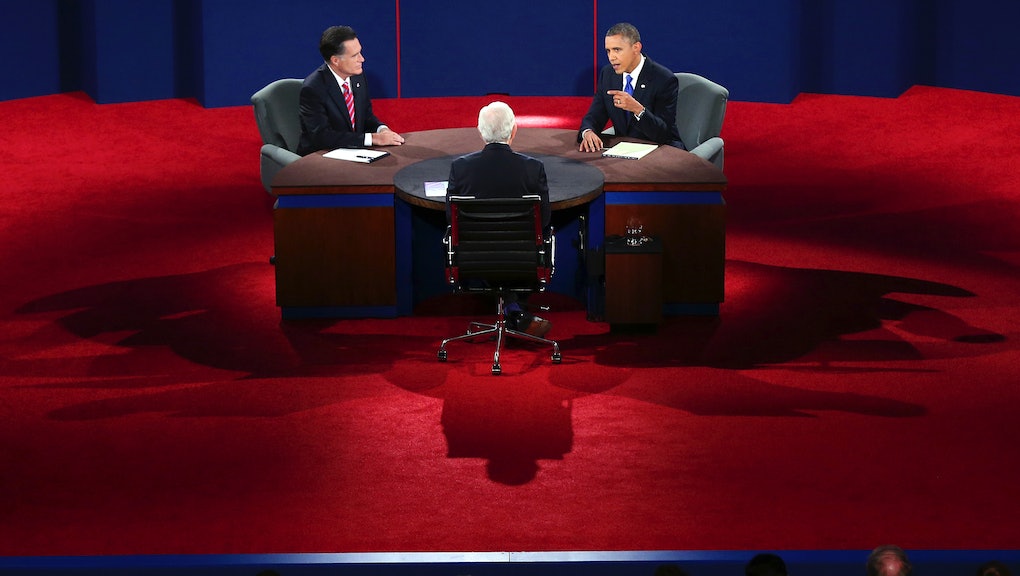 Mitt Romney is Still Trying to Distance Himself From Obamacare, But It Won't Work

Former Massachusetts Governor Mitt Romney took to Facebook on Wednesday to broadcast his latest criticism of the Affordable Care Act (ACA). In status update criticism of the ACA, Romney claimed that if President Obama "actually learned the lessons of Massachusetts health care," many Americans would not lose their insurance plans, see premiums increase, and the rollout of HealthCare.gov would not have been "a frustrating embarrassment."

Romney's social media rant was sparked by Obama's visit to Boston's Faneuil Hall on Wednesday, in which Obama spoke at the location where Romney enacted his own health care law in 2006. Romney is intent on highlighting the differences between "Romneycare" and "Obamacare." He argues that health care reform is best accomplished with bipartisan support, employer feedback, and without raising taxes. He claims this was accomplished in Massachusetts's health care reform.

How accurate are Romney's criticisms? Romney claims that millions of Americans have lost the insurance they were promised. However, it is too early to know precise numbers, though there is evidence that many Americans will have their plans cancelled, and even that the Obama administration was aware that this would happen. According to NBC News, multiple sources "deeply involved" in the ACA have said, "50 to 75% of the 14 million consumers who buy their insurance individually can expect to receive a 'cancellation' letter or the equivalent over the next year."

Romney also claims that premiums are going up for millions of people. Again, it is too early for precise numbers, but many people are being forced to switch to newer, more expensive health plans. The Obama administration argues that these rate increases will be subsidized for families making less than 400% of the poverty line. Those above that rate will likely see their premiums rise as a result of the law.

Romney's claim that his plan for health reform in Massachusetts received bipartisan support and input from businesses is true. The vote for the 2006 Massachusetts reform health care law was almost unanimous — 192 out of 194 lawmakers were in favor of it. The health care law was shaped by a group of special interests including business interests who faced reduced fines for not covering employees.

However, Romney's claim that he did not raise taxes is false. The Supreme Court ruled in 2012 that the penalty associated with the individual mandate in the ACA is a tax. Massachusetts health care law also has an individual mandate and an associated penalty. Therefore, Romneycare created a new tax, contrary to the former governor's assertion on Facebook. Romney even admitted as much in a 2008 Republican debate: "Yes, [we imposed tax penalties in Massachusetts] we said, look, if people can afford to buy it, either buy the insurance or pay your own way; don't be free-riders."