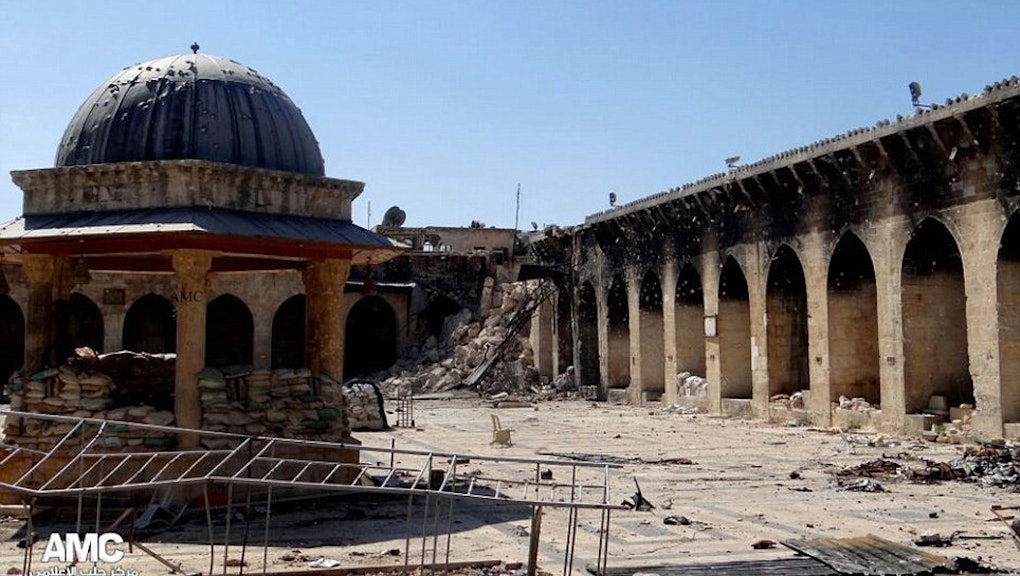 5 Historical Monuments Have Been Destroyed Forever During Syria's Civil War

As Syria's tragic civil war continues without a resolution in sight, the conflict's death toll continues to soar. But this isn't the only disastrous consequence of the conflict — Syria's breathtaking historical and architectural heritage is being blasted to pieces by the ongoing civil war, too.

UNESCO has implored both sides to respect and protect historical artifacts. Let's face it, though — given Bashar al-Assad's willingness to ruthlessly slaughter tens of thousands of his own citizens, it's unlikely that he will show more respect for his country's historical monuments.

Here are five of the most significant sites and buildings that have been damaged or destroyed in Syria's civil war:

Located in the old city of Aleppo, the Umayyad Mosque is another one of Syria’s UNESCO World Heritage Sites; it is also one of the oldest and most important mosques in the world. Regime and opposition forces have been battling for control over the building, absolutely thrashing it in the process. The minaret, which was almost 1,000 years old, was finally toppled earlier this year.

In an interview with the Daily Mail, Helga Seeden, professor of archaeology at the American University of Beirut, put this loss into context: "This is like blowing up the Taj Mahal or destroying the Acropolis in Athens. This mosque is a living sanctuary... This is a disaster. In terms of heritage, this is the worst I've seen in Syria. I'm horrified."

This medieval souk, the largest covered historic market in the world, was badly burned and partially destroyed during fighting that began in September of 2012.

This mosque, founded in the early eighth century by the second caliph of Islam, Omar, is one of the oldest mosques in the world. During the early days of the war, it served as a field hospital and sanctuary for demonstrators. In 2013, its minaret was destroyed. Both sides allege that the other was responsible for its destruction.

One of Syria’s six UNESCO World Heritage Sites, Crac des Chevaliers is one of the world’s most important medieval castles still in existence. Opposition fighters have been struggling to keep their hold on this strategically important fortress for over two years, drawing devastating shelling from regime forces. Having been bombed as recently as Oct. 21, 2013, this devastation has no end in sight.

As opposition forces fight with the Syrian Army in and around this ancient desert oasis, the breathtaking ruins have been rocked by shells, mortar bombs, and rockets.