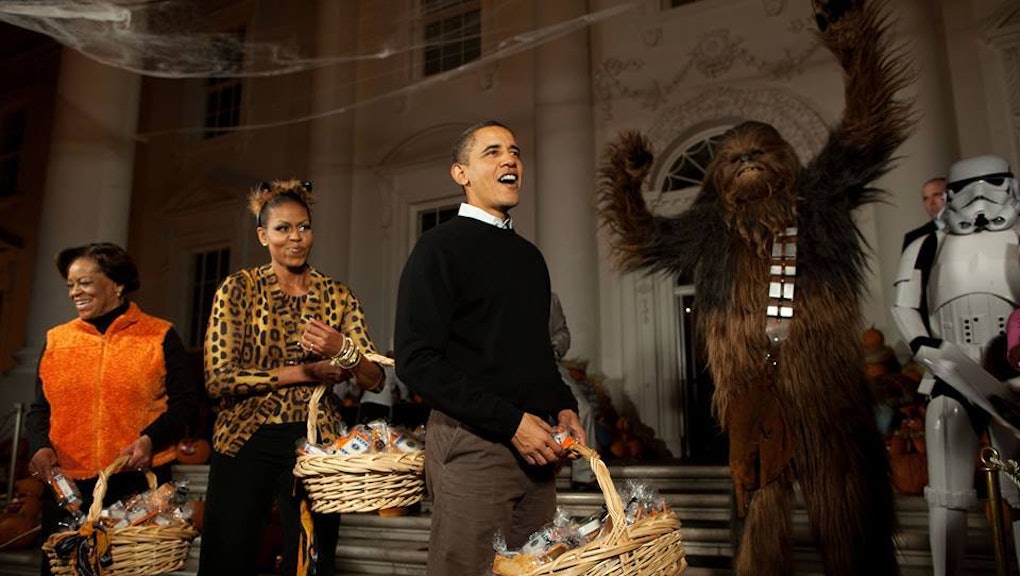 Ever been at a loss for how to handle those awkward silences that come in conversation at a Halloween party? You know the kind — the ones that happen before everyone is hammered enough to throw social norms to the wind, get up on the kitchen table, and start twerking at one another? Fear no more! Use these five foreign relations topics to kickstart the convo.

1. Screaming From The Sky

There’s no way your punch bowl with a plastic spider floating in it is scarier than the faint overhead buzz of a Predator drone armed to the teeth with Hellfire missiles — unless, of course, you’re having your party in Pakistan’s tribal areas. U.S. drone strikes have now been classified as potential war crimes according to Amnesty International and Human Rights Watch. Is the U.S. off its rocker, killing willy-nilly in the name of national security? Or is a certain level of collateral damage acceptable in this campaign? Find out what the schmuck in the “free breast exam” costume has to say about it. On second thought, call in a drone strike on him instead.

The German Chancellor lambasted the U.S. this week over revelations that the NSA has been tapping her cell phone. While nobody should be surprised that allies spy on each other all the time, rarely do you hear of a head of state of such an important partner getting bugged. Is Merkel right to be angry? Will this seriously degrade relations or lead to further breakdowns in trust between the U.S. and its Schnitzel-munching ally? Should President Obama finally take responsibility for at least one scandal that has gone on under his watch? There’s a pattern of pleading ignorance by our president when it comes to such things, and although his staff is ultimately responsible for jumping on a sword when things go awry, nobody seems to have gotten that memo. I bet the girl in the ironic Rubik’s cube costume wants to weigh in! She’s hard to figure out, people … get it?! Wait … do you get it?

Iraq is in trouble. It has now been two years since U.S. forces left the country, and sectarian violence is on the rise. This past Sunday alone, nine car bombs killed dozens of Iraqis throughout Baghdad. This shouldn’t surprise anyone, since the country has been carved into various pieces by imperial powers in ill-conceived attempts to make the country more agreeable to Western interests for decades. These restructuring efforts have created conflict where no conflict existed before, but where it is now raging at frightening levels. Further, the nightmare in Syria is causing violence to spill over the border at an alarming rate and is turning Iraq into a deadly reincarnation of what it was during the worst periods of its civil war in 2006. Given the U.S.’ giant role in causing this problem in the first place 10 years ago, what is its responsibility to rein the violence in? I bet the kid in the corner who didn’t wear a costume is perfect for how long it will take to sort this out!

China just endured its first major suicide attack. On Monday, three men in an SUV drove through barriers and other obstacles in Tiananmen Square, running over and killing three people and injuring 38. The Square is a symbol of China’s authoritarian rule and has been the scene of many a demonstration, the most iconic of which was in 1989 when a man stood in front of a tank column to protest the government’s despicably violent crackdown on pro-democracy protesters. The men from Monday’s attack are thought to be Muslim Uighurs from China’s Xinjiang province, an area that typically resents China’s rule over their territory. So is China’s authoritarianism going to cause further bloodshed? Or is the government still willing to organize brutal crackdowns at the first sign of unrest? Has anything really changed since 1989 or has the country’s unprecedented economic growth simply become a veil over a troubling democracy deficit? Ask the guy dressed like Chairman Mao to weigh in.

The UN has officially confirmed an outbreak of polio in Syria. Reports state that 10 of the 22 children thought to have the disease have tested positive, with more test results for others coming in the next few days. Given the massive outpouring of refugees from Syria’s borders, panic in neighboring countries is understandable and the UN is already making arrangements to vaccinate 2.4 million children in the country. Is Syria becoming a failed state? Should the international community step in once and for all to change things in the country? Could Syria become a benchmark for successful UN intervention, given that the plan to destroy the Assad regime’s chemical weapons stockpiles has gone well so far? Rally around the fog machine and get some debate going!