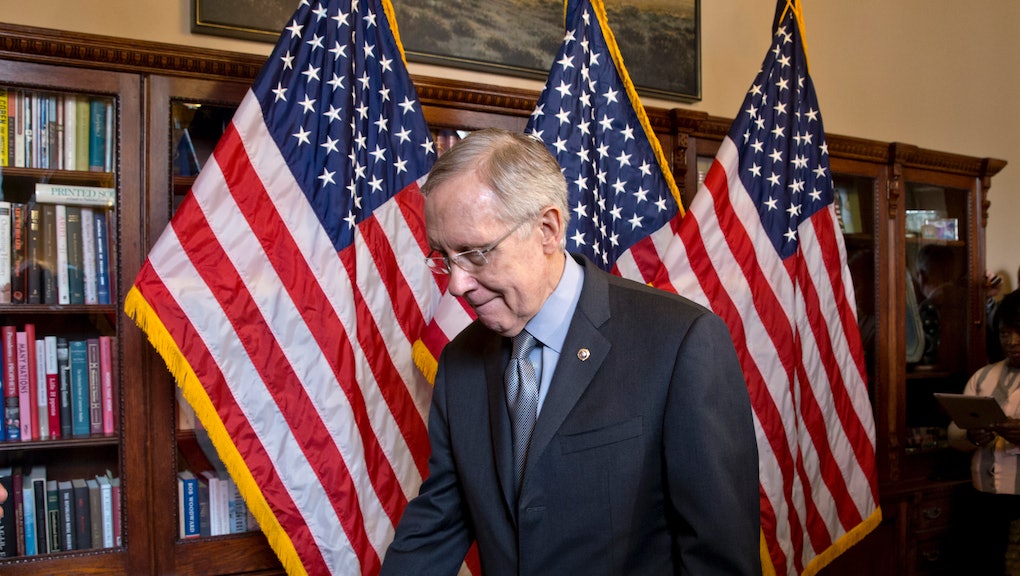 Thursday yielded yet another “nuclear option” empty threat from Democratic Senators. Two of President Obama’s high-profile nominees were blocked by a GOP filibuster threat in the Senate on Thursday. Patricia Millett was being nominated to the D.C. Circuit Court of Appeals, a court second only to the Supreme Court in its stature. Her nomination would have tilted the court 5-4 in favor of Democrats.

Also on Thursday, North Carolina Representative Mel Watt was being considered for the Federal Housing Finance Agency, which oversees housing finance behemoths like Fannie Mae and Freddie Mac. A majority of Senators approved of both nominees, but they fell short of the 60 votes necessary to stave off a filibuster effort by Republicans. The case of Watt’s failed nomination is significant – it was the first time that a sitting member of Congress was denied an appointment since before the Civil War.

These tactics have infuriated Democratic Senators and caused them to reconsider the “nuclear option” – altering the Senate rules so that only 51 votes would be needed to approve nominees rather than the 60 needed to block a filibuster. But, this happens often. As recently as July, Senate Majority Leader Harry Reid (D-Nev.) threatened to use the nuclear option when seven of Obama’s nominees were in danger of being blocked by Republicans.

On Tuesday, Patrick Leahy (D-Vt.) said that pressure to change the Senate rules would be “insurmountable” if Millett and Watt were blocked. After they were blocked on Thursday, Reid vowed to push the Watt nomination again noting, “I hope my Republican colleagues will reconsider their continued run of unprecedented obstructionism.”

Democrats argue that the opposition to these candidates by Republicans has been politically motivated and is not based on the actual qualifications of the candidates. Dianne Feinstein (D-Calif.) stated, “The judiciary is too important to play partisan games with, and that’s exactly what’s going on here.” In relation to the Millett nomination, Senator Chuck Grassley (R-Iowa) countered, "This is the court that can rule for or against the executive orders of this administration. We need to maintain checks and balances of the government." And with respect to the Watt nomination, Senator Bob Corker (R-Tenn.) argued, “A technocrat, not a politician, should lead the FHFA.”

Clearly, these candidates have proven themselves qualified for the positions for which they have been nominated. But it is not clear that the ideologically-driven votes of the GOP are necessarily inappropriate. And would it really be surprising if either political party let their political beliefs affect their votes on the president's nominations?

Either way, the “nuclear option” is an empty threat. CNN has confirmed that, for now, Democratic Senators will not be invoking a rule change. Senator John Boozman (R-Ark.) offered perhaps the best piece of wisdom on this situation: "The only problem is that the Senate will not always be controlled by Democrats. ...I think that's why [the nuclear option] hasn't been done in the past, because both sides realize that this is something that would be used against them."