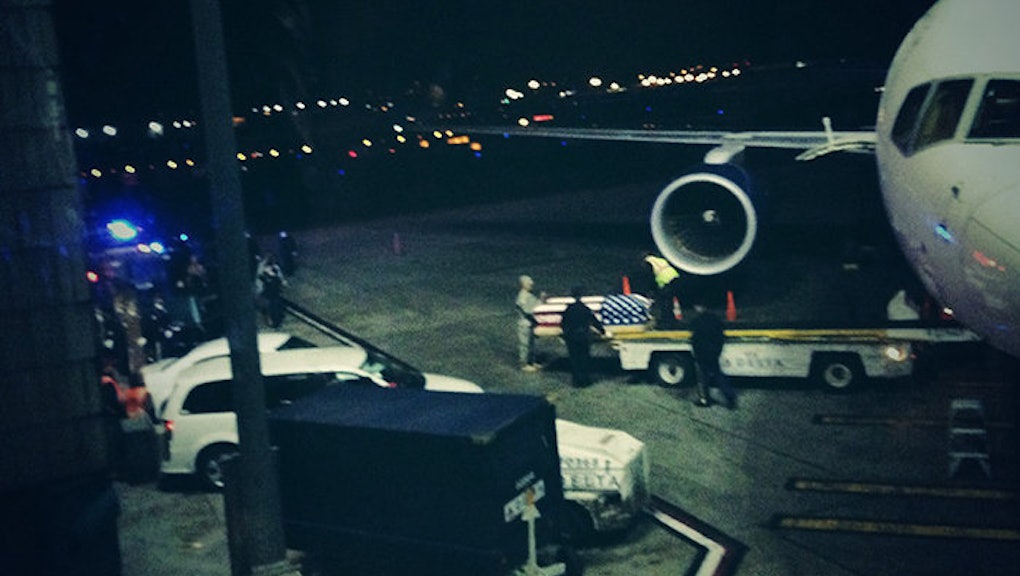 Not a whole lot of things can keep commercial airliner travelers from being overly rushed and tense.

Yet about 45 minutes prior to landing in Los Angeles on a flight from Atlanta, Ga., a Delta Airlines pilot announced to the passengers that the airplane was transporting a fallen solider. And it turned out that the public's respect for one of our nation's finest provided a patriotic exception to the general trend of hurried and disrespectful airline traveers.

The passengers were informed not to worry if they saw fire engines near the arrival gate, as it is customary to honor fallen soldiers with a water-cannon salute and that one would be used to honor this soldier. Johnny Jet, a travel-writer aboard the plane, explained that water-cannon salutes commonly are used for celebratory occasions, but that this time, the "water glistening on the windowpanes looked like tears."

The pilot asked that the passengers remain seated and allow the military escort to disembark first. Upon arrival, another military officer boarded the plane, addressed the escort at attention, then turned to speak to the rest of the passengers and said, "It is a sworn oath to bring home, to the family, the fallen. Today you all did that, you are all escorts — escorts of the heart."

The most extraordinary part of it all happened after the airplane parked at the gate, a point in time during which many travelers push and plow their way through the crowd to be the first off of the plane.

This time, however, no one got up. Everyone was silent.

Instead, passengers gathered by the window to pay their respects to an American hero and watch as the honor guard removed the flag-adorned casket.